We had a slow start Friday morning which was great considering the busy few days we just had. We chilled and headed to Starbucks beside our hotel. I finally got the last two blog posts up which made me very happy. The internet in this hotel is so bad but the rest of the hotel is so nice! After Starbucks I grabbed an amazing pizza from Pizza Hut for $3.50 and it was so yummy. Our game plan for today is to make our plan for the Yee Peng Lantern Festival. The city is covered in colourful lanterns but it’s almost a secret to find where to go! We are going to ask around and find out the scoop. First things first… I had to stoop to tourist level and finally buy a selfie stick. I had to guys. It’s the only way I was going to get any good shots in the crowds of people tonight. And it was only 7 dollars.

I wanted us to cram some last minute things to do in Chiang Mai so I found a walking tour online that showed some main attractions. Just what dad wanted… more temples! We started with the Three King Monument.

We started walking and randomly came upon this really pretty temple that wasn’t even on the walking map I had. It was so peaceful and we were basically the only ones there. 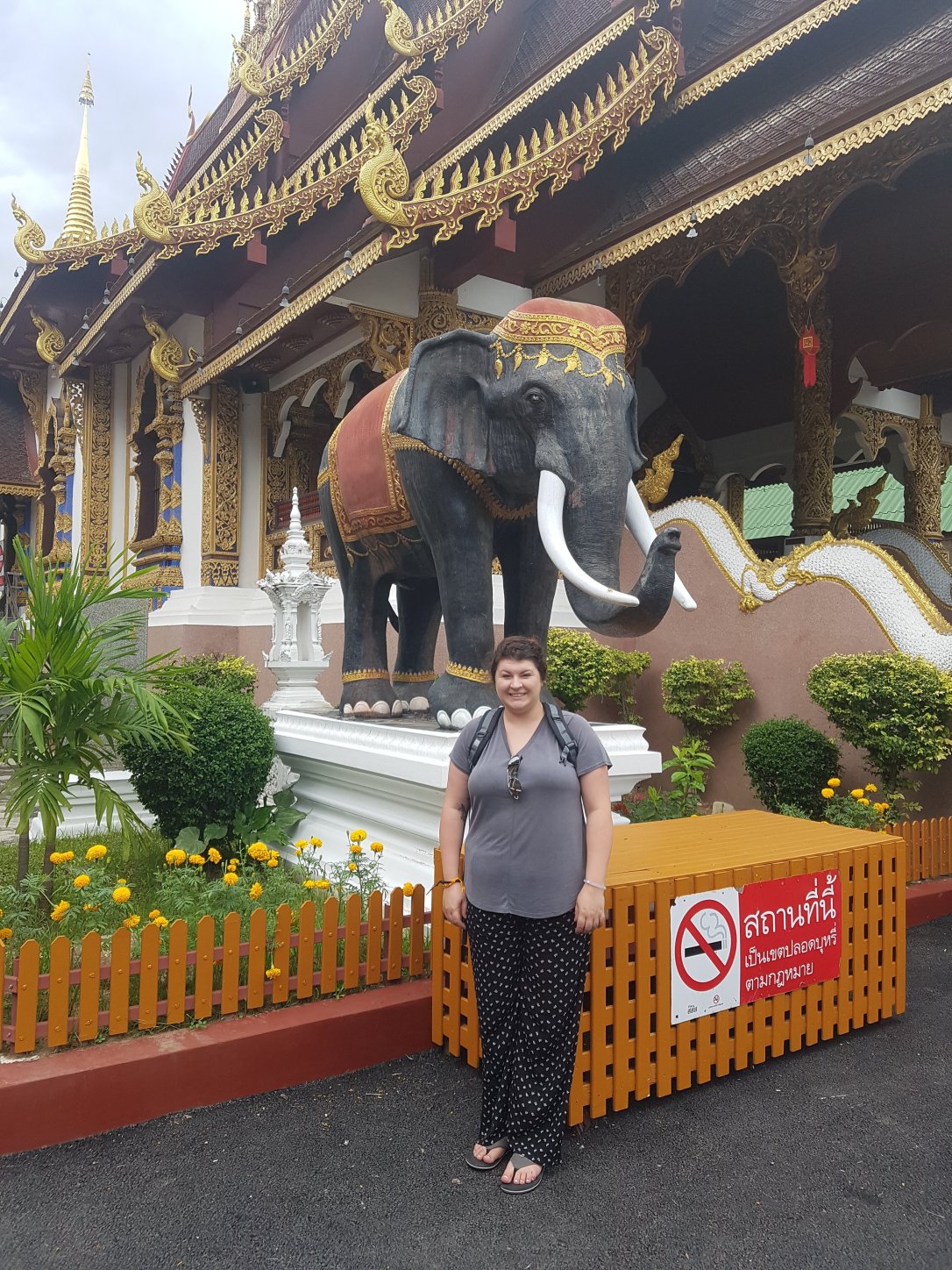 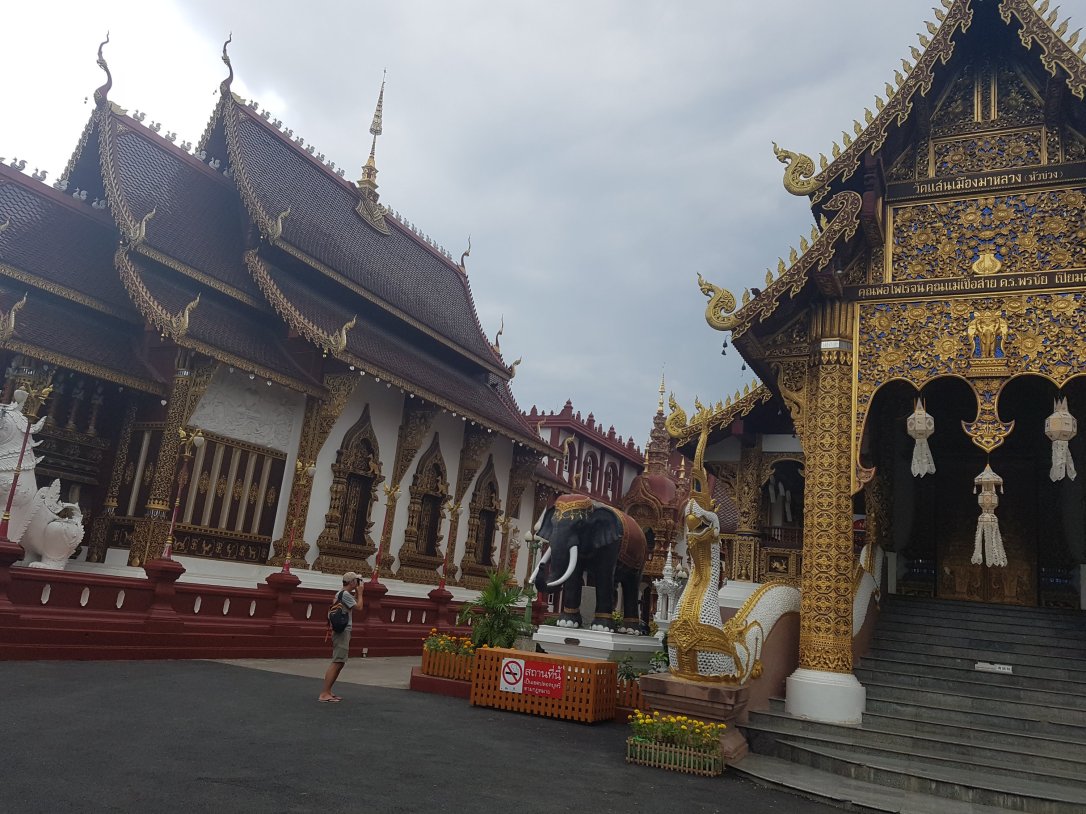 We kept walking and stumbled upon the Women’s Massage Centre for ex prisoners. I had heard about this place on many blogs and it’s highly rated on Trip Advisor. We had never planned on going but it seemed like a good idea once we saw it! So what it is…it’s a place to get massages but the masseuses are women who were in prison. This is a place they can come to work to reenter society and earn money once they are out. It sounds sketchy but it’s actually really nice and it’s for a good cause. We asked for foot massages ($7 CAD for 1 hour) and they told us to come back in 45 minutes. Dad was hungry so we walked a block down and found this really cute café. I had the best strawberry banana smoothie I’ve ever had.

We walked back to the massage place and enjoyed our hour long foot massages! 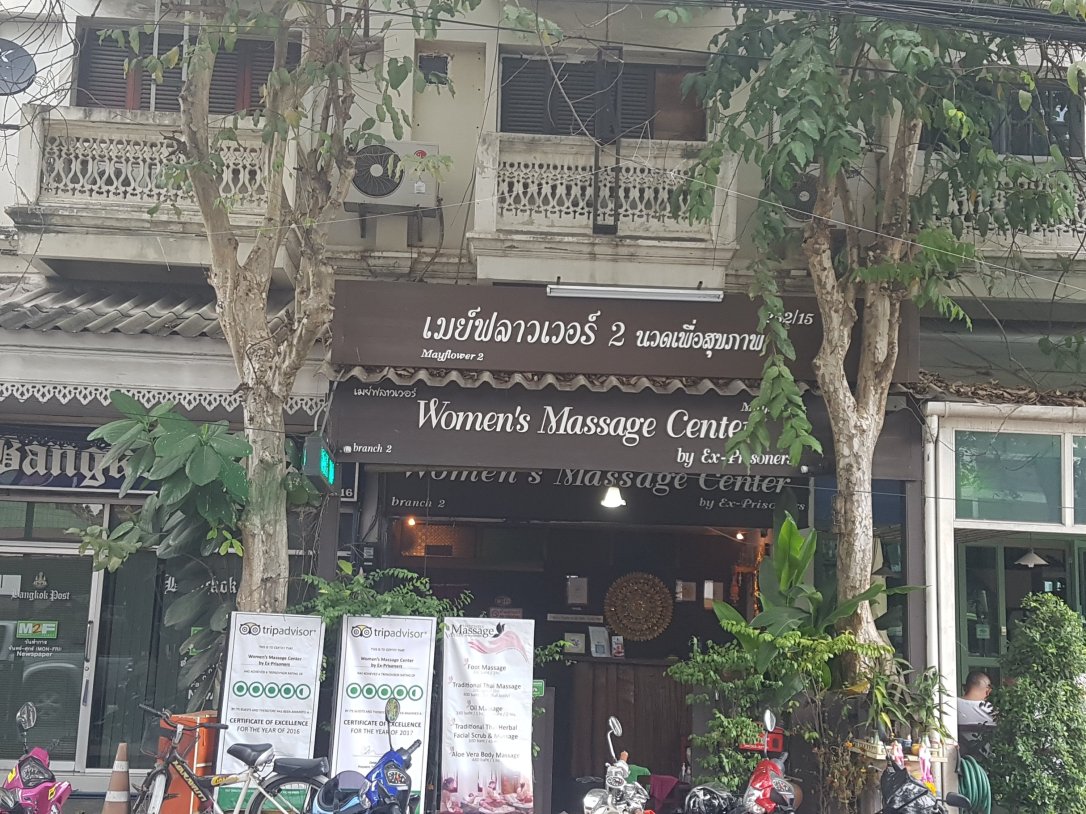 Our feet felt rejuvenated and let me just say I’m happy I didn’t get a full body massage. I could see people being massaged and they were being moved in impossible directions. Legs over their heads and arms wrapped around their bodies. The ladies just climbed all over them and cracked their backs and necks. It was hilarious. At one point the ladies sat behind the people, pressed their feet into their backs and pulled back on their arms to stretch them out. I don’t think I could have handled that though I’m sure it felt good after!

We kept walking and I wanted to find this temple that was on the walking map. Once we got there, there was an entrance fee and our hearts just weren’t in it so I just took a picture from outside the gate. I think it’s safe to say that I am also templed out now! 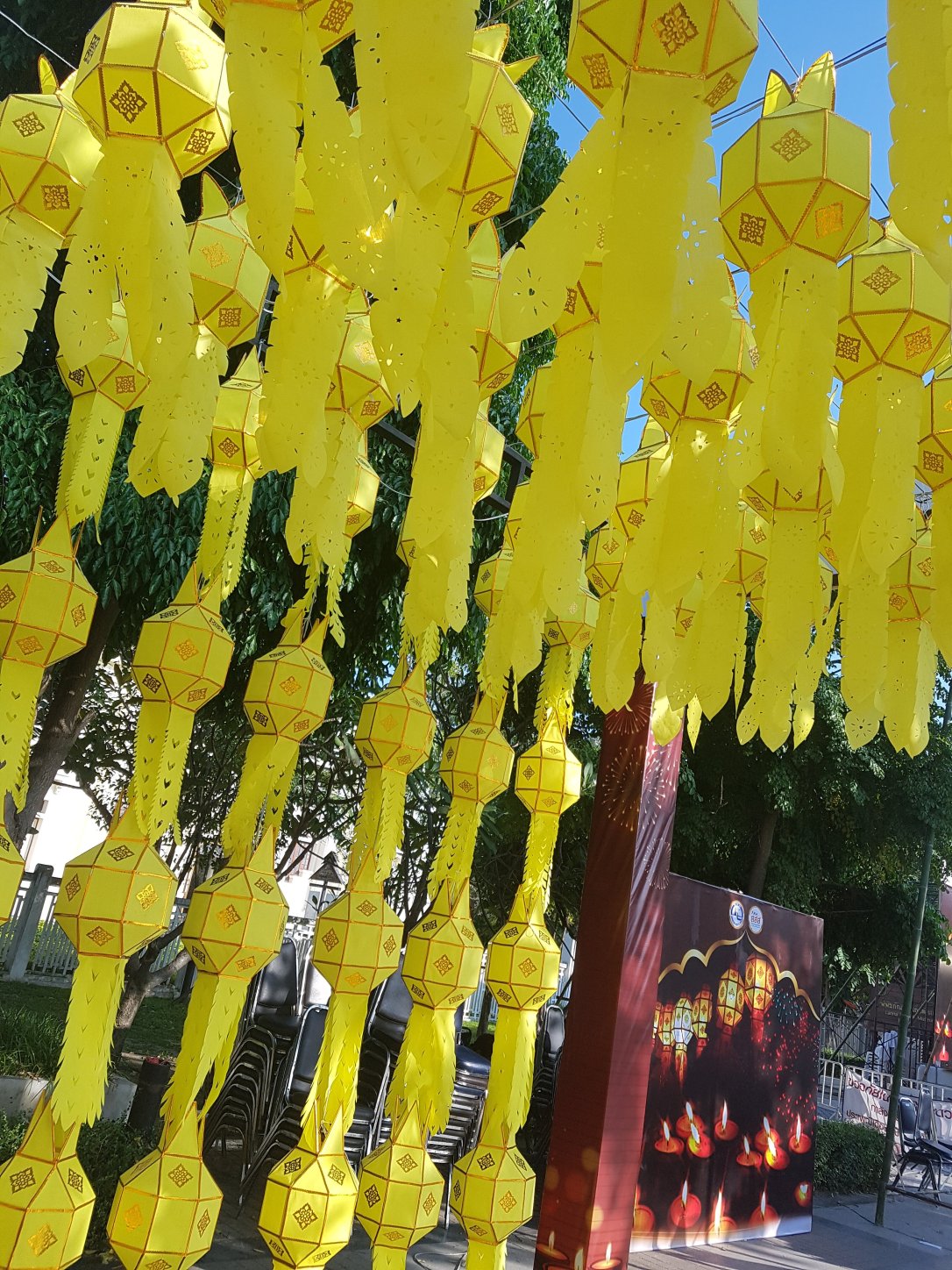 It was getting closer to the time we wanted to head to the festival, so we caught a songthaew back to the hotel to make a game plan. We googled and found a couple of tips but I still couldn’t figure out the location of the actual lantern release. All through the old city I could see colourful lanterns hanging over the moat/canal so I assumed this was where it would be. Good thing I asked at the front desk! He showed me on the map the actual location and it was the actual Ping River which is outside of the old city. 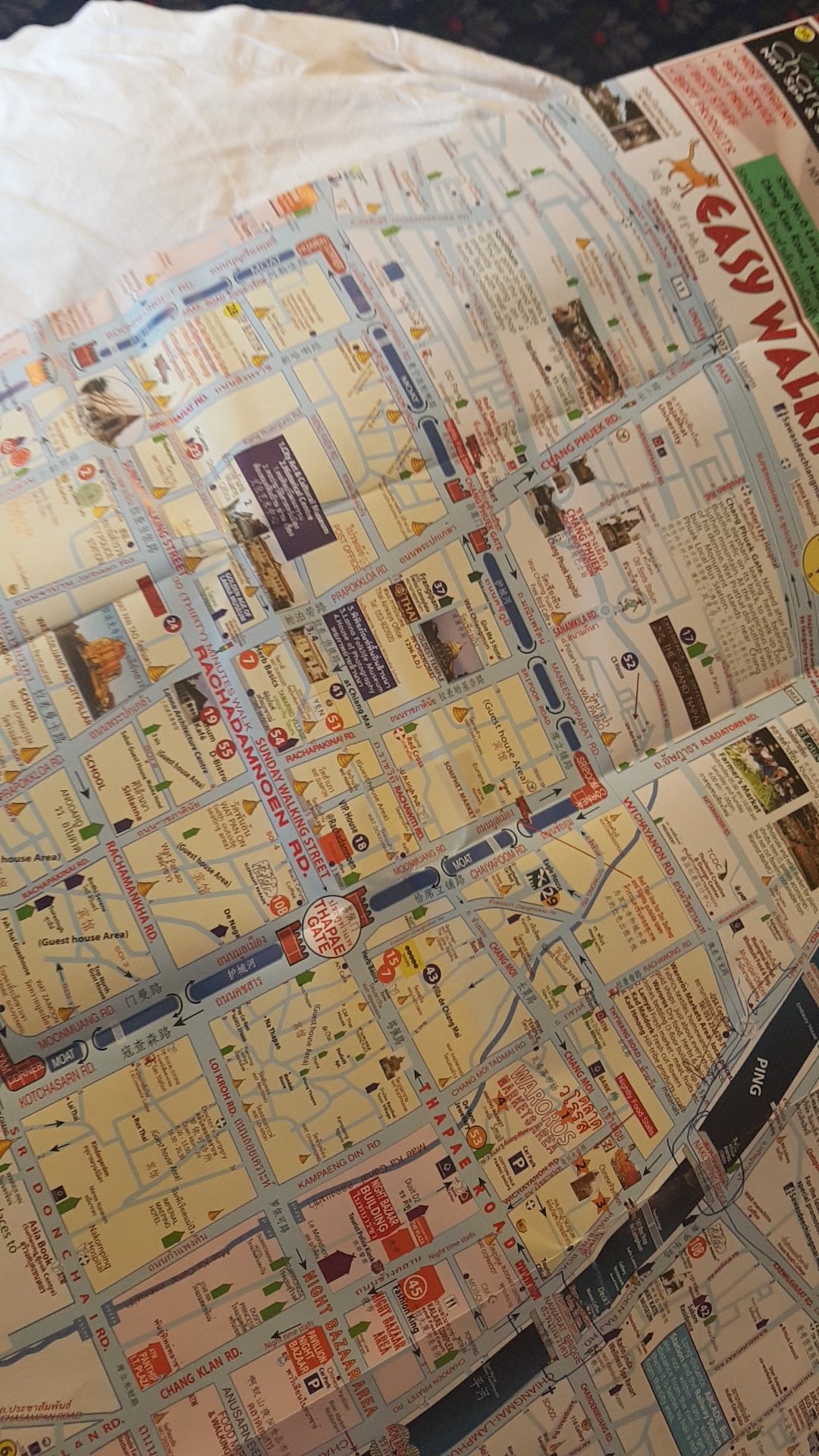 We charged up our electronics, loaded a new sd card into the go pro and got freshened up. Time to go!!

We got the driver to drop us off at one of the bridges close to the busy street. People were starting to gather everywhere. Not only is it Yee Peng today, but it is also Loi Krathong, where people send floating flowers and candles down the river. I think the point of Loi Krathong is to rid yourself of the bad vibes and send them away down the river. Then the lantern goes up and brings good luck upon you.

They are very beautiful and looked really neat floating down the river in the dark. We found our lanterns near the base of the bridge and bought 2 for only 30 baht each (about a dollar).

We went up on the bridge and found our spot for the night, right in the middle with a view of everything. We could see both sides of the river, and both edges of the shore.

Now the lanterns are not allowed to be released until 7pm. Only between 7pm and 1am tonight can they be sent up. This is because the airport prevents any airplanes from flying over Chiang Mai during this time. But of course, a couple of people in the crowd decided to start early. Every few minutes a single lantern would float by and it was so pretty. Some guys beside us on the bridge sent one up and it was really neat. Then all of a sudden the police came and blew out everyone’s lanterns because they had to wait until 7! What a waste! It’s better to wait anyways because everyone sending them up at the same time is the whole point.

In the distance, more and more lanterns were starting to go up. I’m assuming that these were coming from the university. They hold a private lantern festival that’s like $250 each. I tried getting tickets like 6 months ago but they were already booked up! People in the crowd started setting off firecrackers too! The excitement was in the air and it was still half an hour until 7:00! 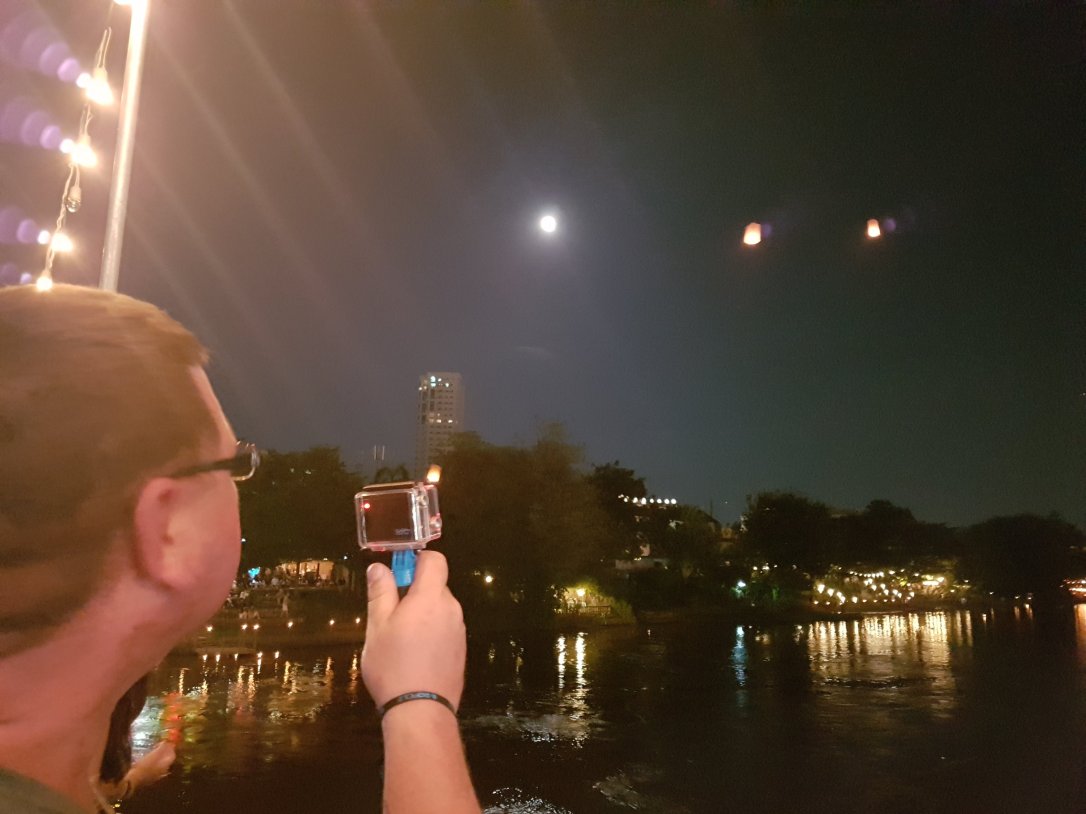 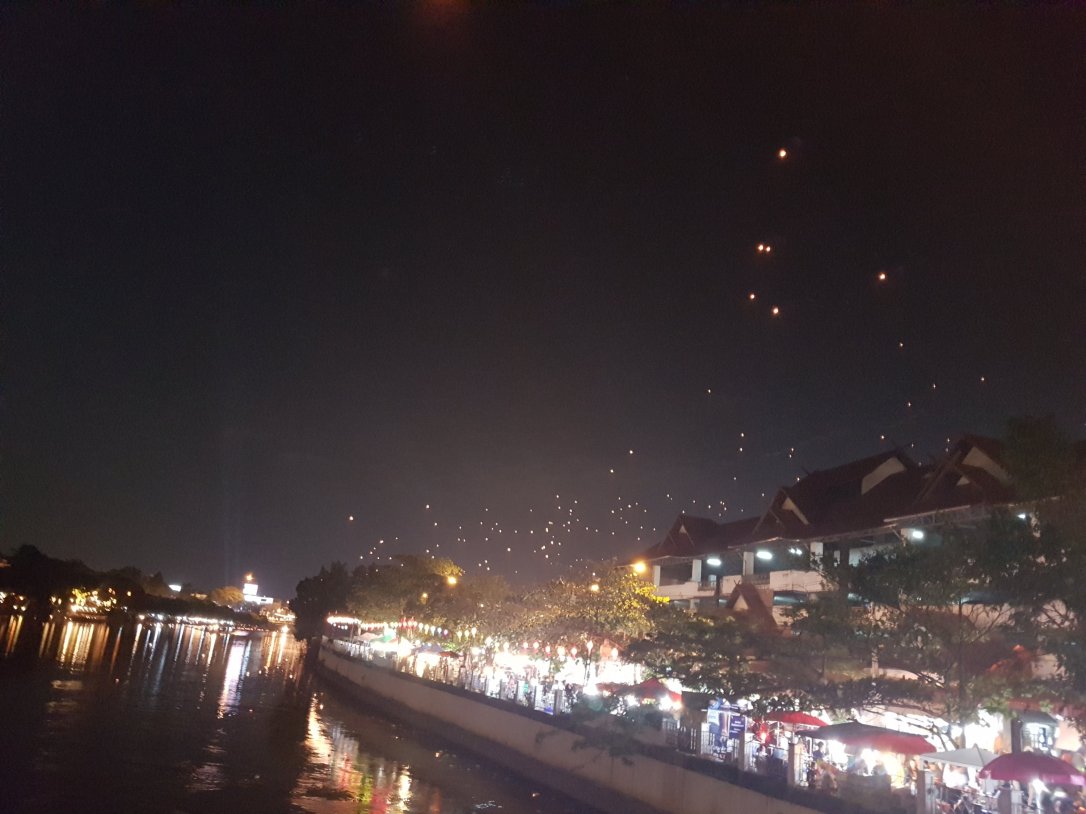 Time to start! Slowly everyone started lighting their lanterns. We were just about to send ours off the bridge but a nearby group of people were stopped by the police because I guess you weren’t allowed to send them off the bridge. We had to go down to the shore. A couple had gotten trapped in the string of lights across the bridge. 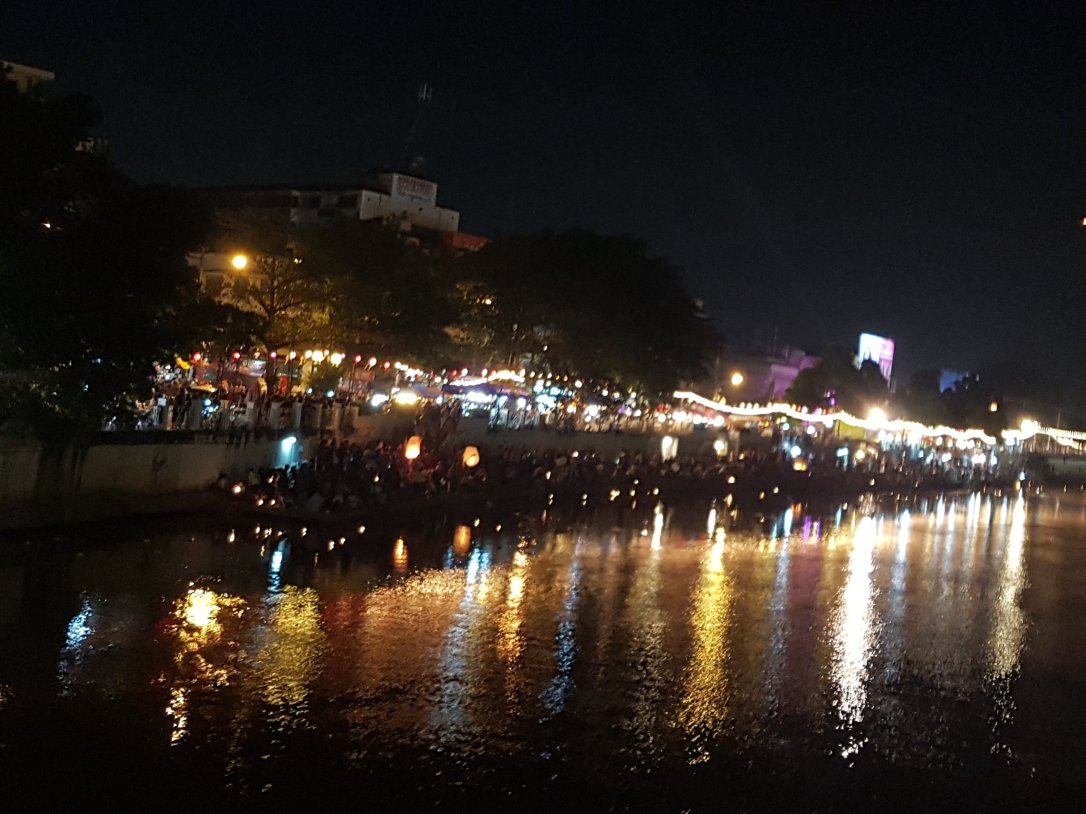 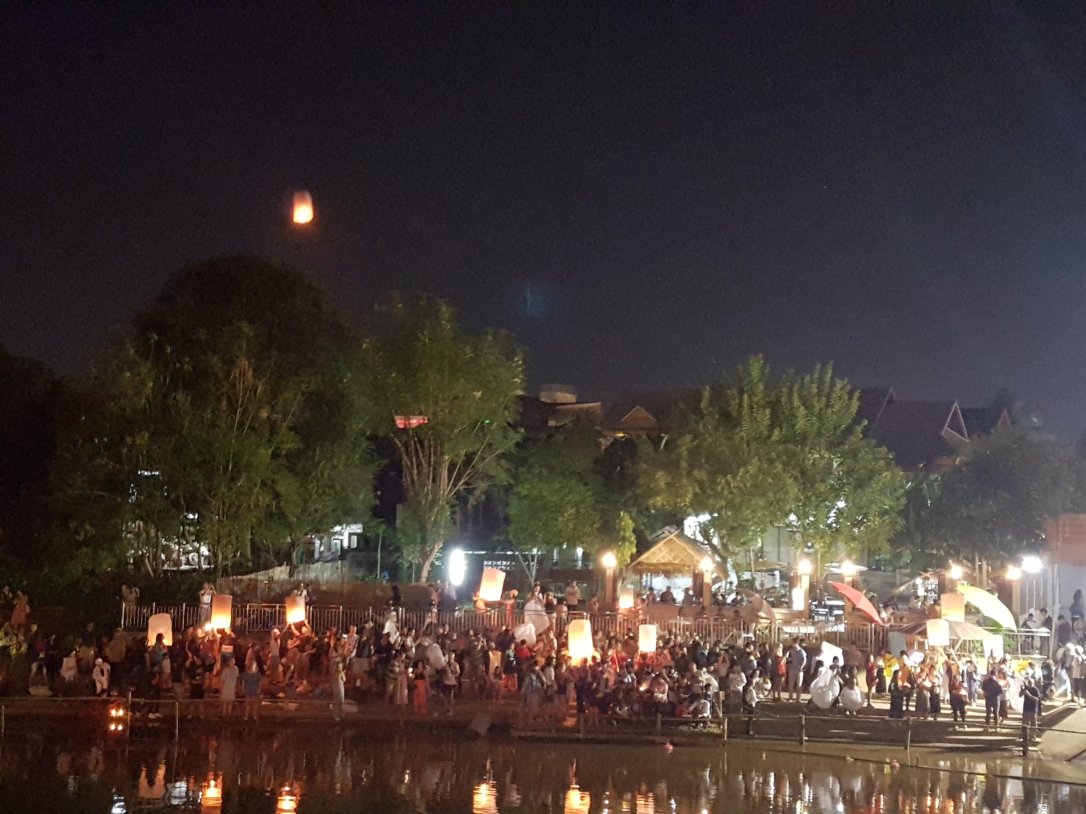 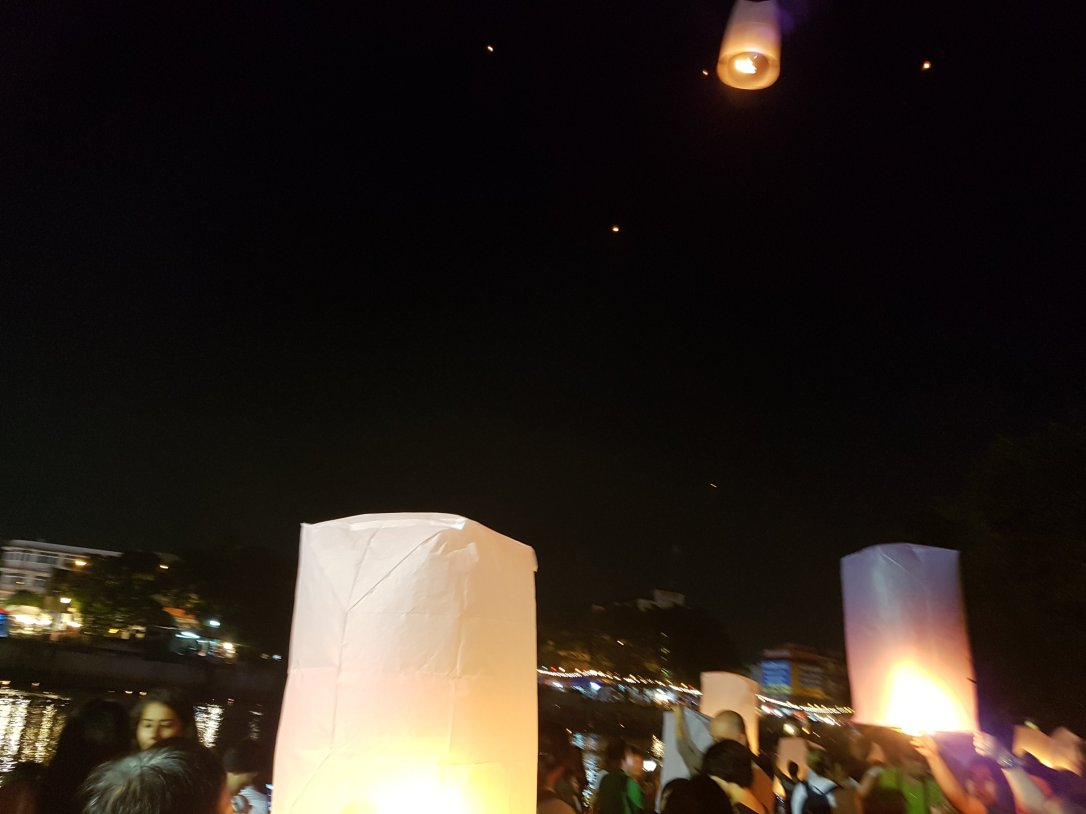 Okay!! Dad was up first with his lantern. We lit it and he let it go too soon so it started coming back down. He had to run and catch it but he saved it from burning the crowd and once it was ready up it went!!!

Okay my turn!! It’s so scary because I don’t want it to fall in the water. You have to wait for the perfect moment to let it go. 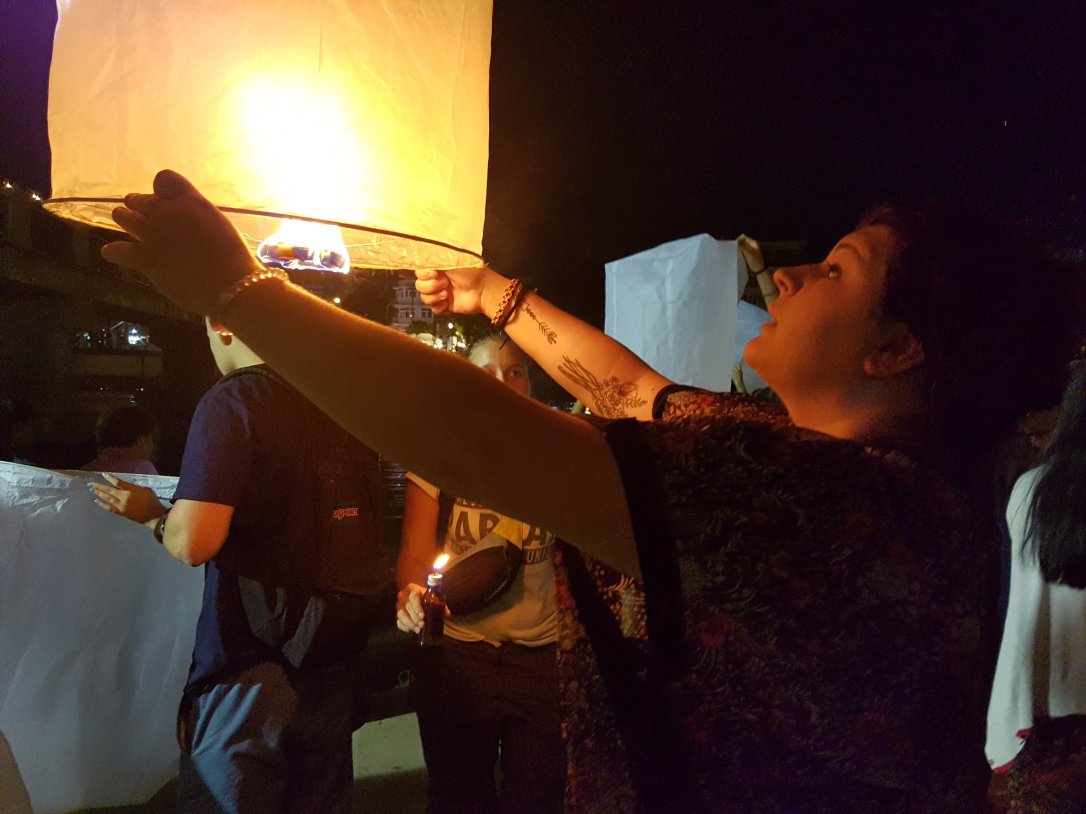 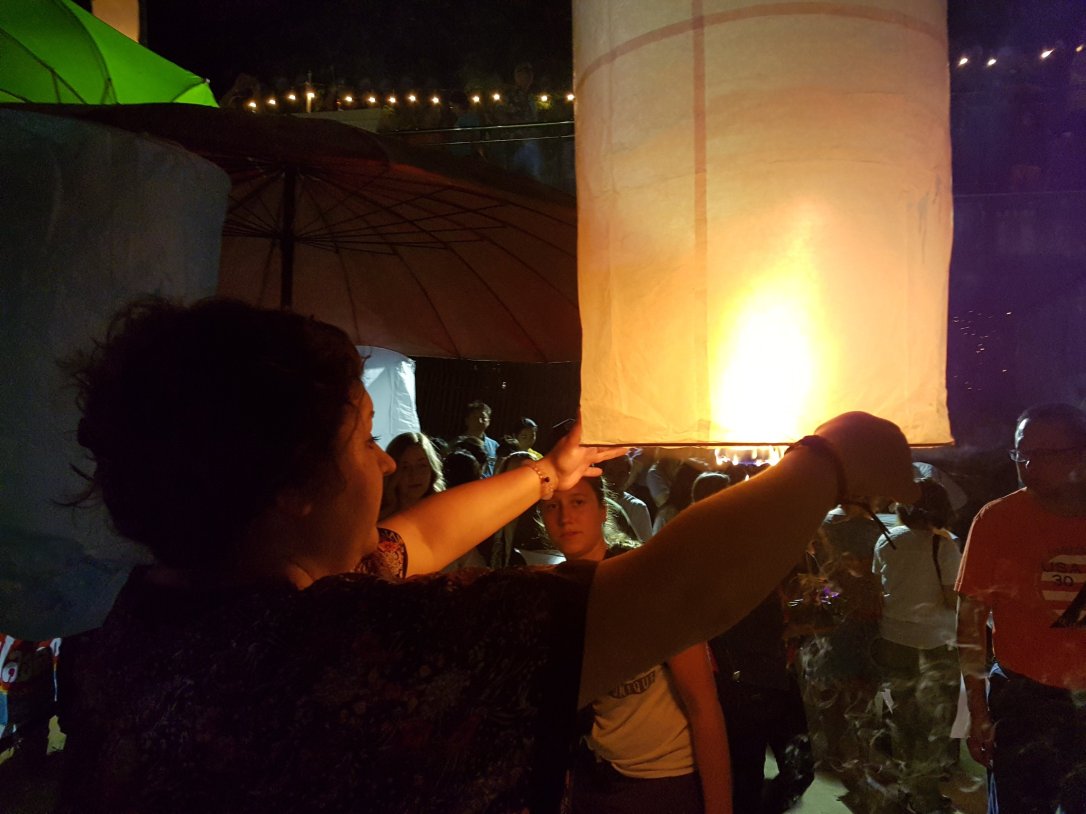 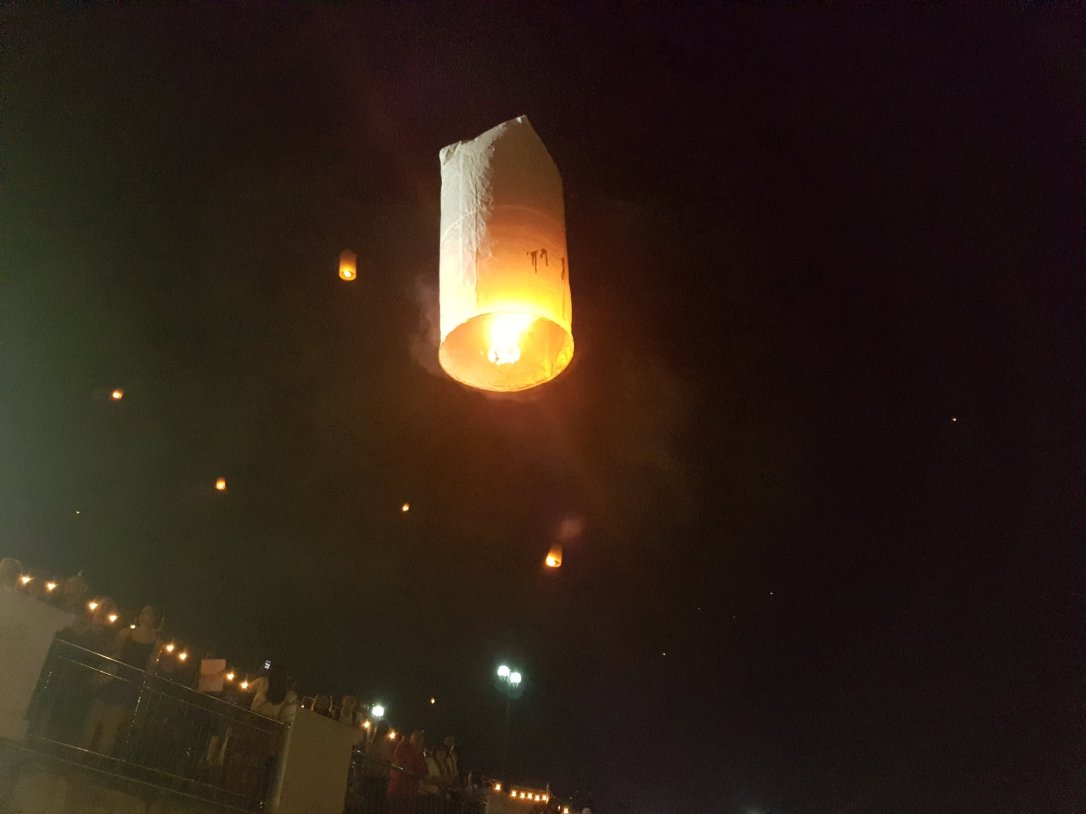 It was honestly the coolest thing ever. We hugged and were smiling ear to ear! It was so fun watching other people set theirs off too. Everyone is just so happy and it was fantastic. We walked back up to the bridge to watch the sky. 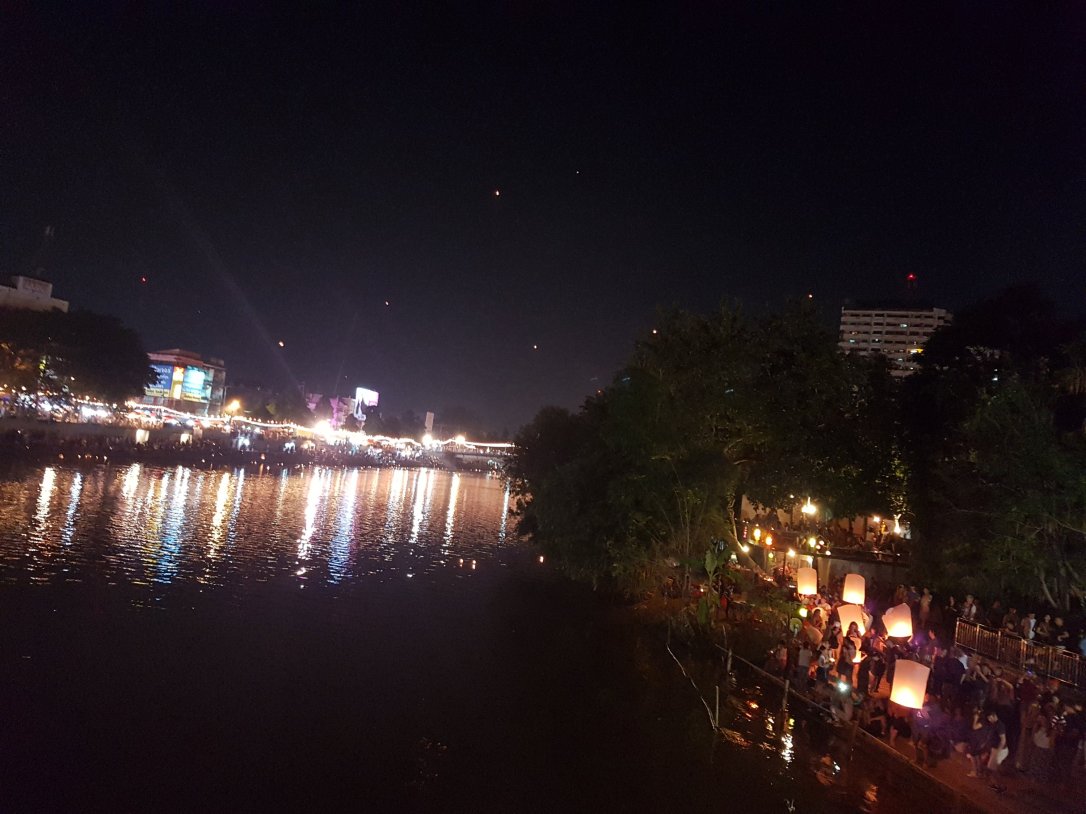 What a blast!!! Now for the hard part. To get out of here. The bridge was now packed and there was only on set of stairs to go up and down. The line was the worst we have ever been in. People were pushing and the line didn’t even move. It probably took a good half hour to get out of there. Once we were down on the ground, it wad also chaos. People were sending lanterns up from the middle of the road while motorbikes were trying to drive through. 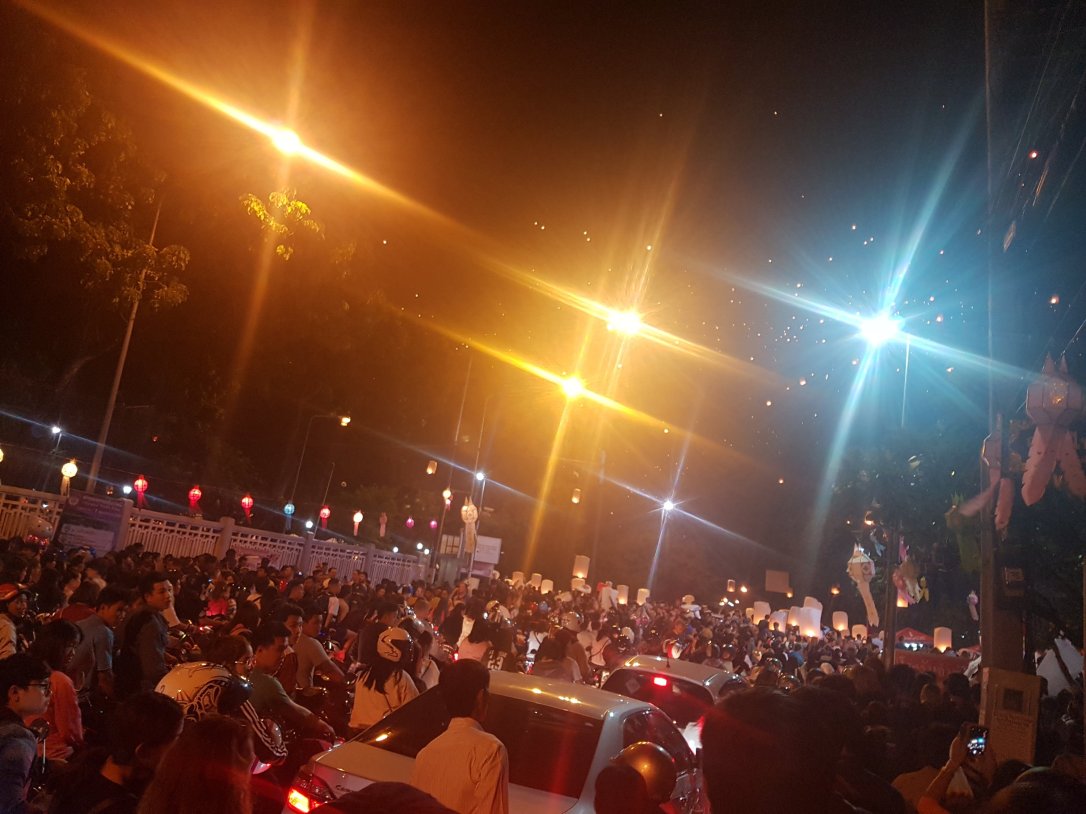 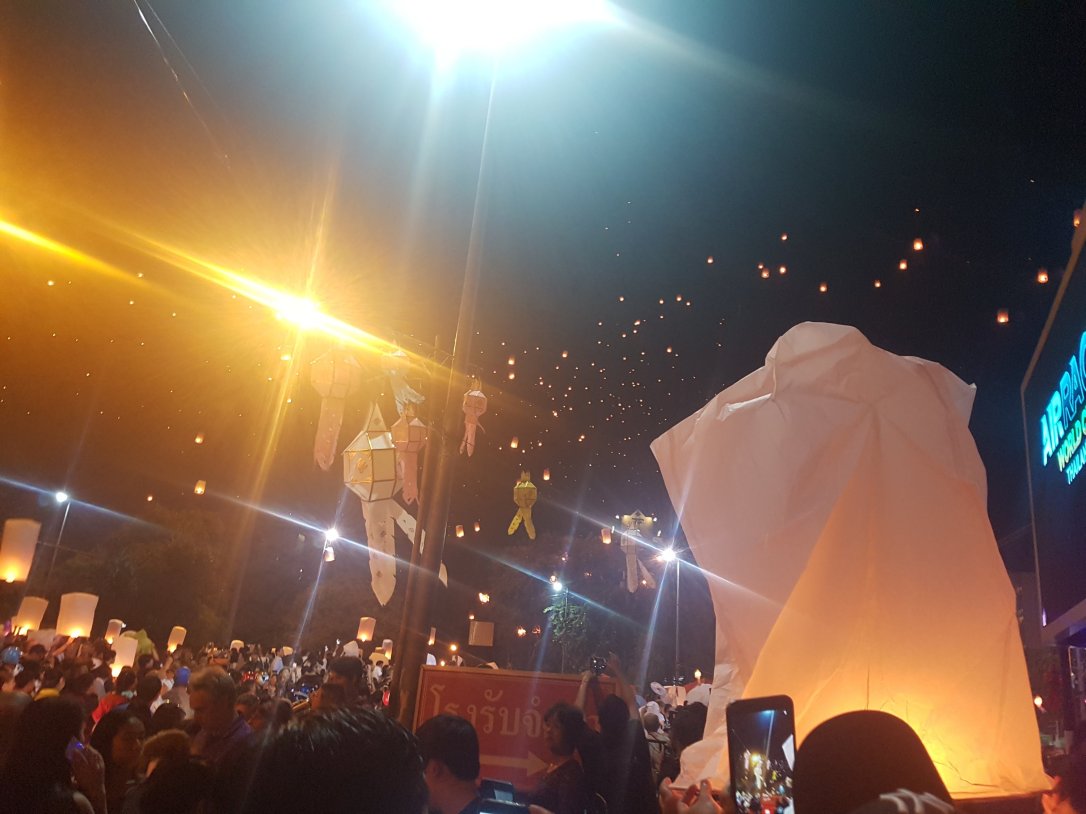 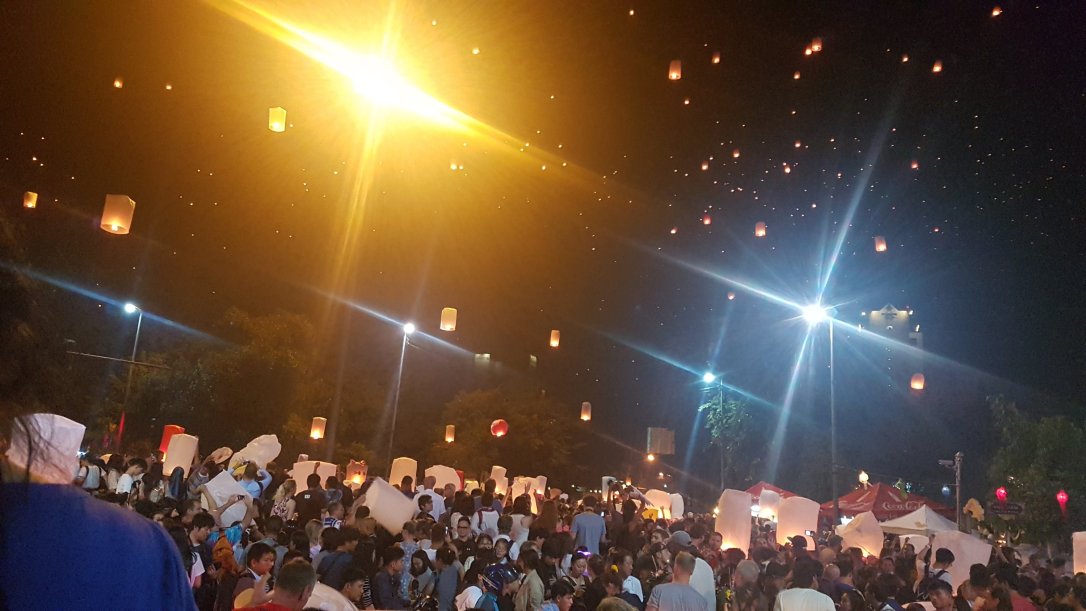 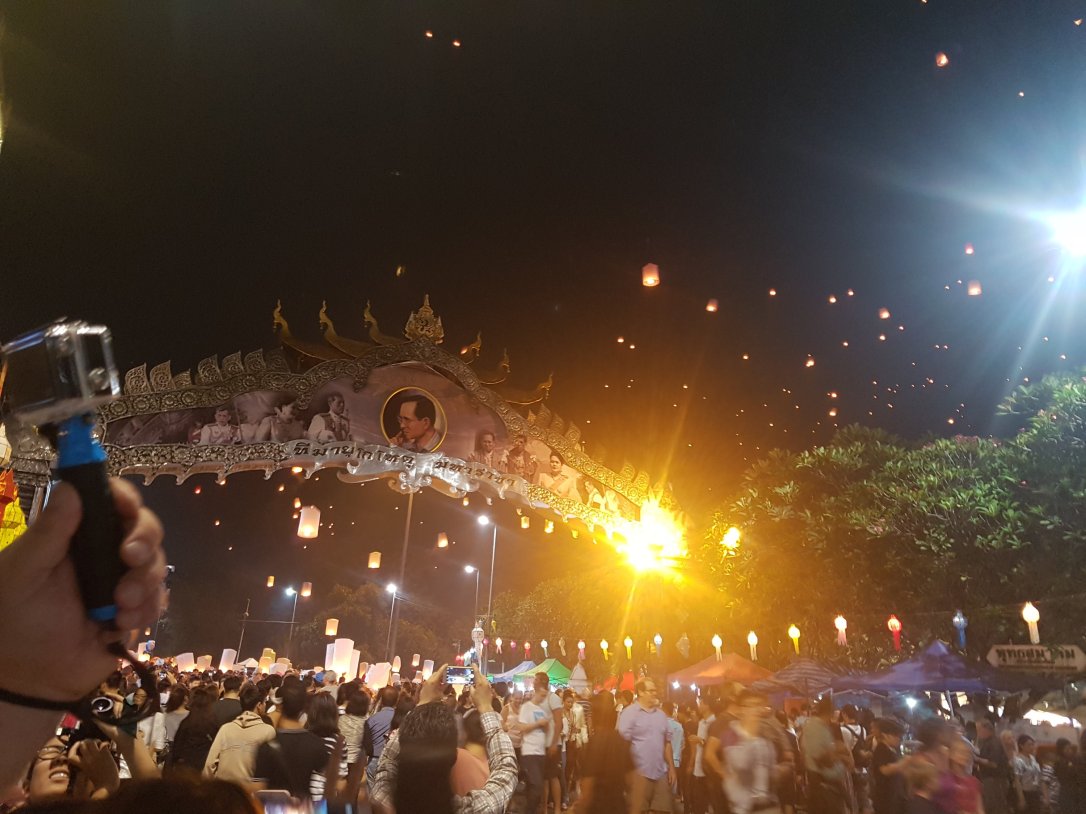 We headed back to the room early and dad ordered room service. We packed up and set our alarms for 3:30am! I don’t know why I booked such an early flight to Phuket but who cares. Off to the beach tomorrow!!!!