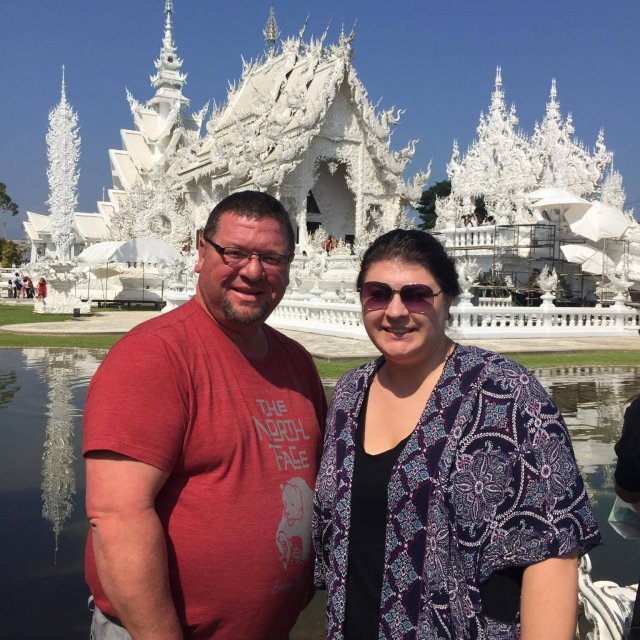 Early start this morning. We booked a day trip to a nearby city called Chiang Rai to see the famous White Temple. We also continue on to the north of Thailand to the Golden Triangle and cross over to Laos. It’s going to be a lot of driving but we will see some cool things! What really sucked, though, was that the second I got in the van I was carsick for the entire day. The roads here are so winding and nuts, it just makes me nauseous. I basically had to nap all day in between stops so that I didn’t get sick.

A long way to go!

So we left around 715am and started off. We drove 1.5 hrs and stopped at a “hot spring” which was just a shop area with a tiny pond that people were putting their feet in. Not the hot springs we are used to in Canada! I bought some pineapple which was shaped cool. We later found out that Chiang Rai province is famous for their pineapple, they are just mini. It was the yummiest and juiciest pineapple I’ve ever had.

We continued on for another hour and a half to the famous White Temple!! It was a very popular place… there were Chinese tourists everywhere. They push and shove and the girls dress like models and have photo shoots by their friends which holds up the lines. I could definitely do without them, but being so close to China it’s part of the territory. I think from here was a 5 hour drive to the Chinese border. Regardless of the crowds, the White Temple was super neat. It is only 20 years old and it is so white and clean. They are constantly building it and taking care of it. It is privately owned by a rich artist originally from Chiang Rai who wanted to make a tourist attraction that would make the city money. The coolest part about it is that it is a Buddhist temple but it’s unique. The inside of the ordination hall contains paintings and pictures of famous people such as Spider-Man and Michael Jackson, it is definitely unlike any other temple! We weren’t allowed to take photos inside but here are pictures of the outside! The whole point is that you start in Hell and walk over the bridge past the two guardians and walk up into Heaven.

One of the guardians

The details are incredible

In one of the pagodas there was a wishing well so we each threw a loonie into the well! 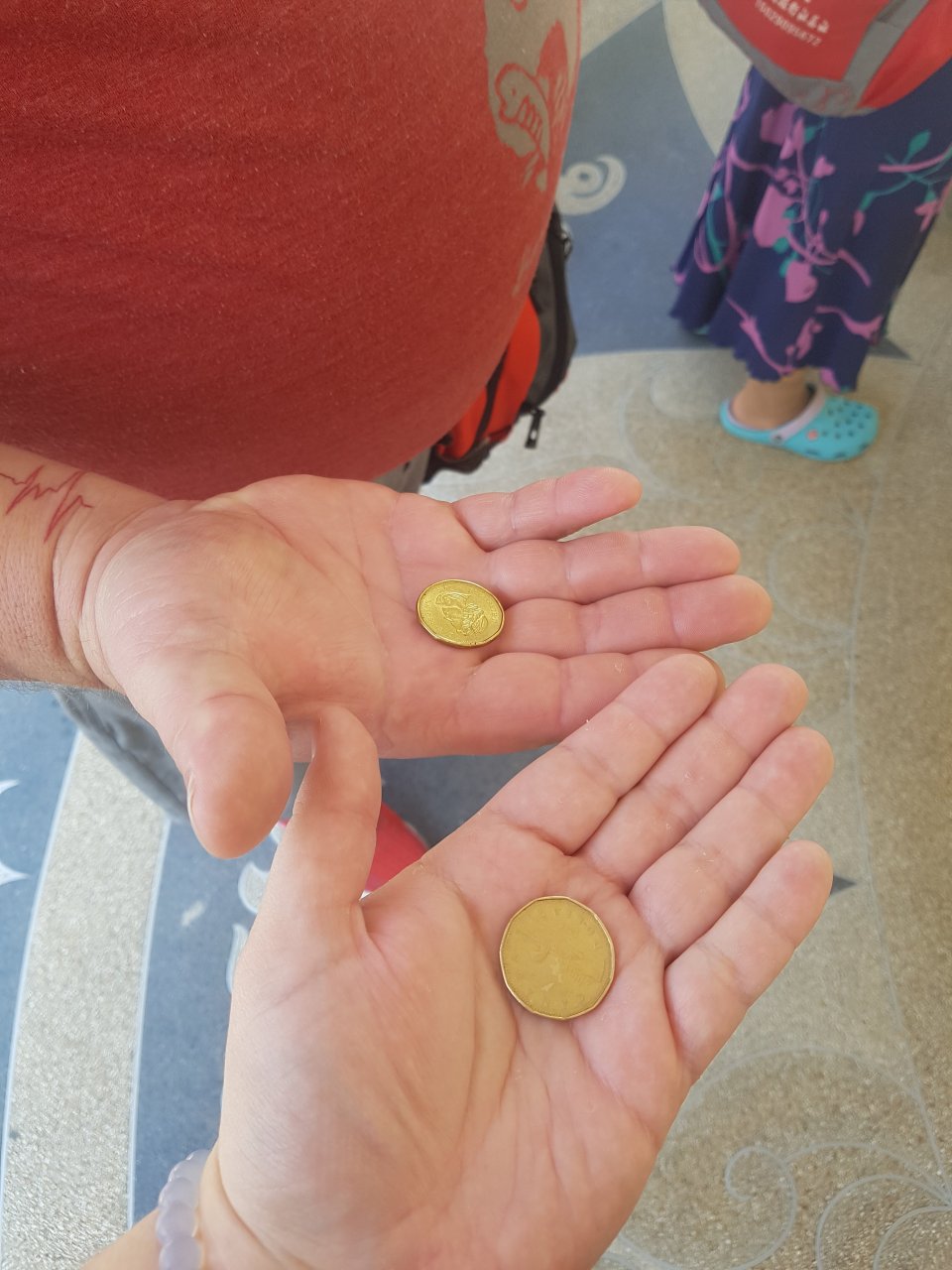 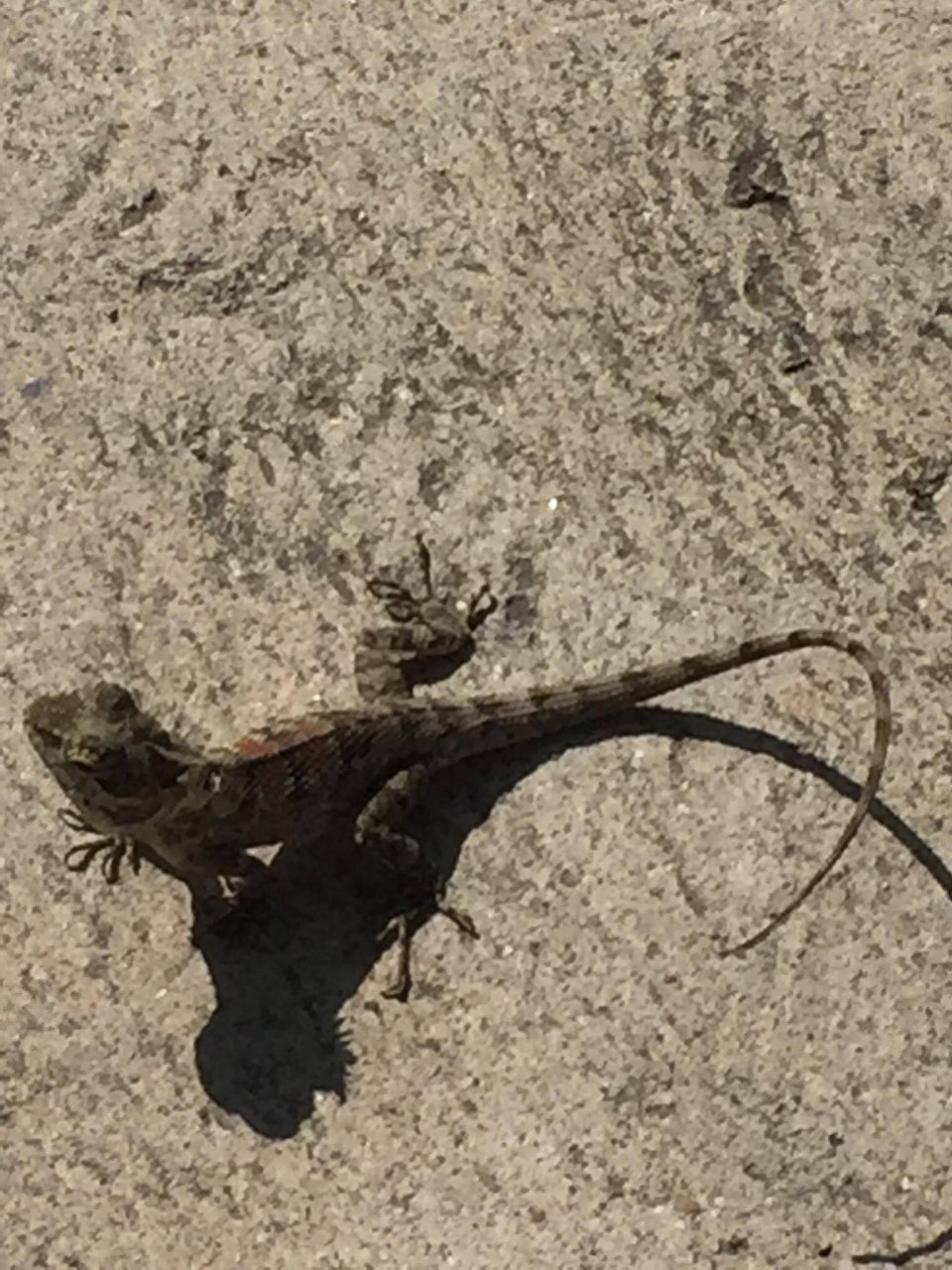 There was also these leaves that they sold for 30 baht that hang on the roof of the temple. It is the same thing as the little bells at Doi Suthep. You write on it, hang it and it is for good luck. I’m a sucker for this kind of thing so I bought two, one to hang and one for a souvenir. 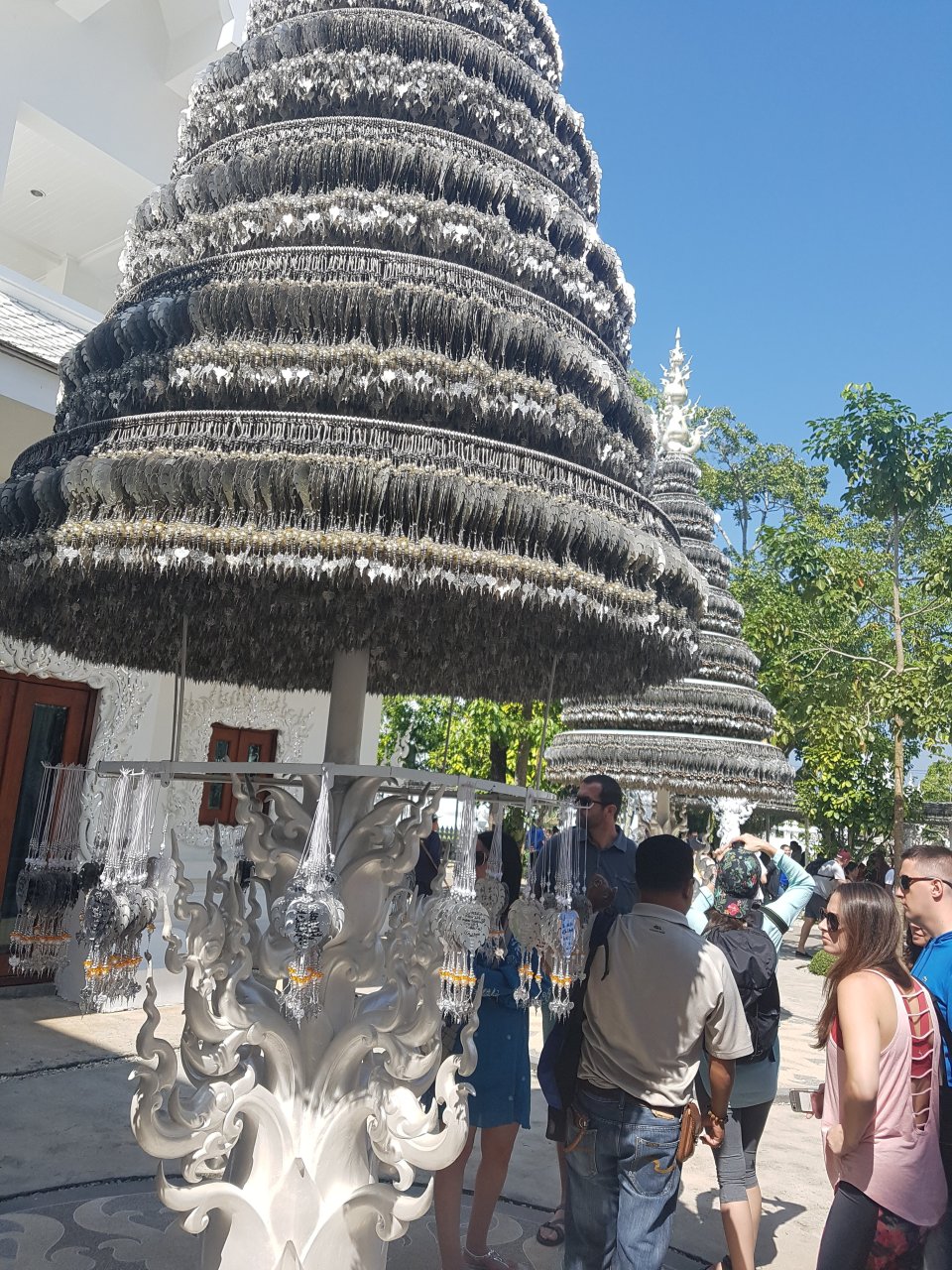 We liked the White Temple!

We quickly grabbed some fried rice and chicken satay!

So after our snack, we drove another hour to Wat Chedi Luang, a thousand year old temple that was the complete opposite of the last one… It was so quiet! We were the only ones here. 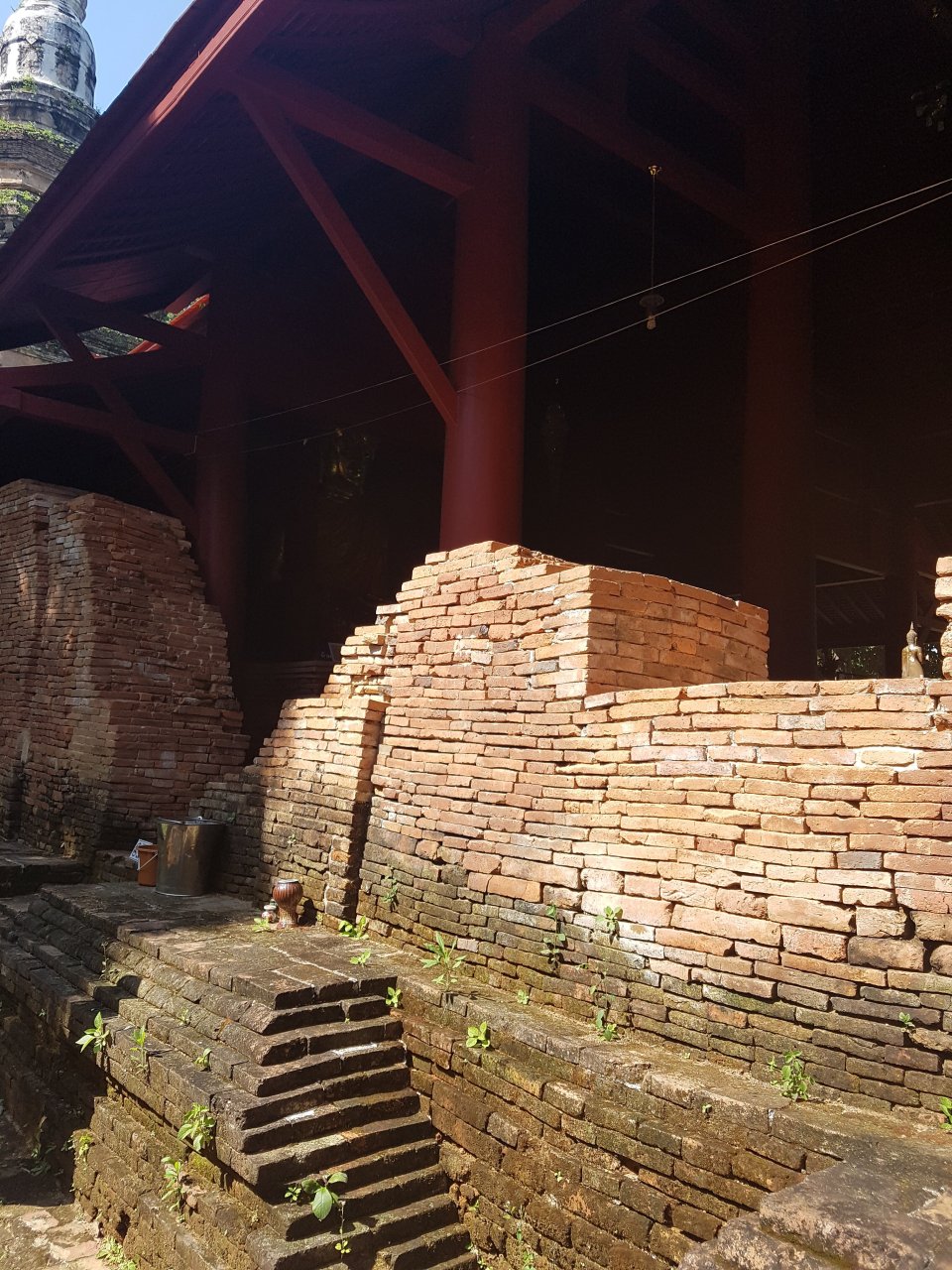 This place is so old 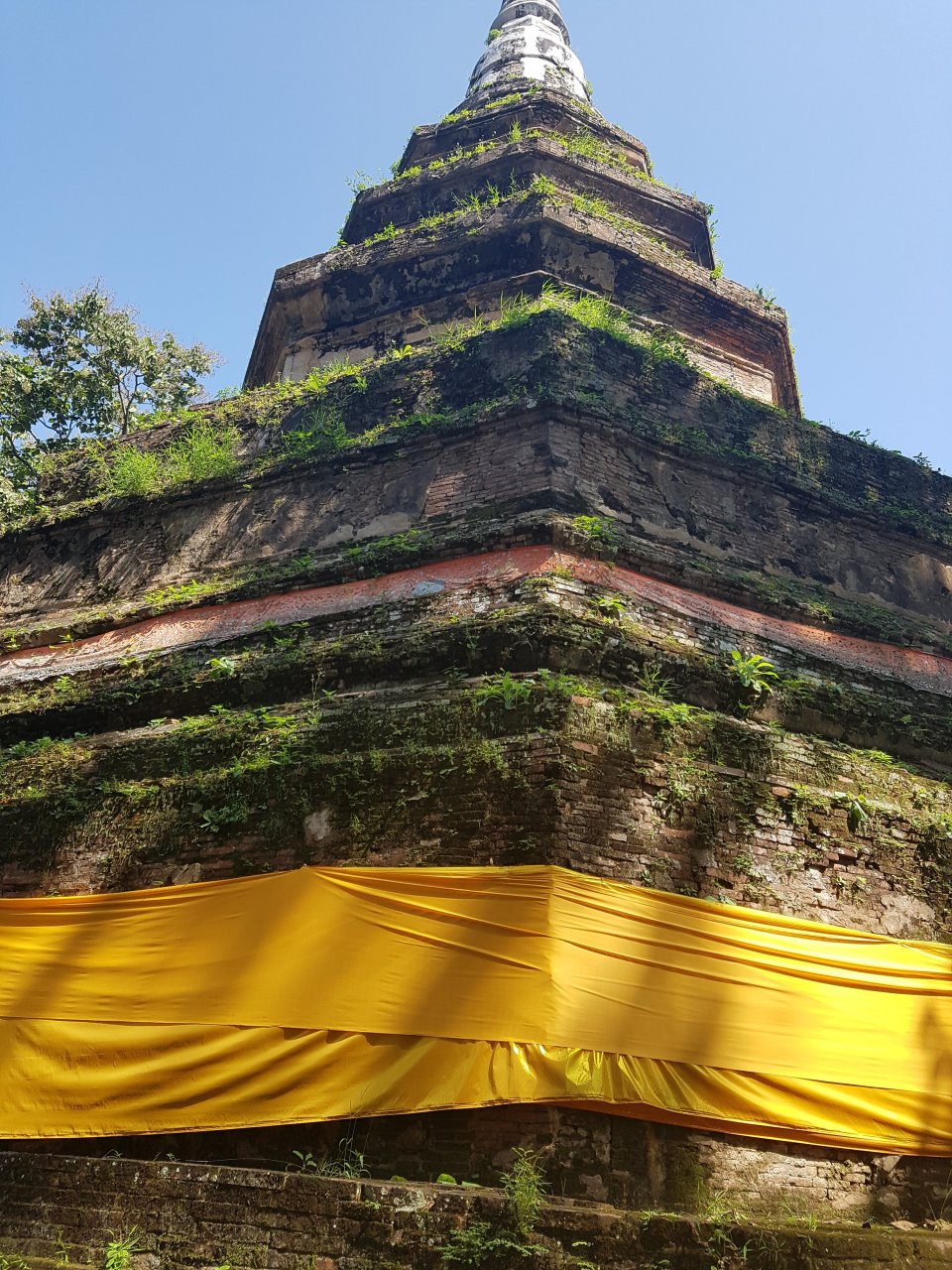 Next we went for lunch which was delicious!

We then headed to the Opium Museum. So this area of the world is called the Golden Triangle. The Mekong River (The biggest and longest river in Southeast Asia) runs through here and 3 countries meet at one point, Thailand, Laos and Myanmar. Back in the day opium was a huge product in this area as the one species of poppy that produces opium grew up in the mountains. They treated it like gold, hence the name Golden Triangle. 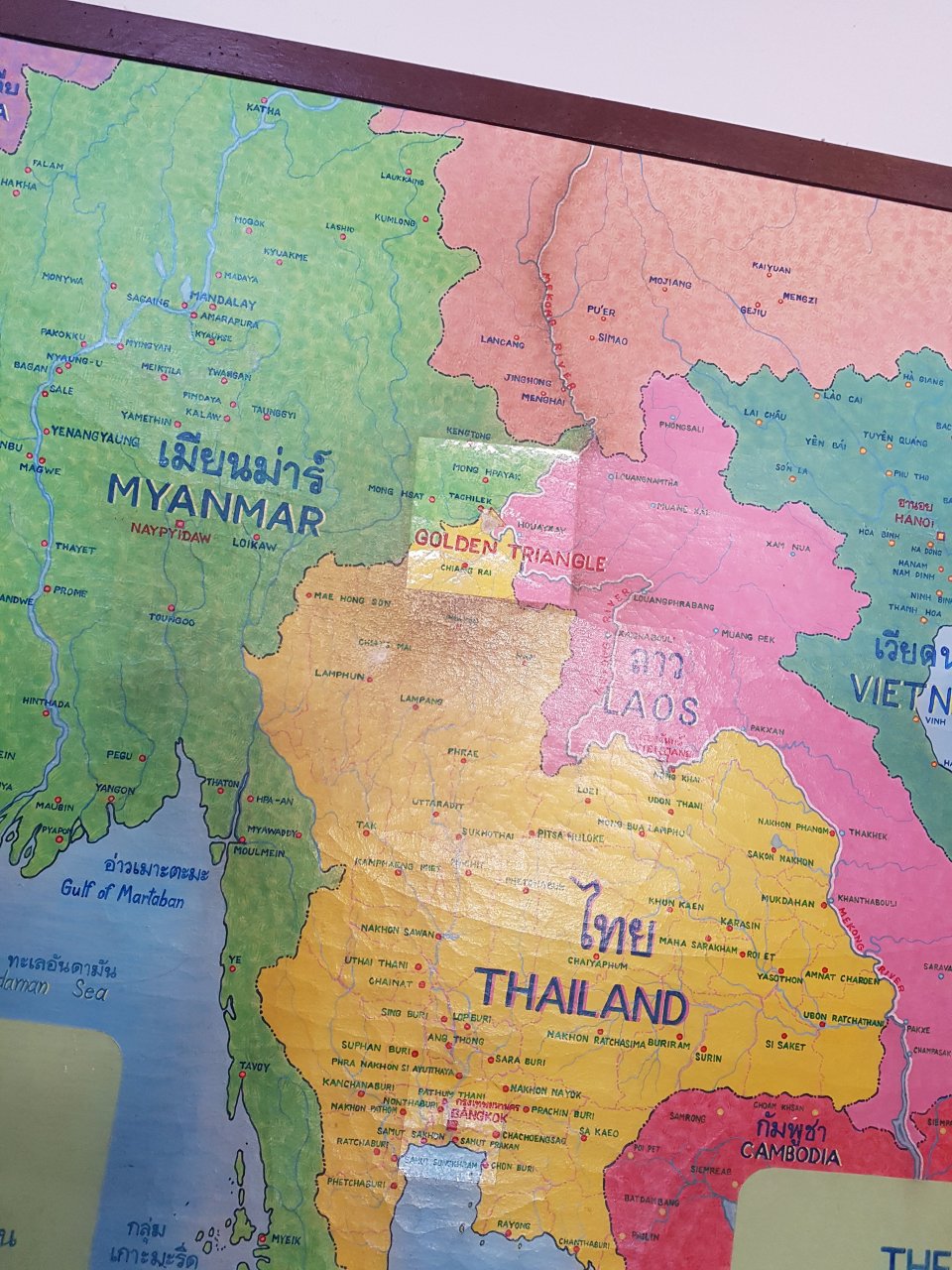 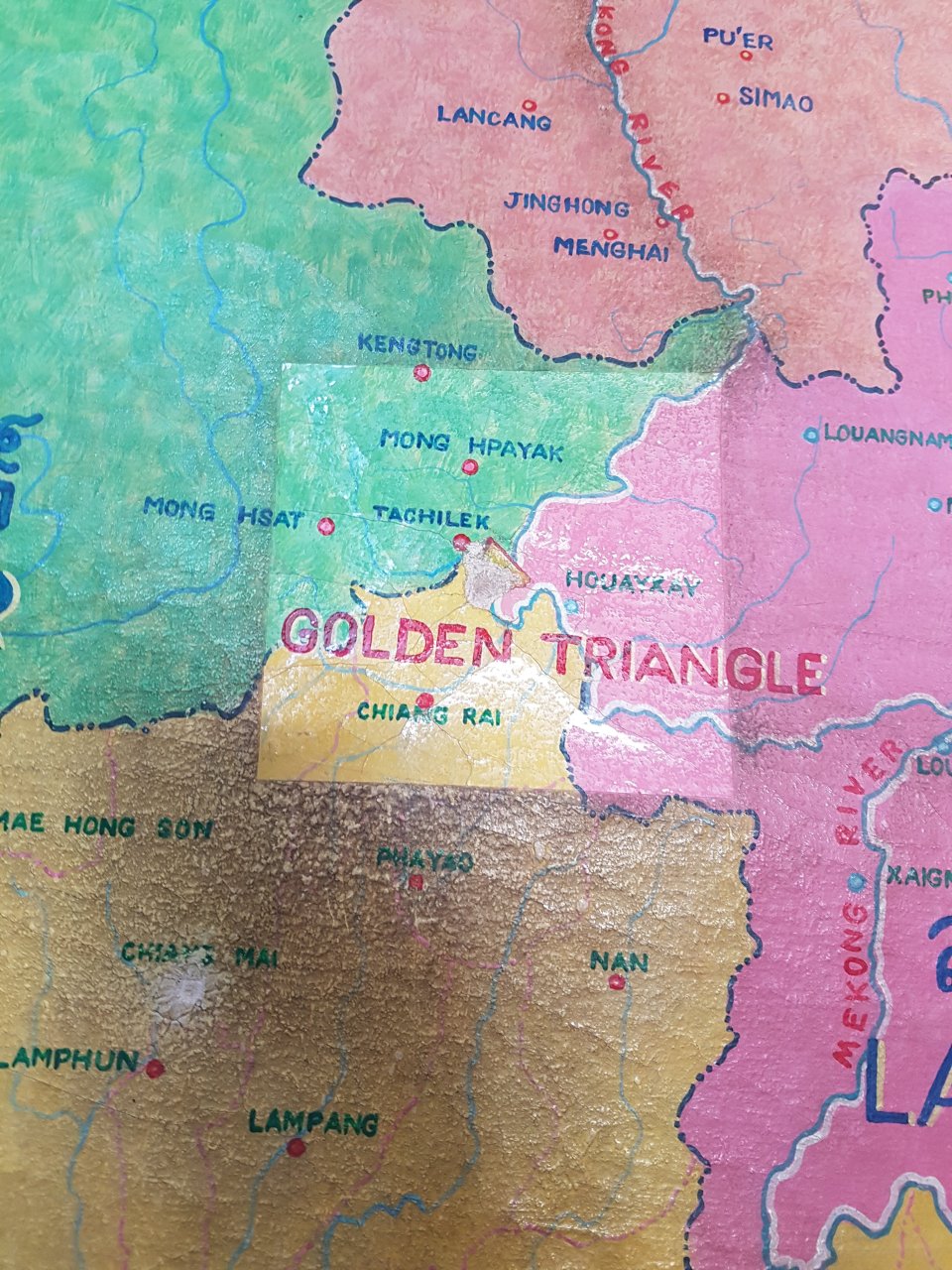 We didn’t take any pictures inside the museum, it was cool to learn about the opium but for some reason we didn’t find anything to capture in photos. Next we took a longtail boat ride across the Mekong River to Laos! The Laos side has an island that is owned by the Chinese and they are building a huge casino here. Looking back on the Thai side, a huge Buddha is seen from the river. 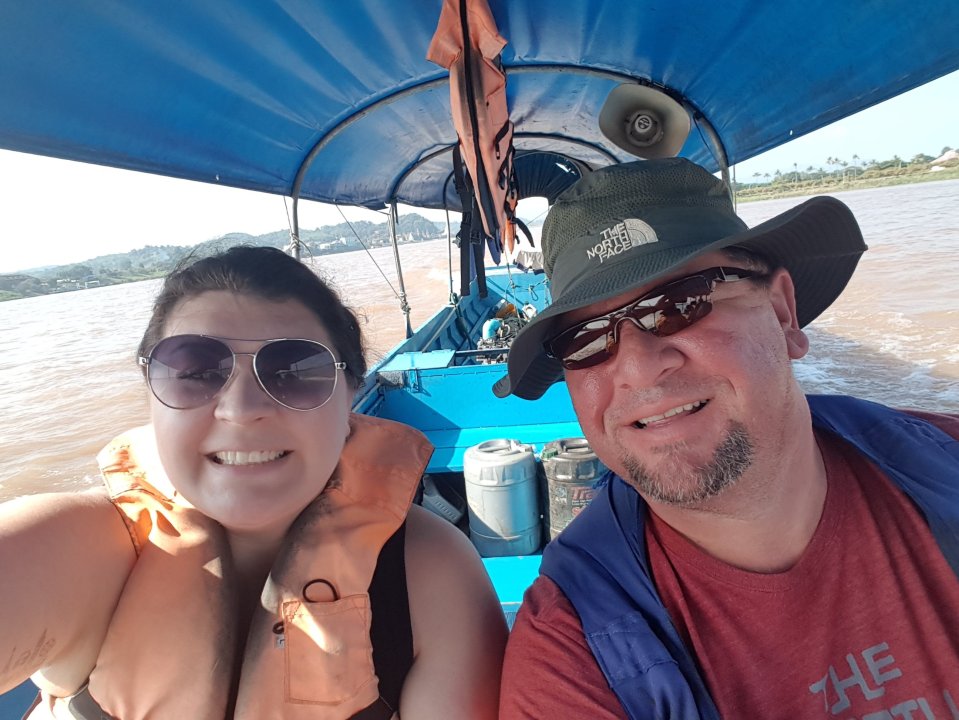 Loving the breeze from the Mekong!

Our selfie in Laos!

We were in Laos for a grand total of 20 minutes!! Technically it’s one more country we can cross off our lists though. There wasn’t much to see here, they just brought us to this big shopping center. When we got there, Dad had a free shot of “Snake Whiskey”. It’s whiskey in a huge jar with a dead rattlesnake and scorpion inside….. I don’t know why he is so adventurous with food this trip!! He ended up buying a bottle of it for his bar and we headed back to Thailand! I wish I got a picture of him drinking it but I was videoing on the go pro instead. 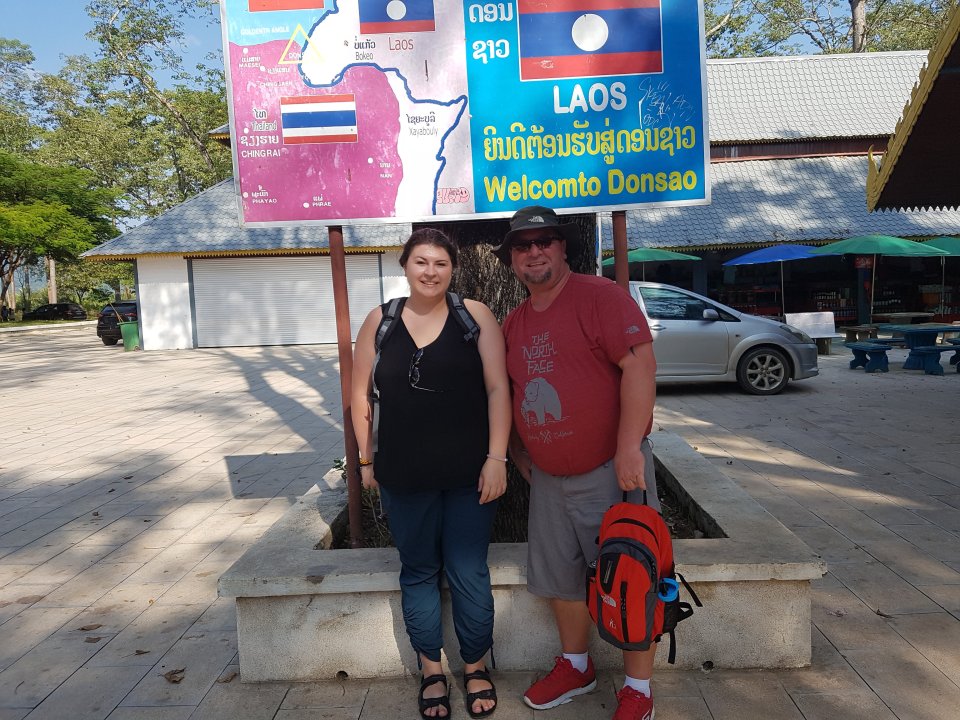 Proof we were In Laos 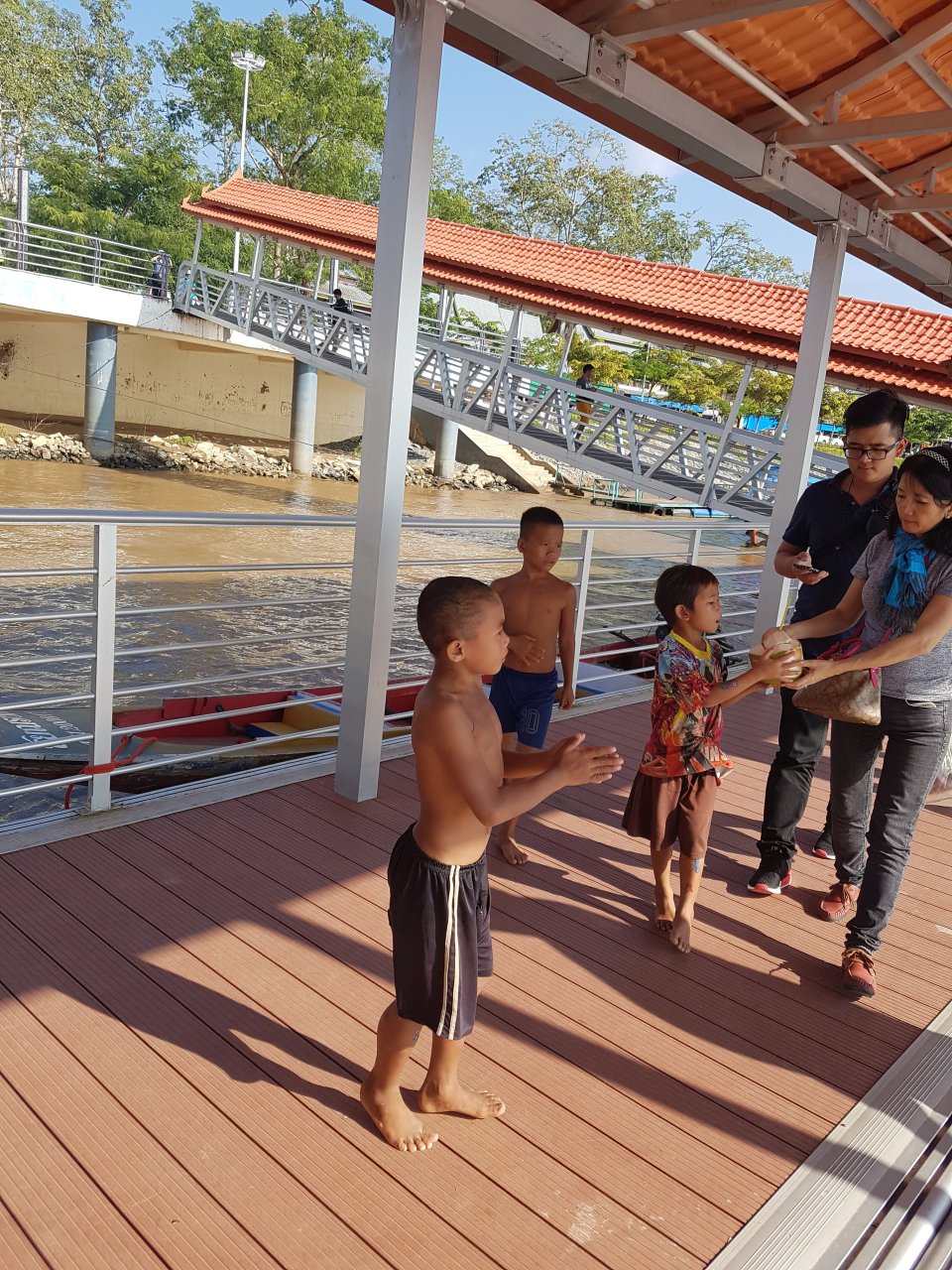 This is the Triangle..on the left is Thailand where the Buddha is. To the right is Laos. And right in the middle with the mountains is Myanmar

We got back to the van and started the 4 hour drive back to Chiang Mai. We stopped at a Chinese temple to take pictures of this giant Buddha.

We stopped at the 2 hour mark and got some tea, coffee and snacks. This is what the bathroom was like..no toilet paper… I still don’t even know what to do with these toilets. At least it was clean.

Then we finished the other 2 hours home where I finally got to take some Advil and Gravol!! It was a long day! 14 hours all together! For $70 CAD each!

My favourite part of today was both crossing Laos off my list and seeing the White Temple finally… Looking at pictures online doesn’t do it justice. The details in this thing are fantastic. My least favourite part was being sick all day and the huge crowds at the temple.

Dad’s favourite part of today was drinking the snake whiskey (ew) and his least favourite was all of the driving on the windey road.

Time to sleep!!! Tomorrow is the Lantern Festival!

Watch my video from this day here!