Saturday night we ended up going to the brewery in Siem Reap. It was really cute but they didn’t sell growlers so dad was disappointed. Proof in the picture below, Dad is always attracting people in Southeast Asia. Before we came here the tuktuk drivers were all touching his muscles and making a big deal about him. (The guy also thought we were siblings sooooo…….) lol and In Vietnam and Bangkok people would rub his belly and say “Buddha , good luck, Buddha!!”. I just laugh my ass off 😄. Oh and yesterday someone said he looks like John Cena 😁 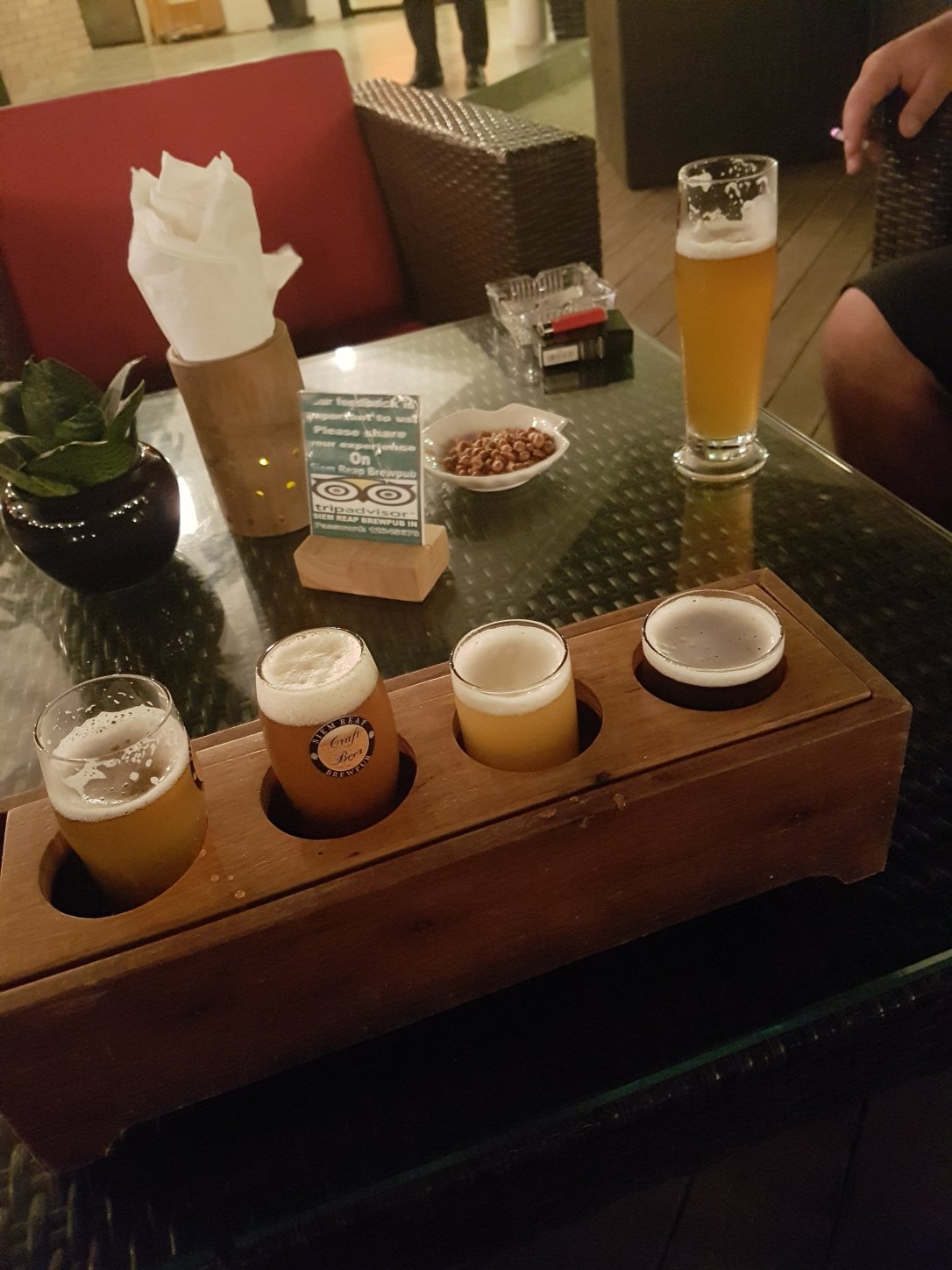 We walked from there to Pub Street and were drenched in sweat. It’s so humid in Cambodia. We sat at a restaurant outside and had a quick little meal while we listened to a bunch of music that was going on everywhere.

We were asleep at 9pm and slept in until 8!!! We felt refreshed but sore from our rock hard beds. We lounged around the hotel and made our plan for Sunday getting to the train station. Our flight time got changed on us to later so we are super nervous we will miss the train but worst case scenario we miss out on our $70 train tickets and buy plane tickets and a hotel room instead. Fingers crossed!

We literally did nothing all morning and it was so great. We repacked our backpacks and ordered more yummy room service. We facetimed our family which was really nice. Then we walked to the store to get snacks for the train. We realised after that we can’t bring our bottles of water on the plane so we chugged them. Can’t hurt to drink 1.5 L of water.

We said goodbye to our wonderful hotel staff and took a tuktuk to the airport.

Our flight wasn’t ready to check into yet so we sat on the ground with a bunch of people and waited.

We waited and waited at our gate and no plane yet. We started to worry it would be late. Then all of a sudden it showed up and we boarded. We sat on the tarmac for a good 20 minutes and I kept checking my watch. We’re going to miss this train! We don’t have a hotel booked for tonight! My anxiety was through the roof. I did some deep breathing and listened to some music and finished a really good book and in an hour we landed back in Bangkok. This was at 6:00pm and we had to be at the train station for 7:00pm for our train leaving at 7:30pm. We still had to go through customs, get our luggage, switch Dad’s SIM cards in his phone, and drive in the traffic to the train station. We ran through the airport…of course our gate was the furthest one from the immigration place. We actually got through customs pretty quick because we beat the rush. While I was still getting my visa, Dad ran down the escalator and our backpacks were waiting there for us! I met him downstairs and off we went to switch the sim card. Once the sim card was in we requested an uber. It took 10 minutes for the guy to come. We could have taken a taxi and not waited that 10 minutes, but they would have taken their time to run the meter. We needed to get there quick! Our uber picked us up at 6:30…half an hour to go. He was really nice, spoke good English and absolutely loved Nickleback. It was the most hilarious thing. Dad told him we were from Canada (like they are) and the driver says “I LOVE HIM”. We heard all Nickleback songs LOL. Also, it was one of his first rides according to uber but he did really well. We hit literally every red light on the way there, of course. We got to the train station at 7:14!! We ran with our heavy backpacks and found our train and got on with a little bit of time to spare. WOO!! And now we are stuck here for 12 hours! Our cabin is private with a lock on the door and air conditioning. It is first class but doesn’t seem like it. It’s not bad, I guess it’s just not what we were expecting. It’s pretty sketchy. 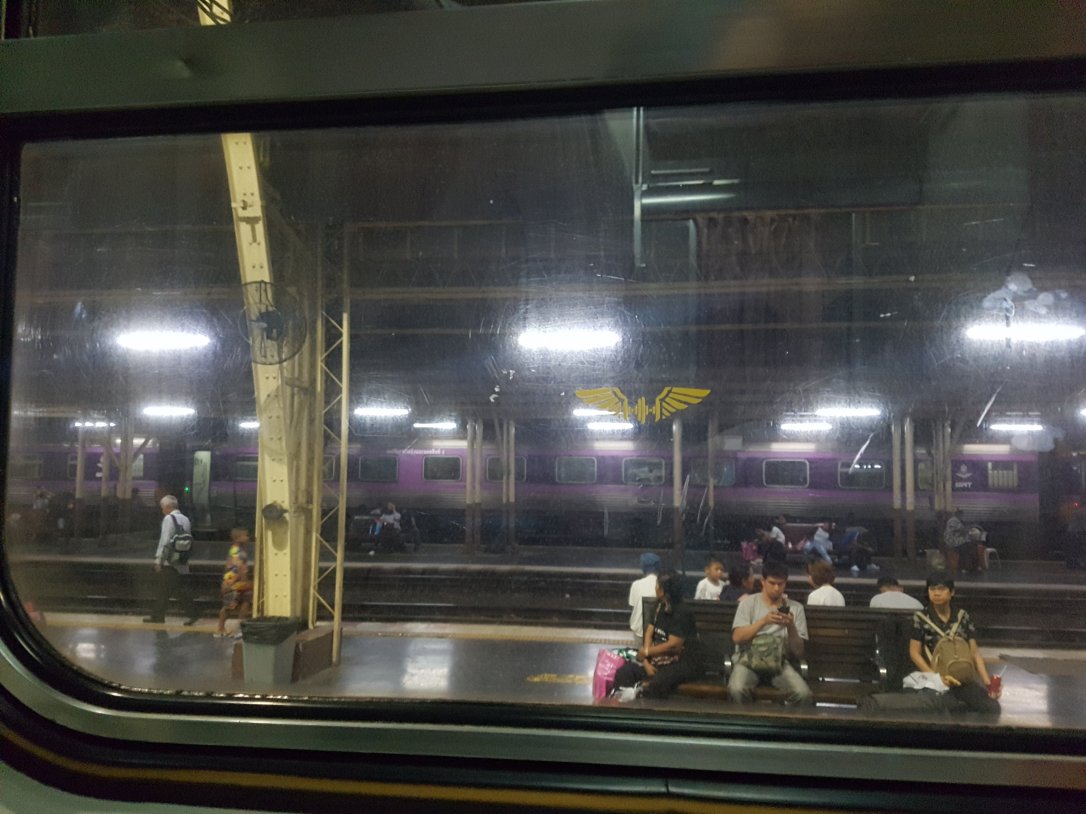 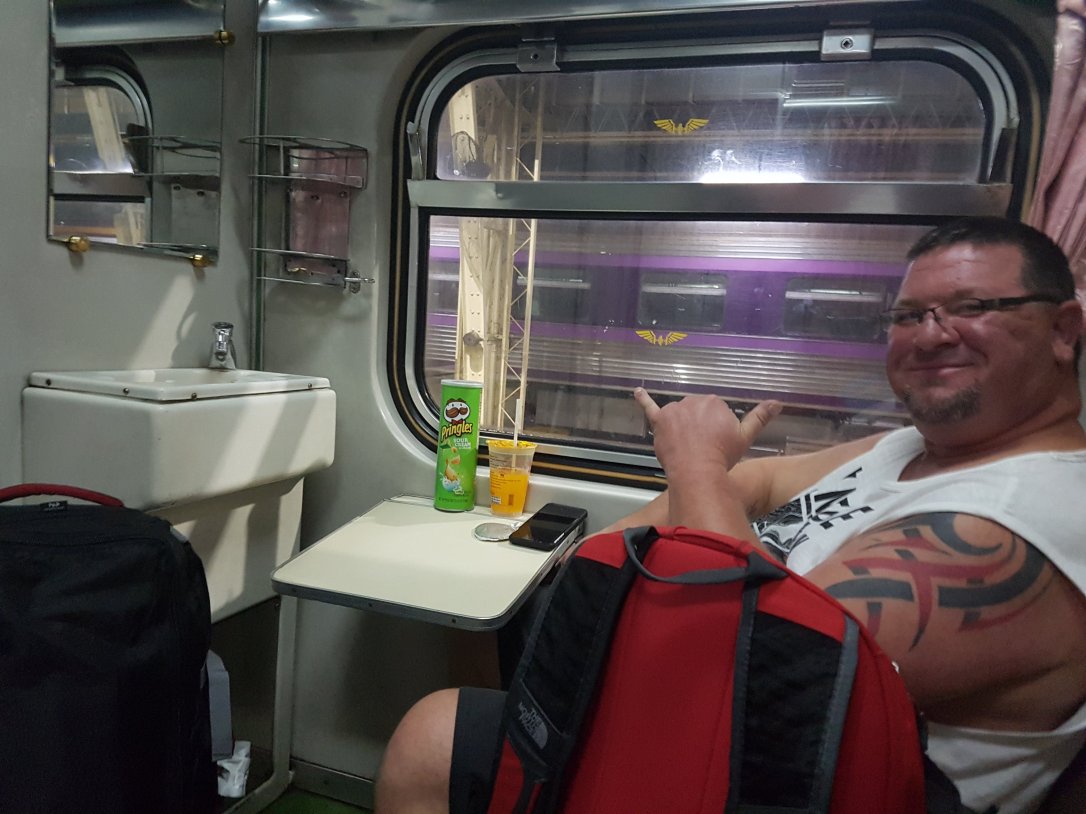 Yeah… where am I supposed to sleep? Right when we were figuring that out someone came to convert our couch into 2 beds. 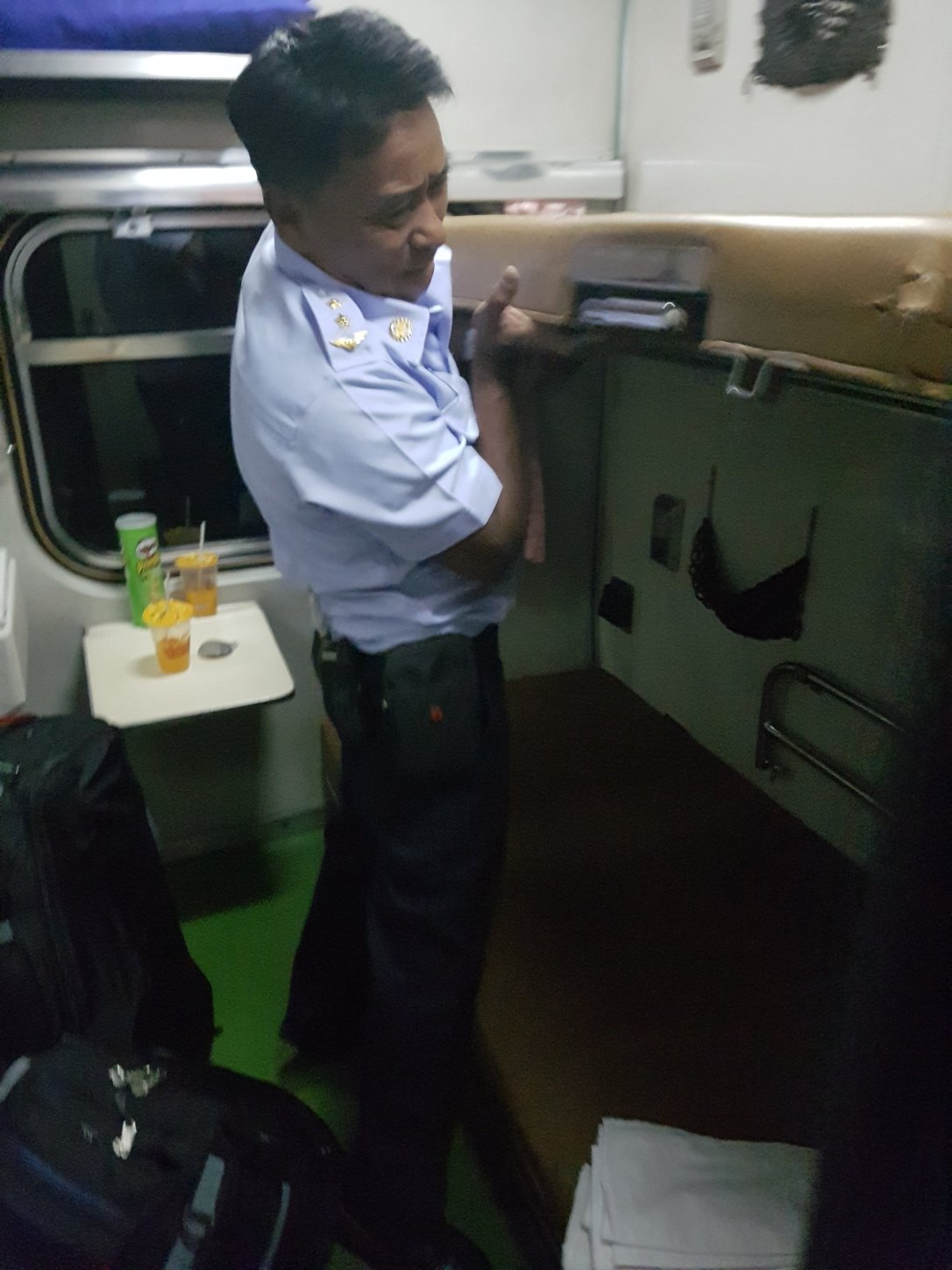 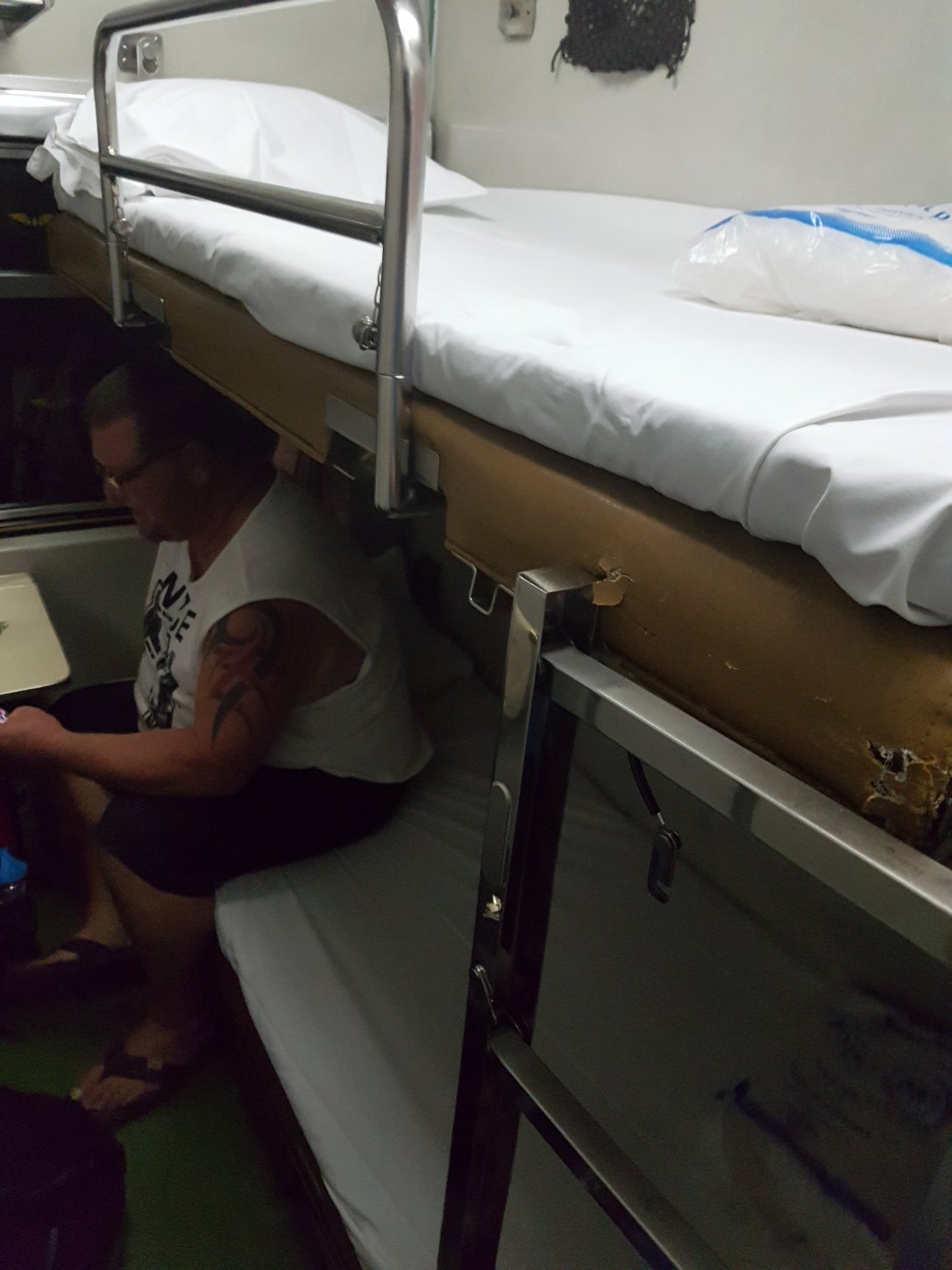 So now I guess we have to go to bed! First dinner. We walked through several cars until we found the dining car. It was pretty cool walking between cars ad they were shifting. We walked through the second class cars and it made us appreciate our private one. There were people everywhere. We didn’t even see third class but I’m pretty sure there are no beds and it’s just normal benches. The one nice thing is that the air conditioning through the train is very good. There was A/C until the dining car where the windows were all open which was loud. Our dinner actually wasn’t too bad. 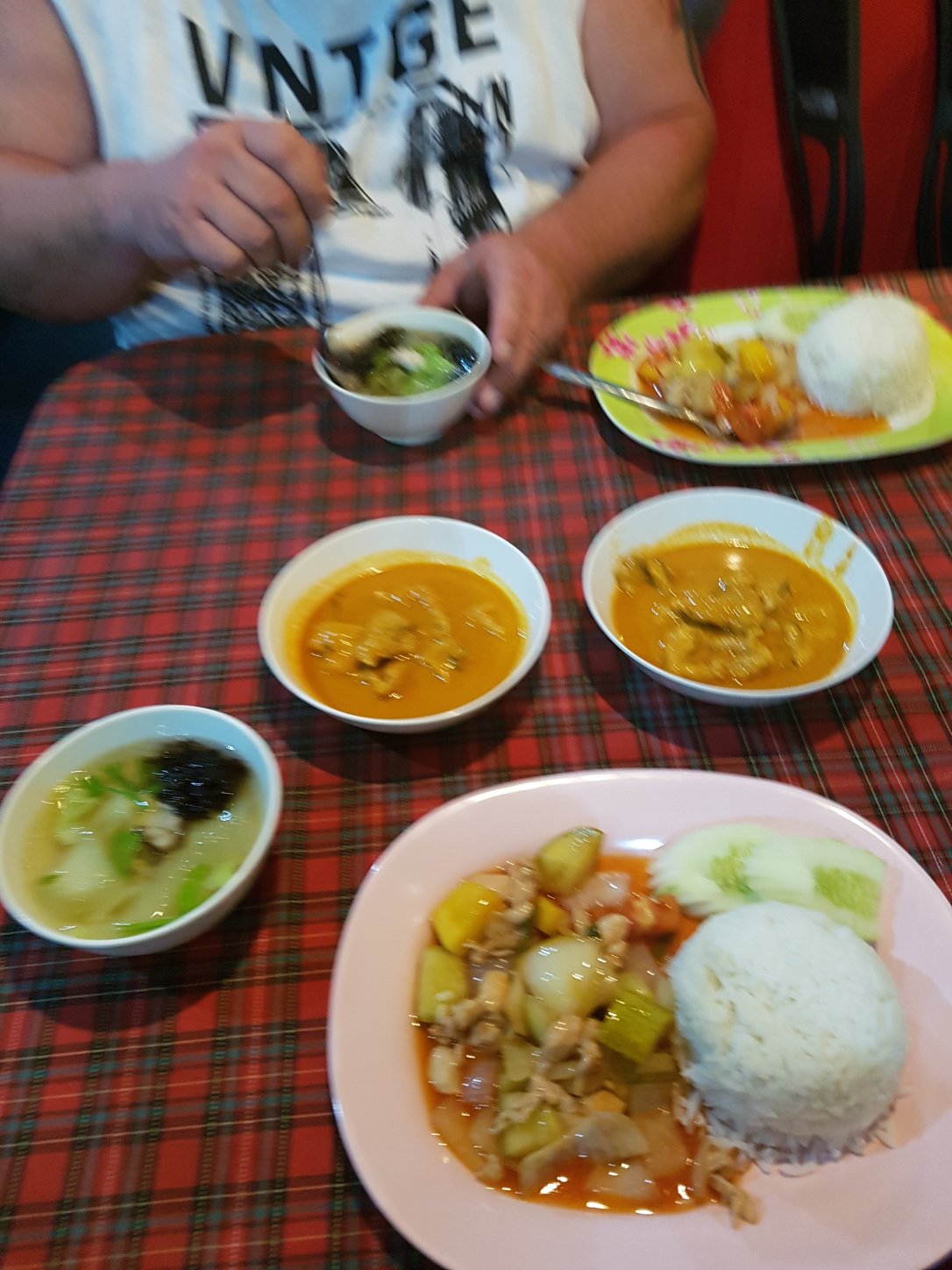 We returned to our cabin to get set up for bed. There’s barely any room to open up my backpack so I am just sleeping in my clothes. Thankfully there is one power outlet in our cabin so dad can plug in his sleep machine. We put our small bags up on the metal racks and got comfy for the next 10+ hours.

Oh, the bathroom is disgusting. I won’t even explain… a picture says everything. Be thankful you can’t smell it. It’s at the back of our car so all the first class passengers use the same one.

We actually fell asleep right away. Staying asleep was the difficult part. The train kept stopping throughout the night and it was quite loud. We had very choppy sleeps but the beds were actually slightly more comfortable than our ones in Cambodia. We woke up at 6 and kept track of our hockey game (Pens vs Jets). We ate some snacks, I watched an episode of Nashville and we enjoyed the change of scenery. We are definitely in the north now! It’s like being in the rainforest and there are mountains! 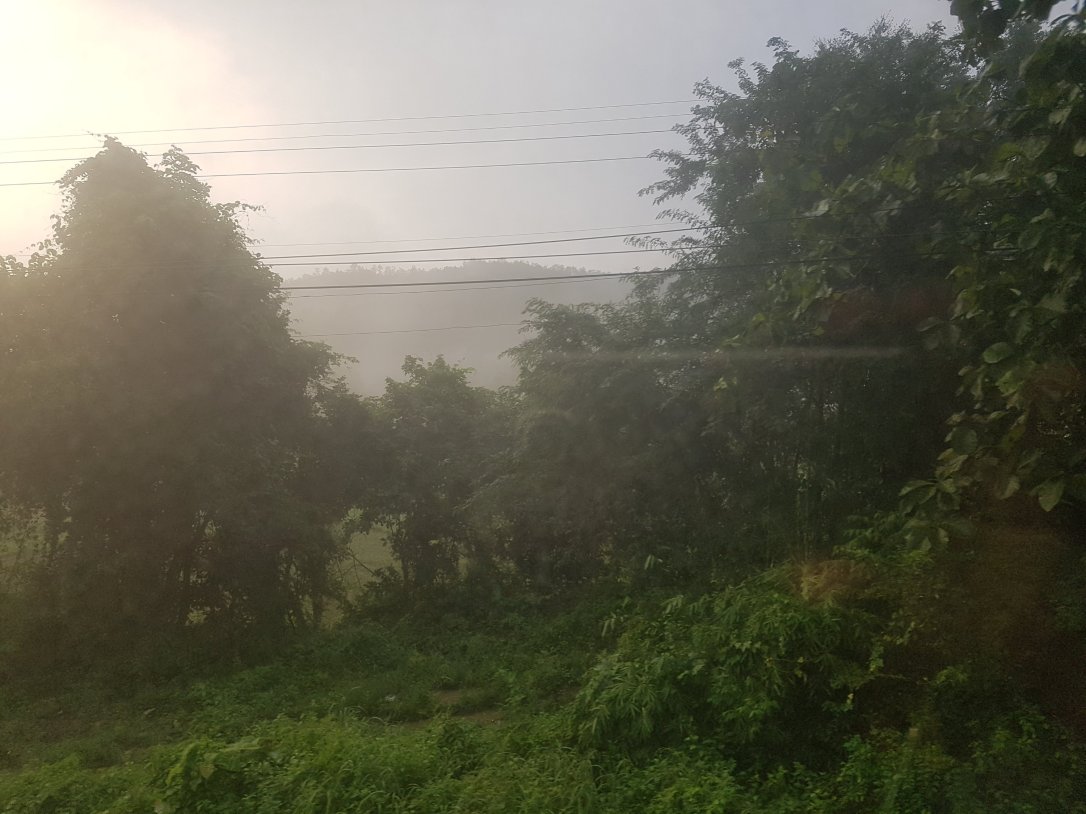 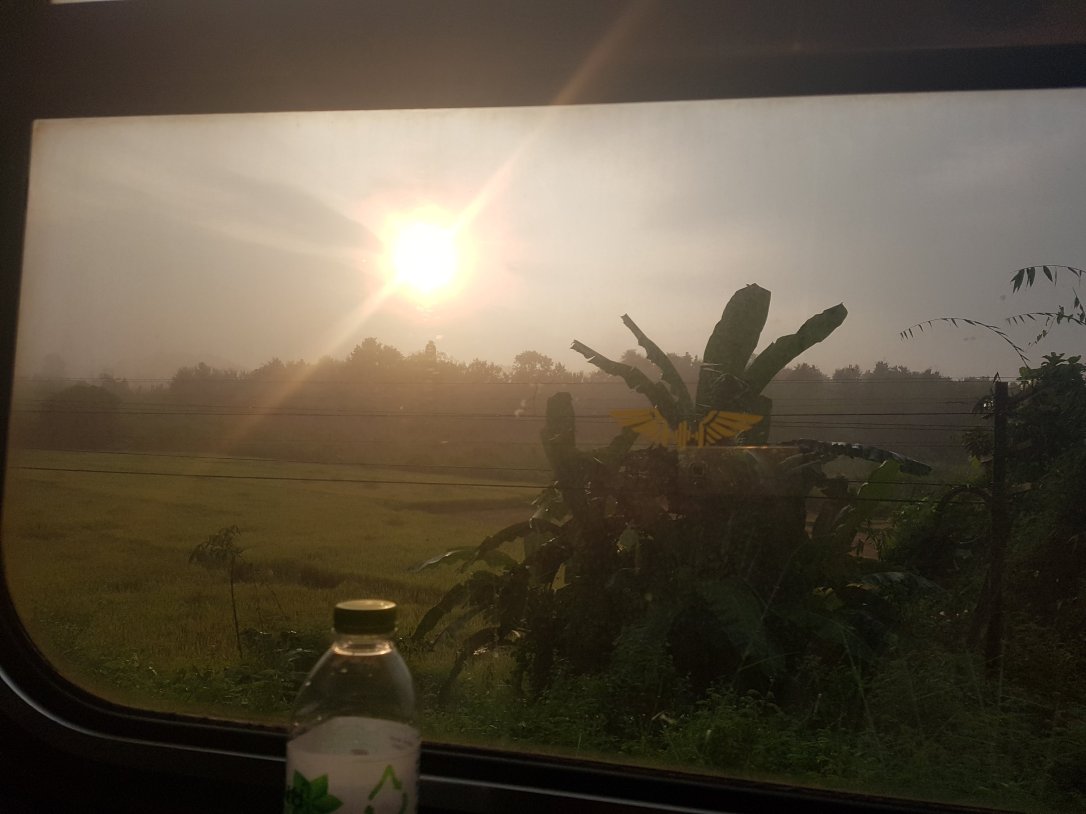 We couldnt wait to get to our hotel and shower! The whole experience was neat and we are glad that we did the train. It would have been the same price to take a 1 hour flight but this is all part of the journey. 🙂

Once we got to Chiang Mai we got to our hotel and thankfully they let us check in early. The hotel is really nice! Which is great because we are here for 5 nights. Our room is huge and has a beautiful view of Doi Suthep mountain. We are going to rest for a bit and then explore the city all day and see some more temples. I can’t wait to eat more Thai food again. 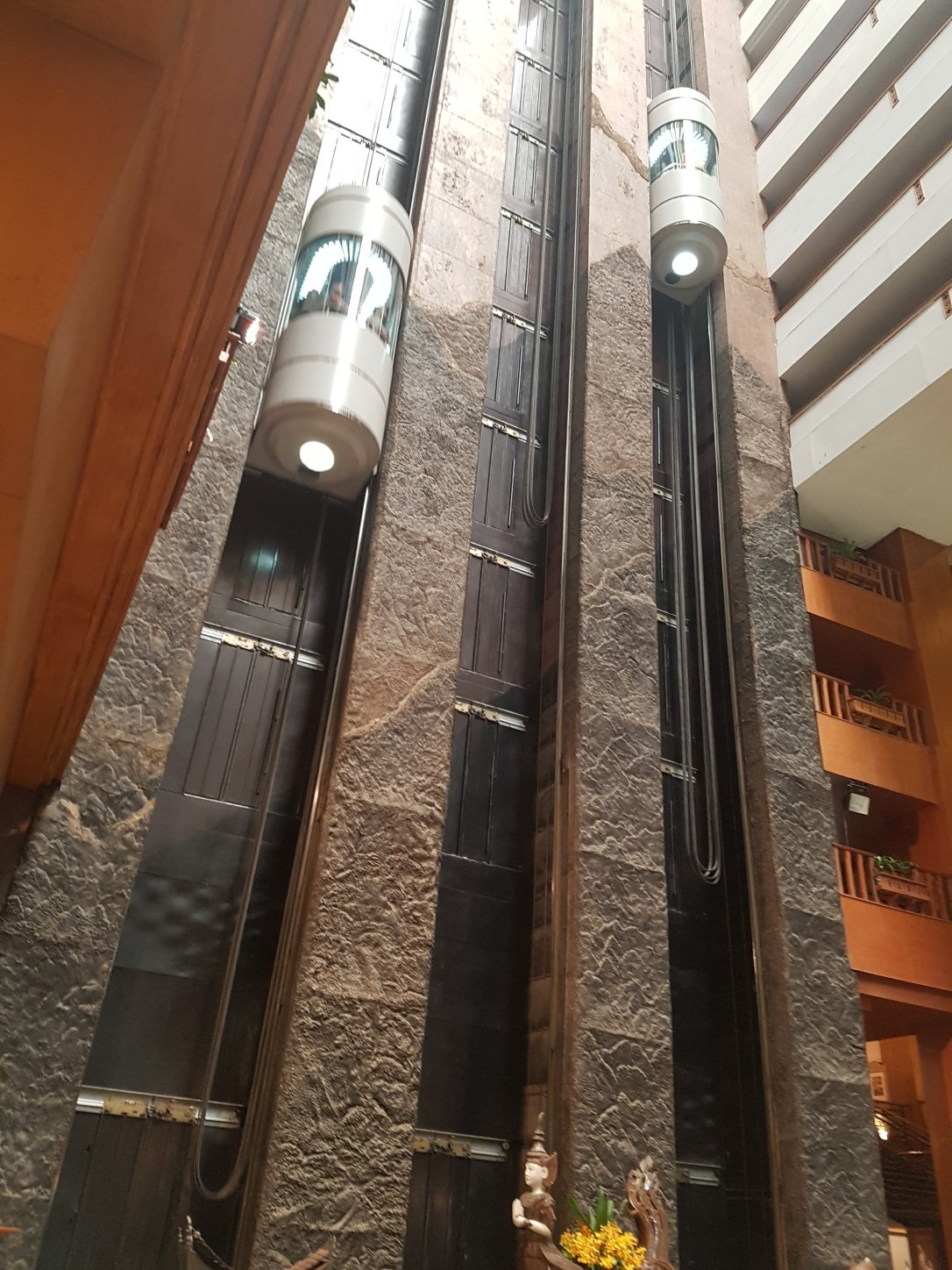 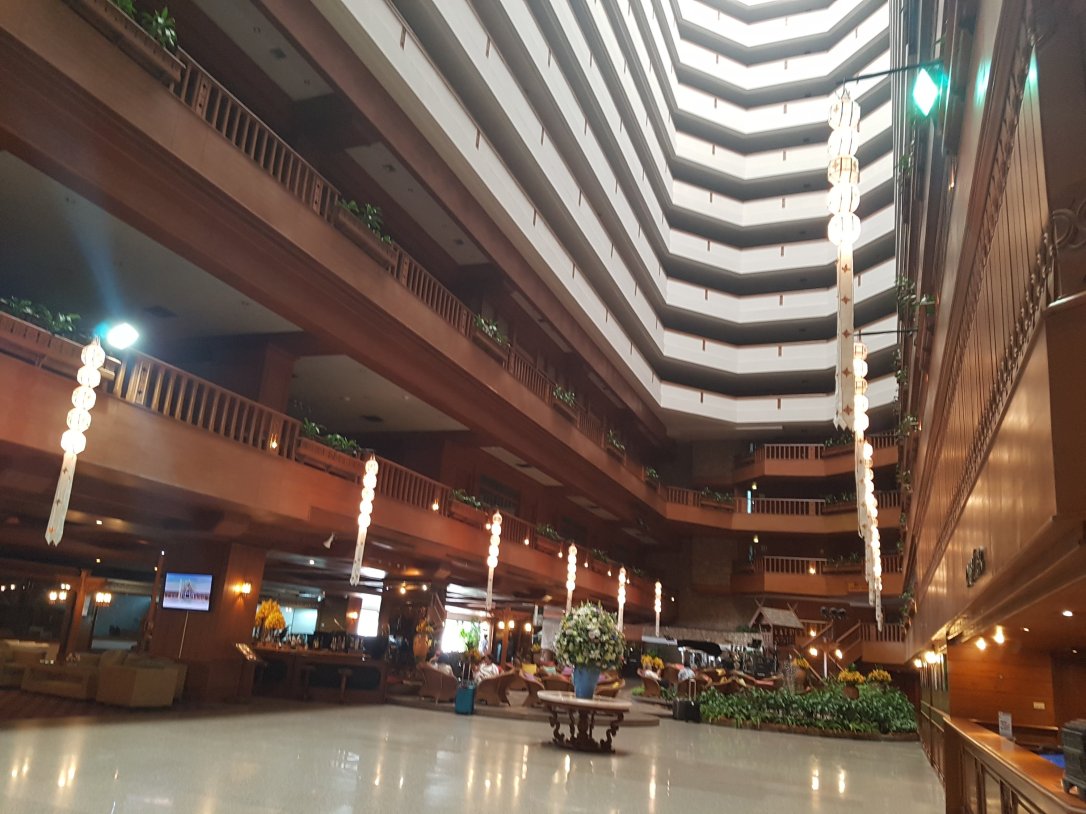 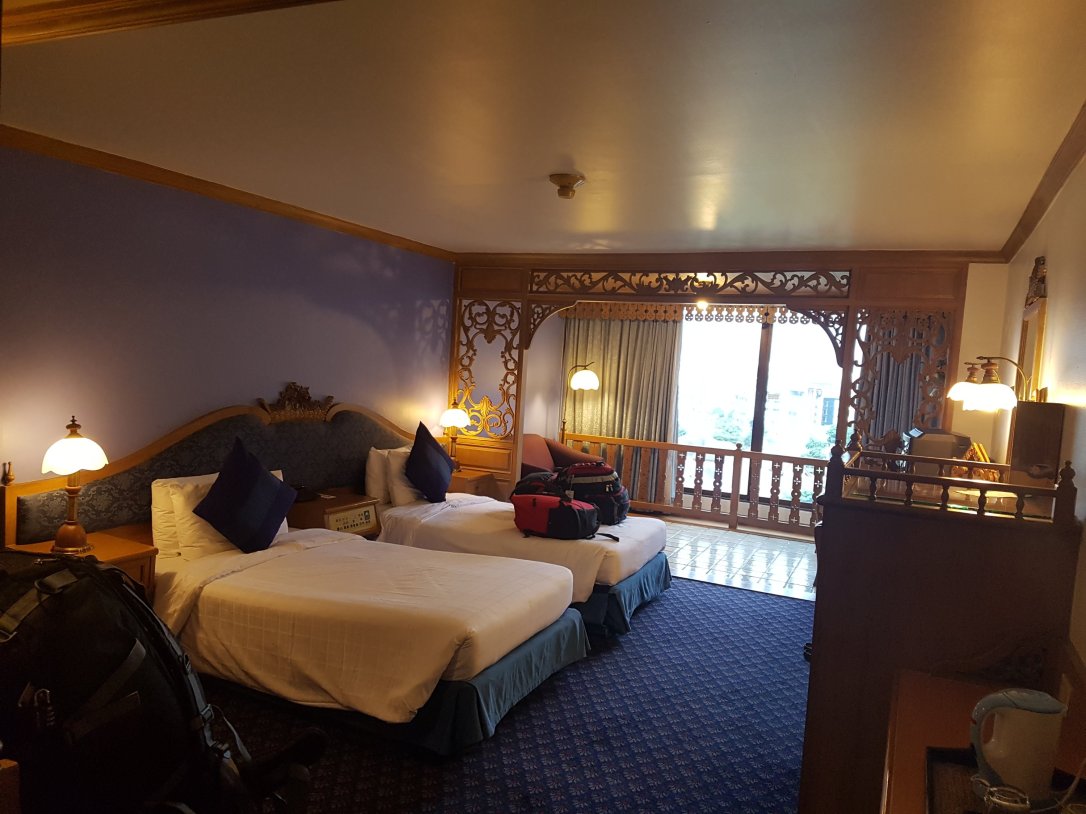 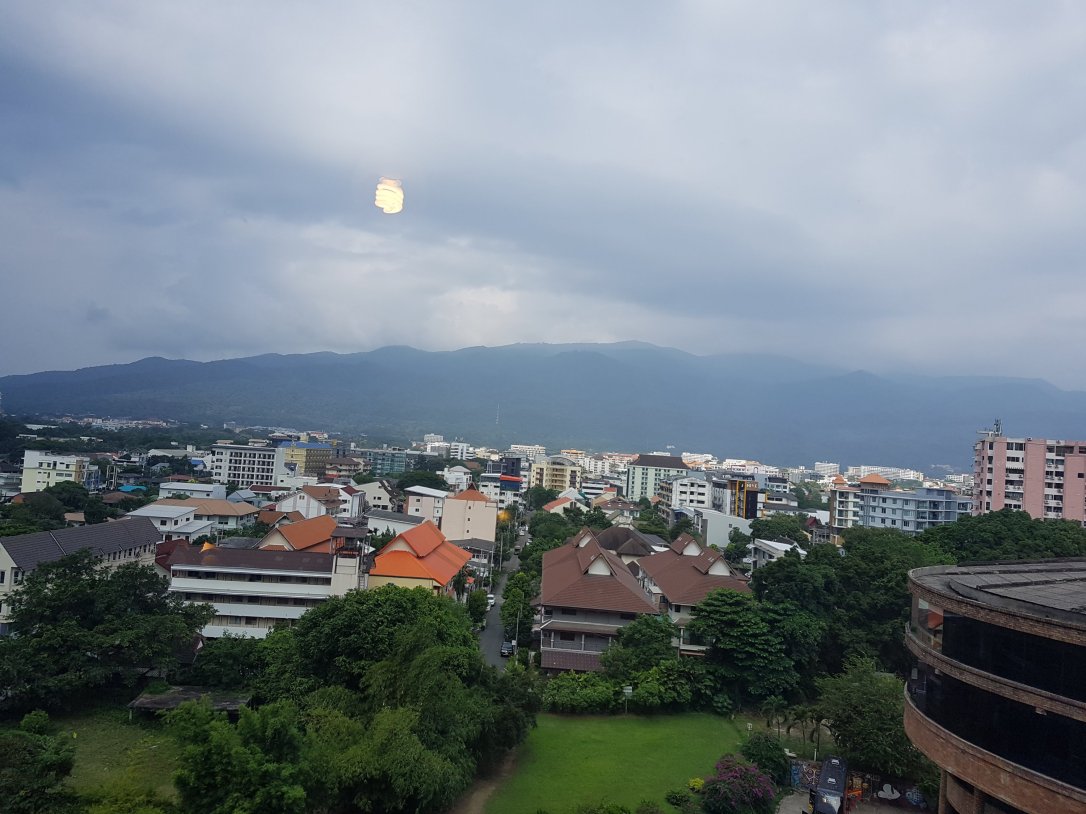 Have a great day/night!