We started our first day in Chiang Mai off with a buffet lunch in our hotel, pretty mediocre. We then took an uber up to Doi Suthep mountain! A half hour snake shaped road up the mountain to Wat Phra That Doi Suthep… a temple on top of the mountain which has a great view of Chiang Mai. I’ve read so much about it that it’s blurry in my mind but I’m pretty sure the story is that an elephant climbed the mountain and died there so the king decided to build the temple there. (I later looked it up and this is the main thing to know…)

“The monastery was established in 1383 by King Keu Naone to enshrine a piece of bone said to be from the shoulder of the historical Buddha. The bone shard was brought by a wandering monk…and it broke into two pieces at the base of the mountain, with one piece being enshrined at Wat Suan Dok. The second fragment was mounted onto a sacred white elephant that wandered the jungle until it died, in the process selecting the spot where the monastery was later founded.”

So I guess Buddha’s bone was there which is pretty cool.

We weren’t feeling very energetic after our horrible sleep last night so we opted to pay 20 baht ($1) to take the elevator up to the top instead of climbing the 306 stairs. They packed us into the elevator like sardines and up we went.

We removed our shoes and I put a shawl on to cover my shoulders. We walked around the temple and the viewpoint. 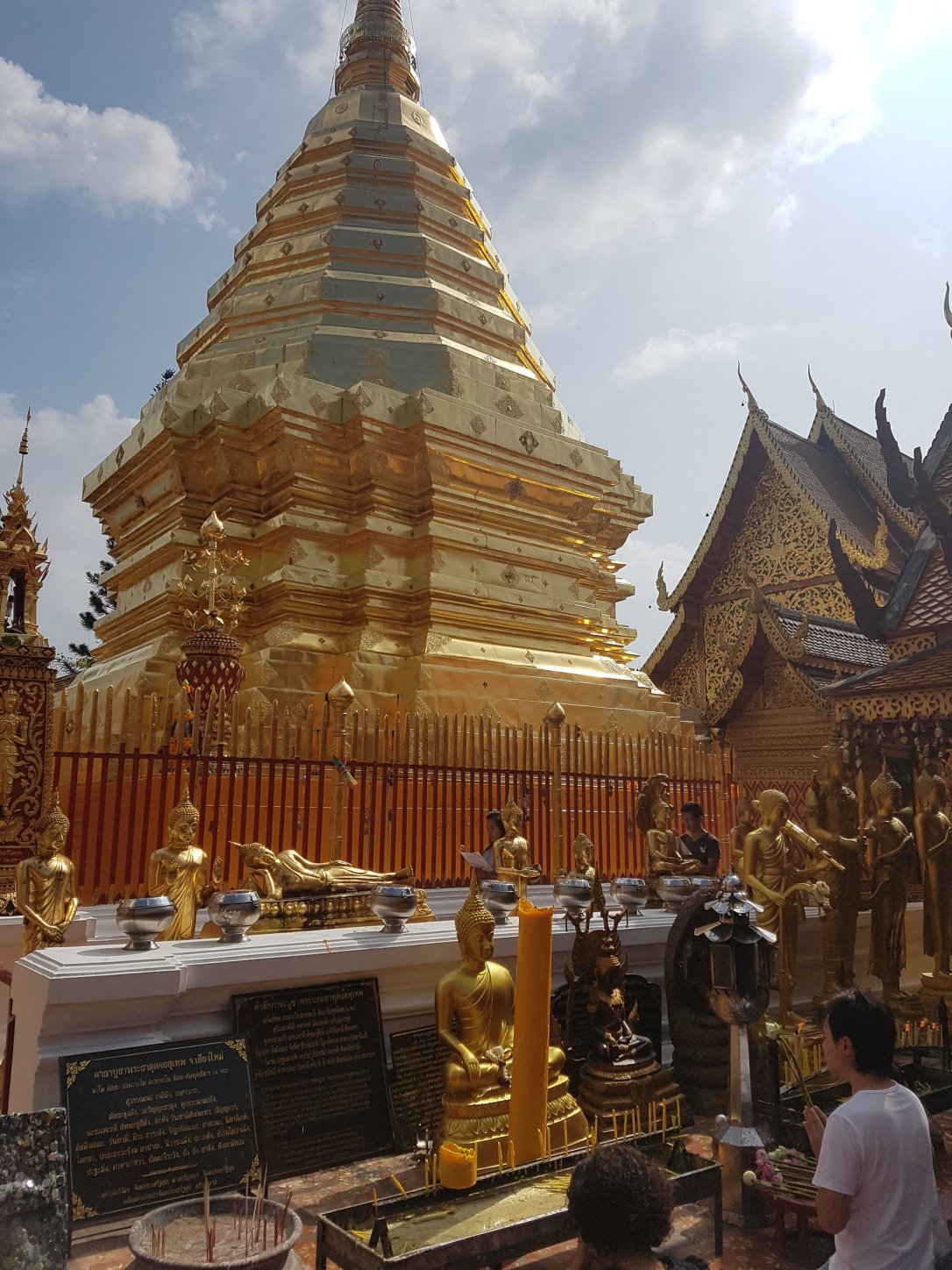 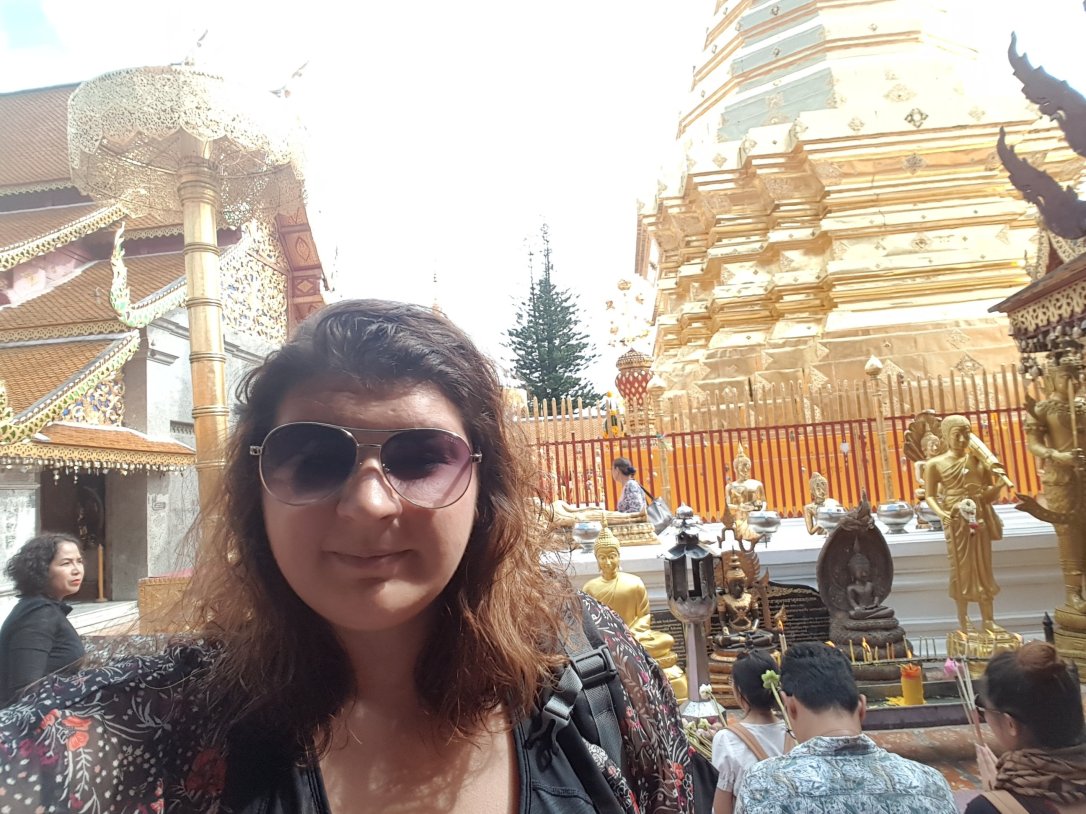 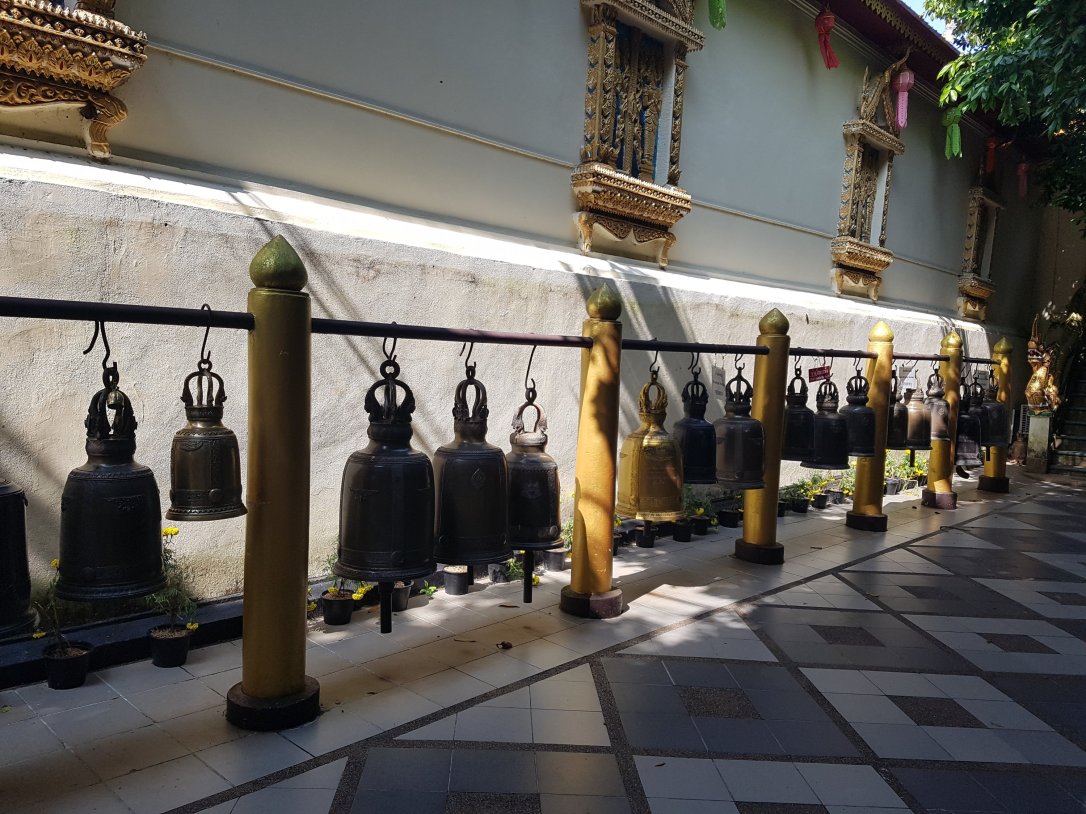 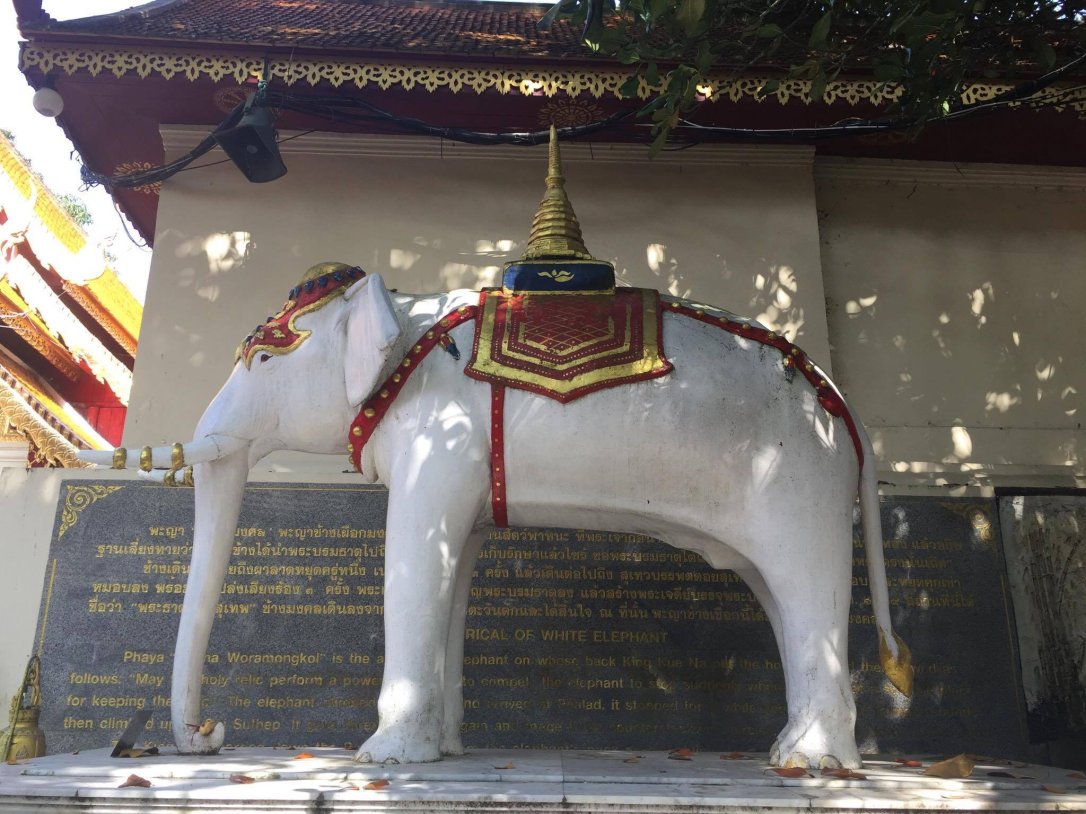 Dad says he is templed out now! We were feeling pretty sluggish and lethargic so we got some espresso and sat in the shade for a bit. I don’t know if it was because we were on top of a mountain, but it seems much cooler here in Chiang Mai and not very humid either. While dad sat and chilled, I went and looked around a bit more and saw that there were these tiny little bells hanging on some of the pagodas. I went and found one for 300 baht and asked the lady selling them what they were for. She said you write your family name on the bell and hang it on a pagoda in the temple and it will bring you and your family good luck :). So I bought one and hung it up for my fam. 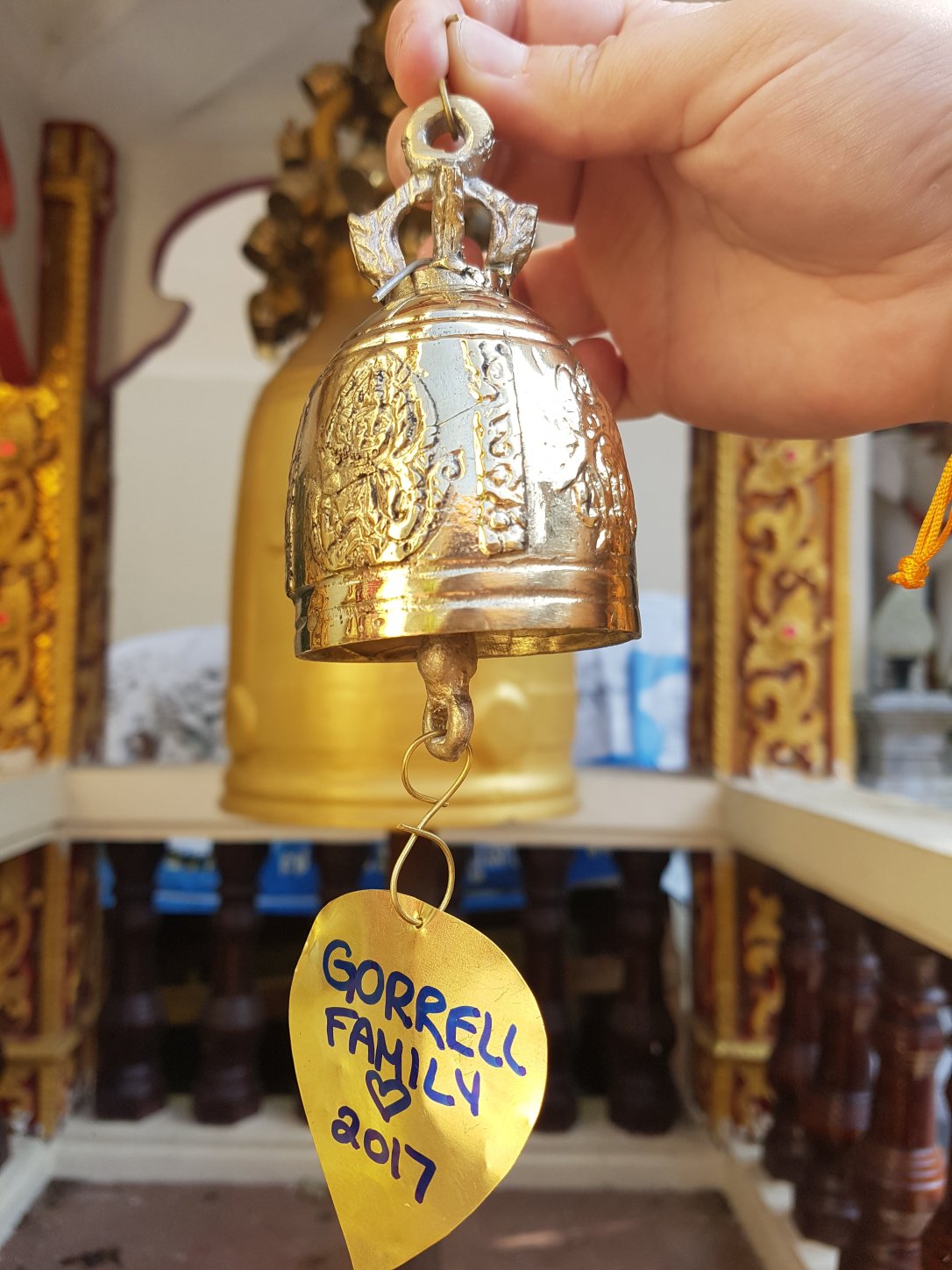 Dad thinks it was dumb I paid for that but I think it’s super cool to know that at the top of Doi Suthep mountain in Chiang Mai, Thailand there’s a good luck bell hanging for me and my loved ones!

We got a burst of energy and decided to walk down the stairs on the way down instead of taking the elevator. The stairs are really neat because on either side the entire railing is a big long snake, or naga. 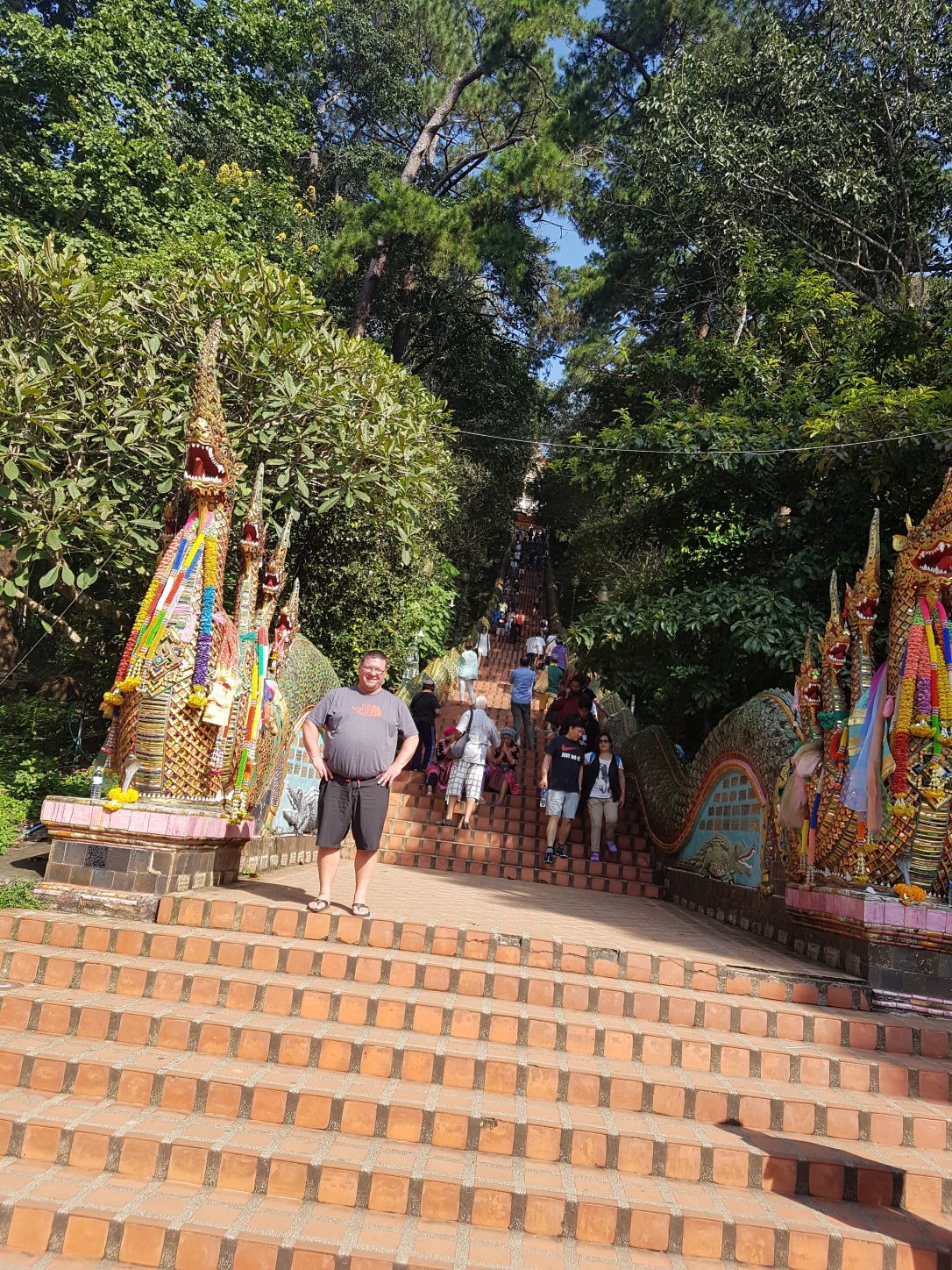 So that was Wat Phra That Doi Suthep! The same uber driver that drove us up the mountain drove us back down. We saw a couple of waterfall stops on the way down so we will probably come back this week if we have time to see them. The road was very curved on the way down and I wasn’t feeling the greatest by the time we got back to the hotel so I took a gravol and we watched some TV. I think we are just really tired today because of the awful sleep we had on the train last night. Sometimes it’s good to just have a bit of down time when you’ve been so busy.

We headed to the Night Bazaar and found some great deals! I love bartering with the Thais. They say a huge price, you lowball it and don’t budge and they end up going with your price anyways. I got a pair of fake Rayban sunglasses for $6-7 and some gifts for my family for good prices. Dad finally got his fancy Rolex watch 😂. 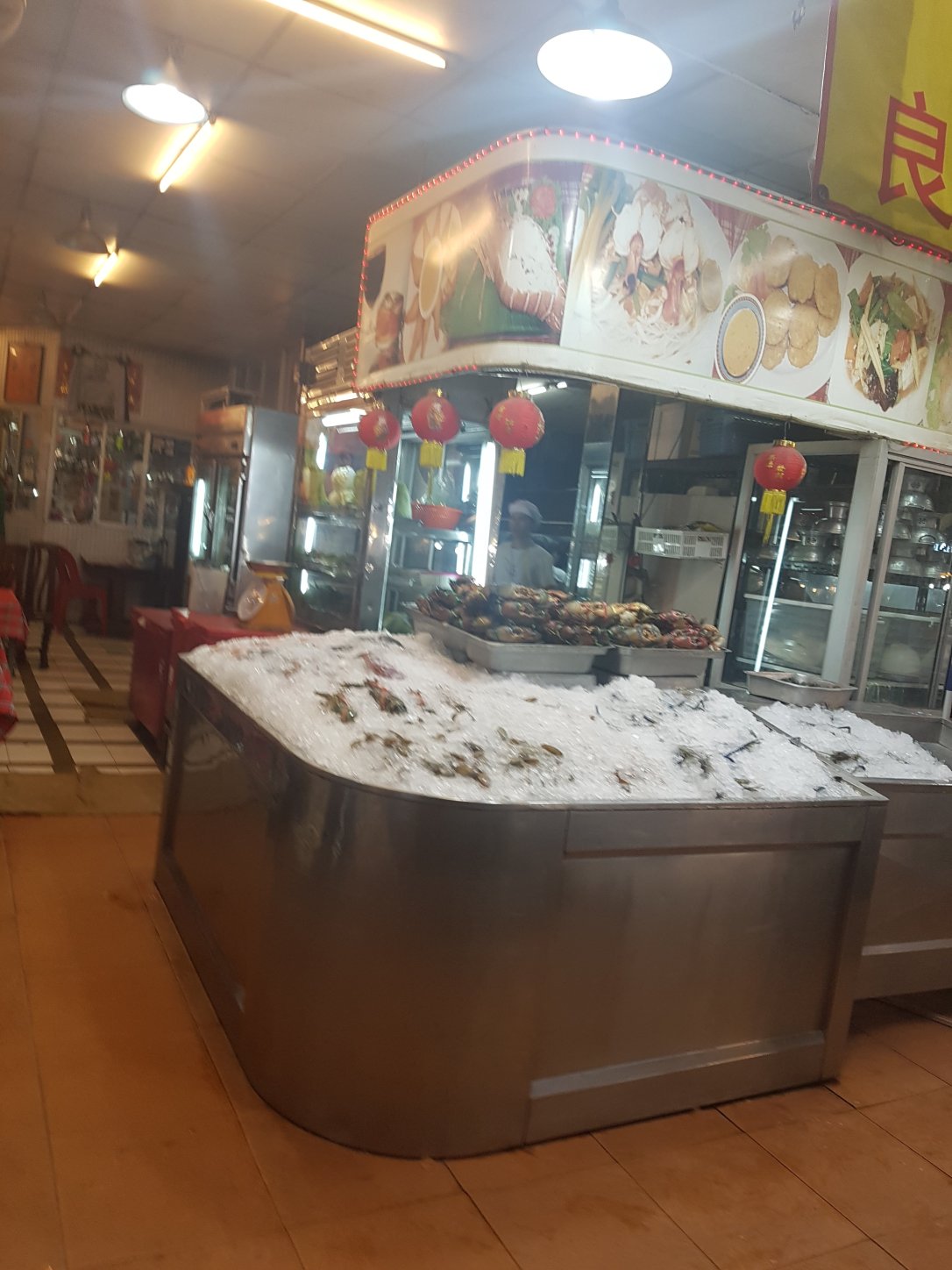 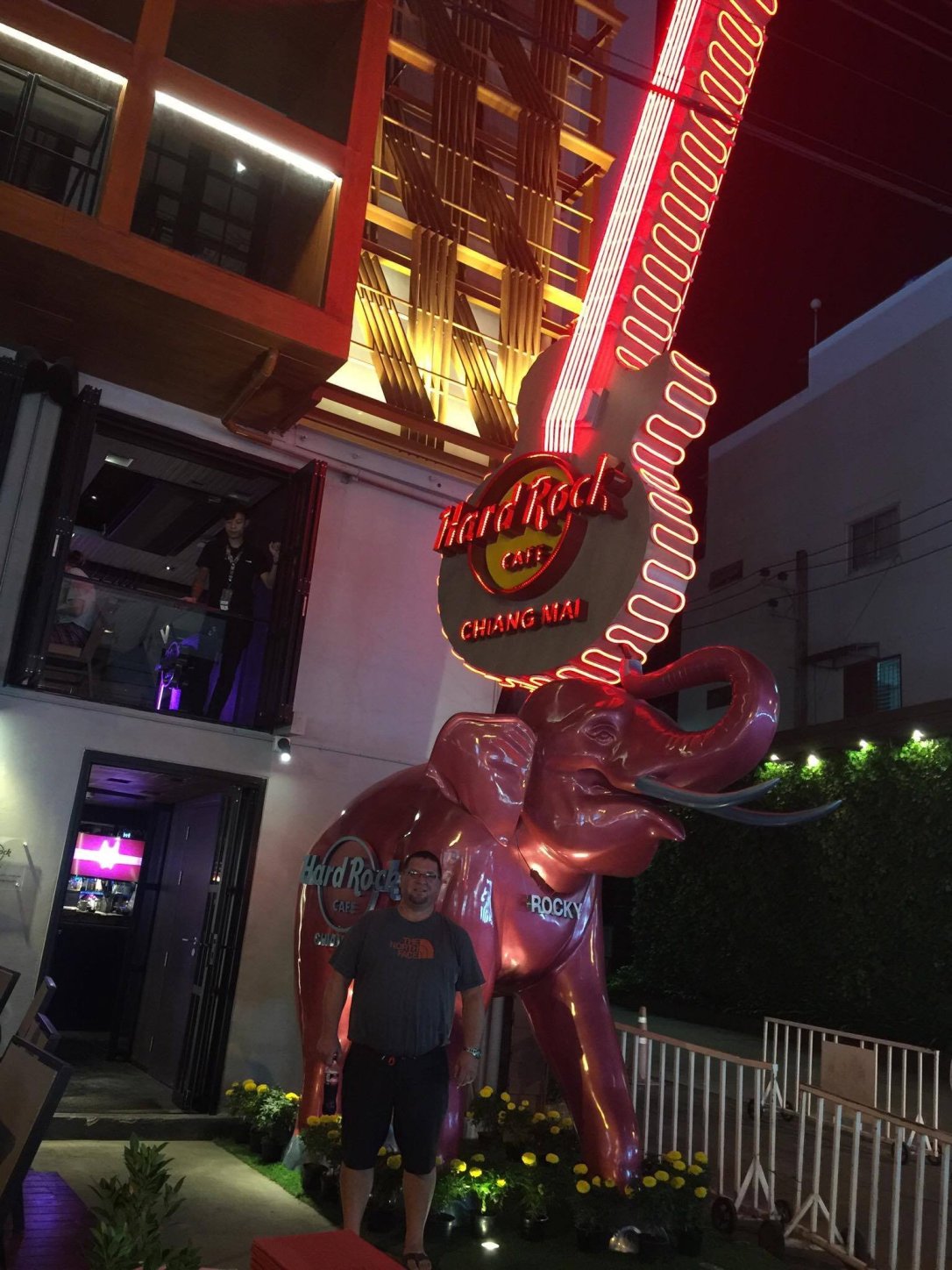 We had lots of fun and my favourite part was when we went to the restaurant, the hostesses asked where I was from and I said Canada. They started singing all these Justin Bieber songs and it was so funny. My least favourite part was uploading this stupid blog post because our internet sucks. Dad’s favourite part about today was that we got to check in to the hotel early so that he could shower lol and he doesn’t have anything bad to say about today.

So that was our first day in Chiang Mai. Tomorrow morning we are heading to the Elephant Nature Park for 2 days!!!! I cannot wait.

I will post when we come back from the park.