On Sunday we woke up early at 6am to shower and pack up for our tour that started at 730am. We dropped our luggage off at the concierge where they locked it up for us for the day free of charge. We waited until 8am for our ride but no one was there yet. I found the phone number in my email and I went back up to the hotel Concierge to help me call, and the phone number didn’t work. Oh god, what do we do!!. We already paid for the tour. But then I walked downstairs and the guide was waiting with Dad! I guess she had been looking for us and even went all the way up to our room on the 38th floor which we had already checked out of! Her name was Darah and she was sooo nice and spoke very good English. On the way to pick up the others in our tour, we spoke about the differences in education and health care here in Bangkok compared to Canada. It’s completely different and was very interesting to hear about the other cultures way of doing things.

Our first stop was the Golden Buddha. It is the largest gold seated Buddha in the world. It weighs 5.5 tons! The coolest thing about this temple is the way the Buddha got here. Way back in the 13th century they made it and covered it in plaster so that it would not be stolen. Fast forward and they moved it to Wat Traimit. While they were lifting it with the crane, the ropes broke due to the weight and down came crashing the Buddha. Some plaster broke off and they discovered that this was made out of pure solid gold! This didn’t happen until the 1950s so it was sitting there for hundreds of years and no one knew the value of it until recently. Very cool and it is so big!! I wanted some more info on this so here is some Wikipedia info:

Our next stop was China Town ! What an interesting place. The street is 1km and it’s the most expensive property in the city. First you smell sewage, then delicious food, then raw meat that’s dripping all onto the ground. Yuck! We walked through a market and this is what it was like.

After China Town, we drove to the Chao Phraya river and took a 40 minute longtail boat ride. The water was pretty choppy but those boats motor through. It was really cool seeing all of the houses along the river and we rode through a little floating market too. 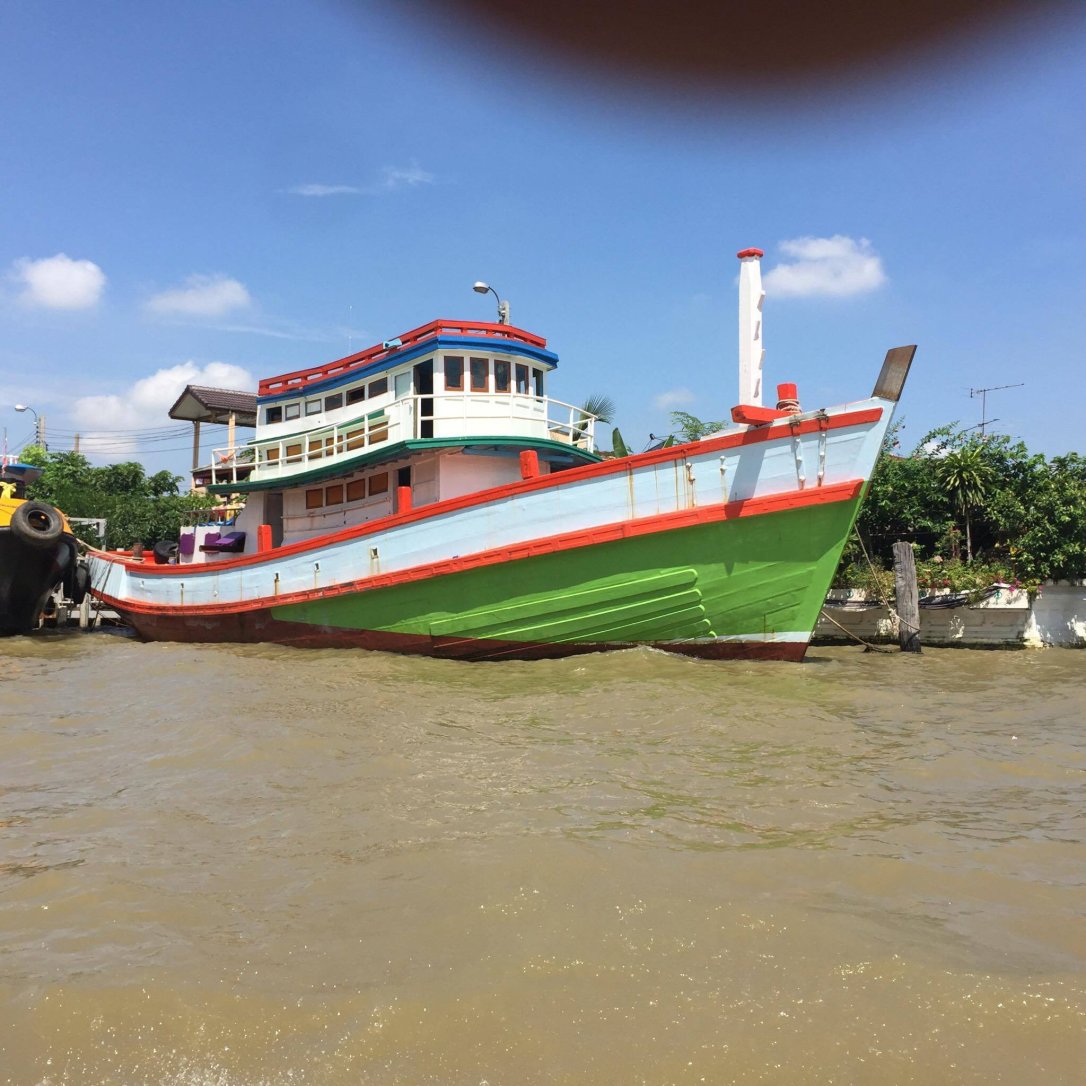 We approached Wat Arun, or the Temple of Dawn and it was beautiful ! The steps were super steep so I left dad at the bottom in the shade and climbed up. At this point it was 47°C with the humidity! We were drinking so much water and just sweating it out instantly. I did a lap around the pagoda with the go pro and the views were amazing. You’re right on the river and the Grand Palace is right across. (I didn’t get a picture of the palace ooooops)

(Side note: the Grand Palace was originally part of our tour, however it is closed for the month of October due to the cremation of King Rama IX on the 26th. His body had been placed at the palace for a year and now the new king, his son, Rama X will be taking over reign. The people here LOVE their king as this family has done a lot for their society such as implementing systems for health care and education. The new king they are not so fond of, even though they really aren’t allowed to say this. Everywhere we went people were wearing black and preparing for the ceremony this week. There are signs, pictures and shrines everywhere for him. We are planning on going back to the palace when we are back in Bangkok after the craziness dies down.) Here are pictures of Wat Arun where you can see the difference in as it is Cambodia and French influenced.

So after Way Arun, we took the boat taxi back across the river and went to Wat Pho where the Reclining Buddha rests. This thing is HUGE. 43 metres long and 15 metres high. It’s hard to get it all in a picture. This Buddha represents Buddha in his resting state right before he died/entered Nirvana. Along the walls there were little offering bowls and locals would walk down and drop a coin in every single bowl for offerings to the monks who live in the Temple. There were also signs everywhere to watch out for pick pocketers so we were very careful. Oh and we also had to remove our shoes when we entered each temple. 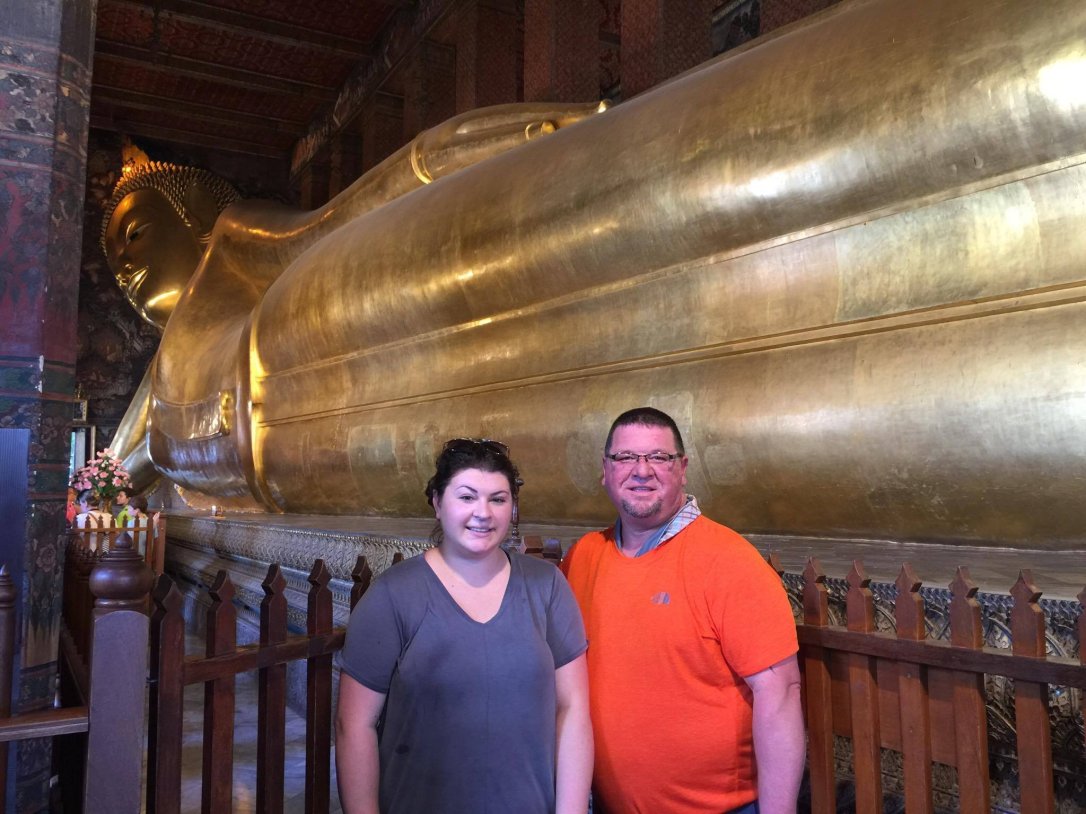 We then walked around Wat Pho more and went into a couple of other temples. 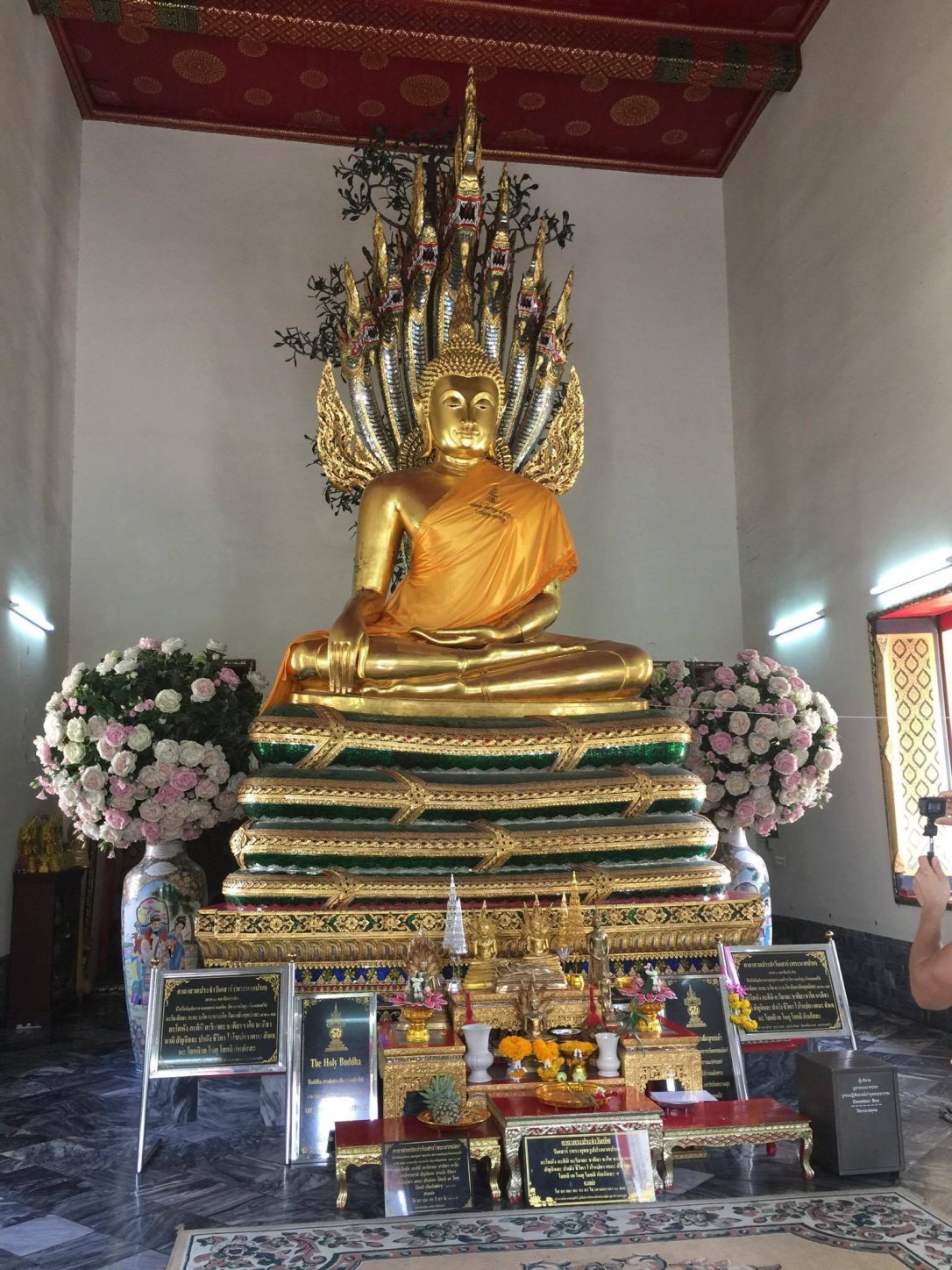 The road was closed because of the flower ceremony for the King so we walked to our restaurant where we had a delicious buffet lunch with a view of the river. I had my first Chang beer. And we had a nice visit with the family from Florida who was on our tour with us and dad got to talk about Donald Trump so he was happy 😂.

After this we were dropped back off at the hotel! The tour was amazing and Darah was unreal. All of that cost us 109$ CAD each which included all transportation, entrance fees and lunch. Well worth it and we did not have to use our brains at all to get from place to place. We learned so much from Darah and developed a love for Bangkok and the people. We also learned a lot about Buddhism which is fascinating to me.

After the tour I wasn’t feeling very well at all. We went back to the hotel to pick up the luggage and took an uber to our next hotel which is connected to the DMK airport. I chugged more water and drank an Emergen-C packet for some electrolytes and by the time we got to the Amari hotel, I felt better and was cooled down from the A/C in the car. I think i was just overheated plus the ride in the van made me a little car sick. At this point I realised that I drank probably 6 or 7 bottles of water and had not needed to pee since like 7:00am. (It was 3:30pm). Everything that we drank just sweat right out of our pores. Good thing we drank the water though!

Our hotel was amazing. Nice room, nice pool, and there is a sky walk that connects it to the airport so you don’t even have to go outside.

We went for a swim to cool off and re-packed our bags for our flight in the morning. We were hungry so we walked across the street where there were little outdoor restaurants but a rat ran in front of us so no way, we ate at the hotel!

I passed out at 9:00, I was so exhausted. The next morning we woke up at 4:30am due to a rooster outside and got ready for our flight to Hanoi, Vietnam! Off we go!

My least favourite part of today was definitely the heat. I felt like I was literally melting. I think every other day is going to seem cool now in comparison!

My favourite thing we did today was probably the Golden Buddha, I love the story of how it got there. I loved Darah too, she was amazing.

See you in Vietnam!!!!! We are going to eat ALL the spring rolls!

1 thought on “Temple Hopping in Bangkok”