What a fun 3 days we have had!! Tonight we have to go home unfortunately but I think it’s time because if not, I will be poor soon! We woke up later this morning and picked up our breakfast downstairs. We took our time and packed up our stuff for checkout and stored it downstairs with the concierge as we don’t have to leave for the Airport until around 230. This morning we are going to walk across the Brooklyn Bridge!! It’s a gorgeous day today and I think it’s the perfect way to end our romantic getaway!

We took the subway to Brooklyn and when we got off, it was quite foggy and damp. We walked to the river for our first glimpse of the bridge and we could also see the skyline covered with fog. Where’s that sunshine! 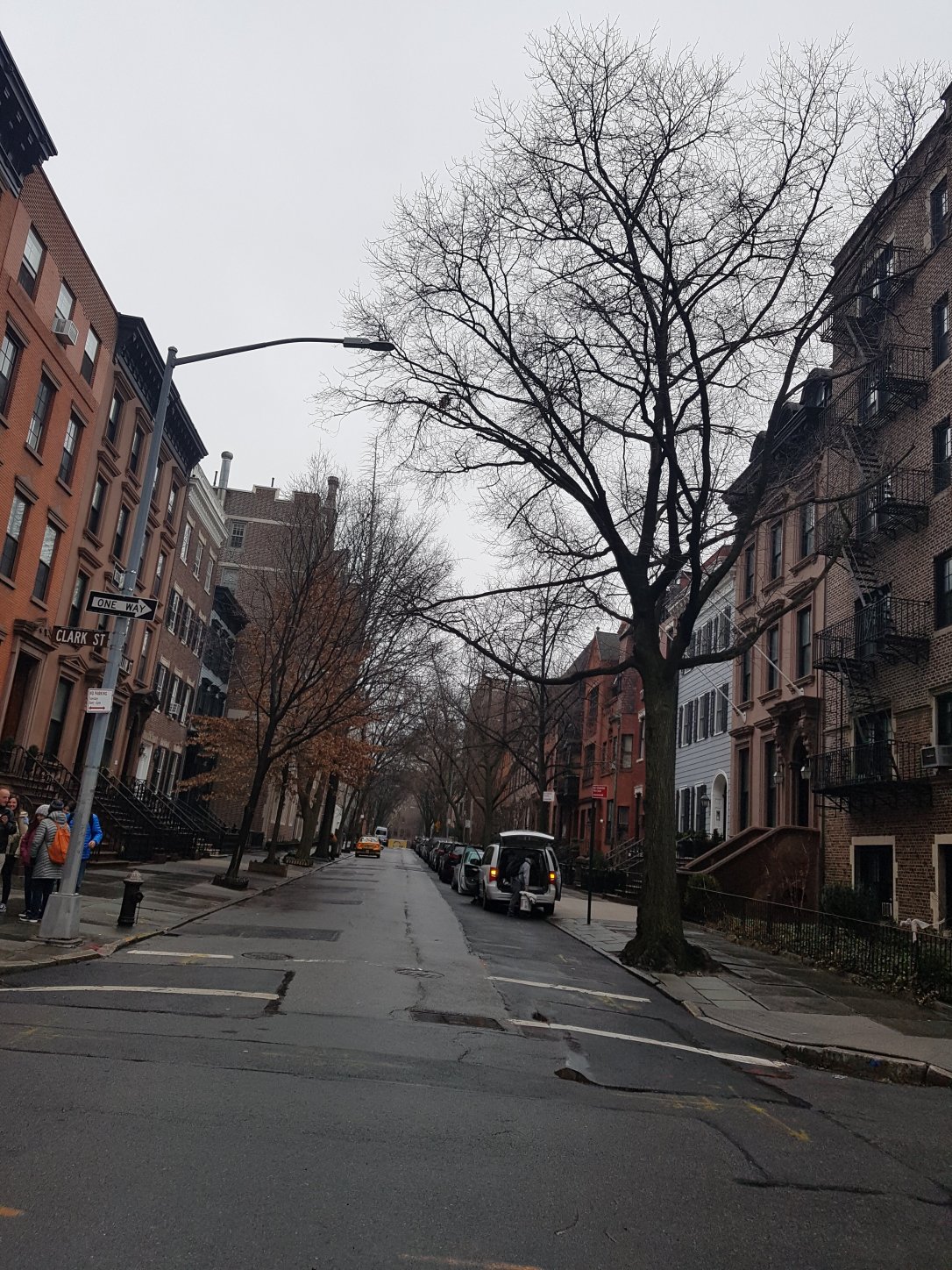 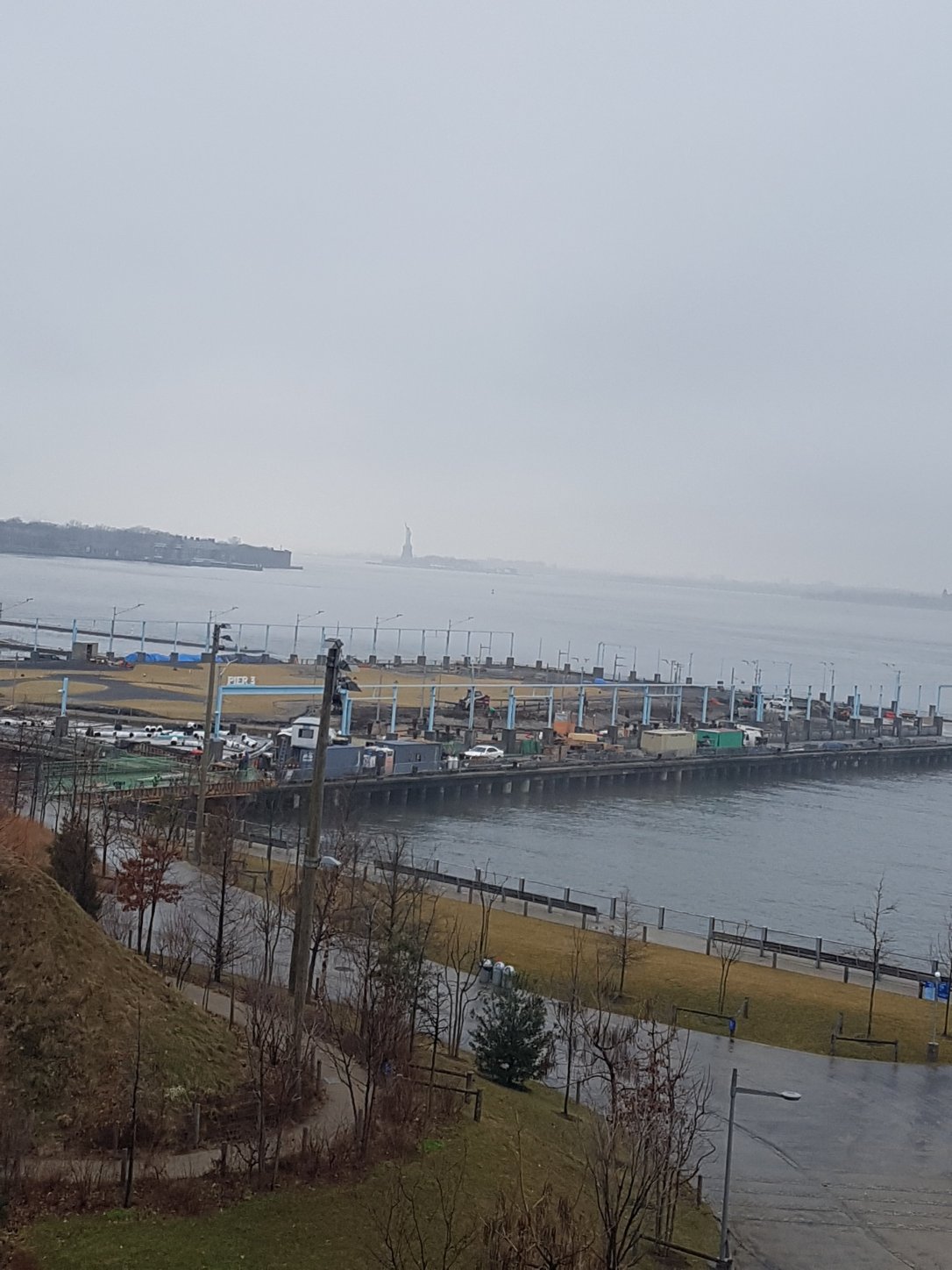 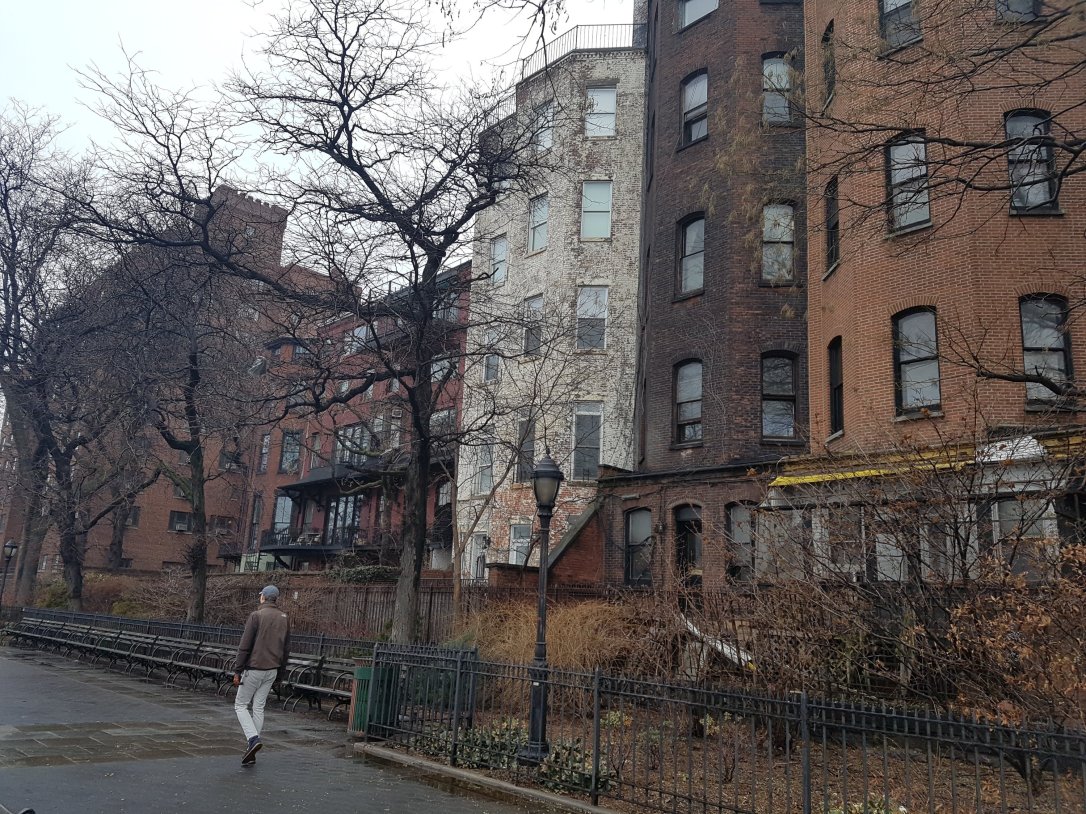 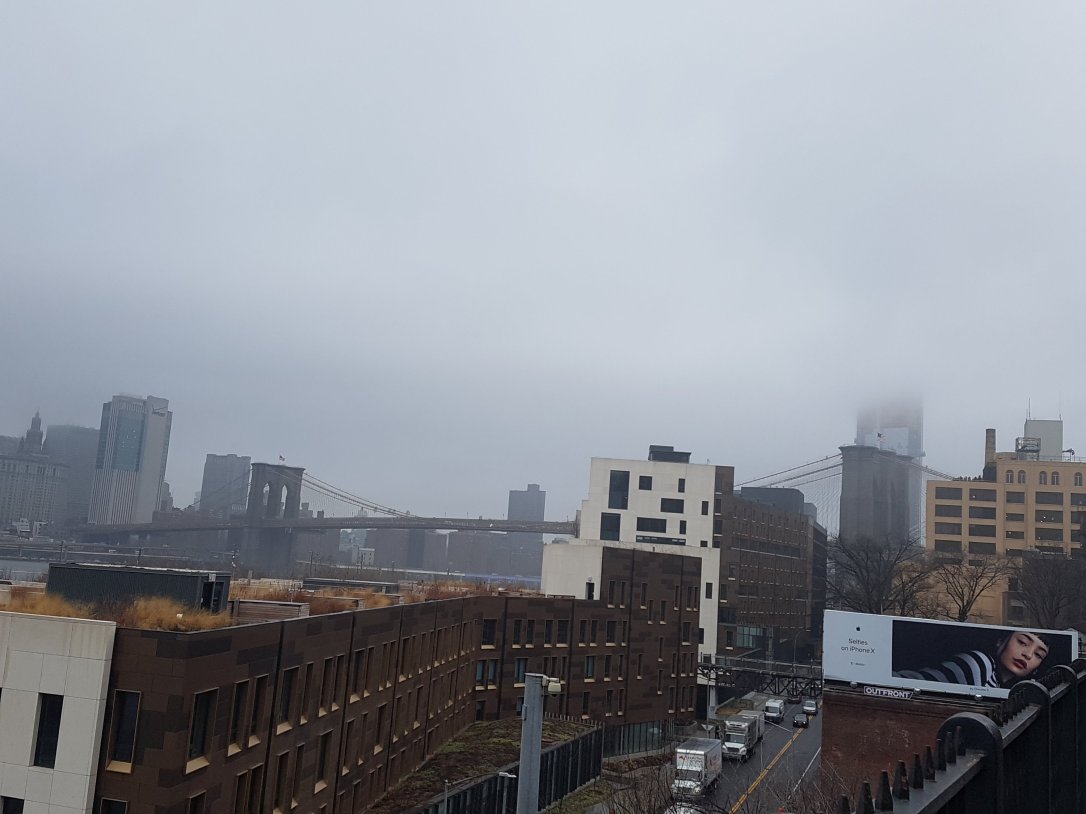 Brooklyn looks so different! We walked towards the bridge and came upon DUMBO which is the area under the bridge (Down Under the Manhattan Bridge Overpass). It’s a trendy area full of cafes, cobblestone streets and all these converted warehouses. Everywhere you turn you have views of the Manhattan and Brooklyn bridges between the buildings. It’s really neat! We walked down to the waterfront and got a good look at the huge bridge from underneath it. 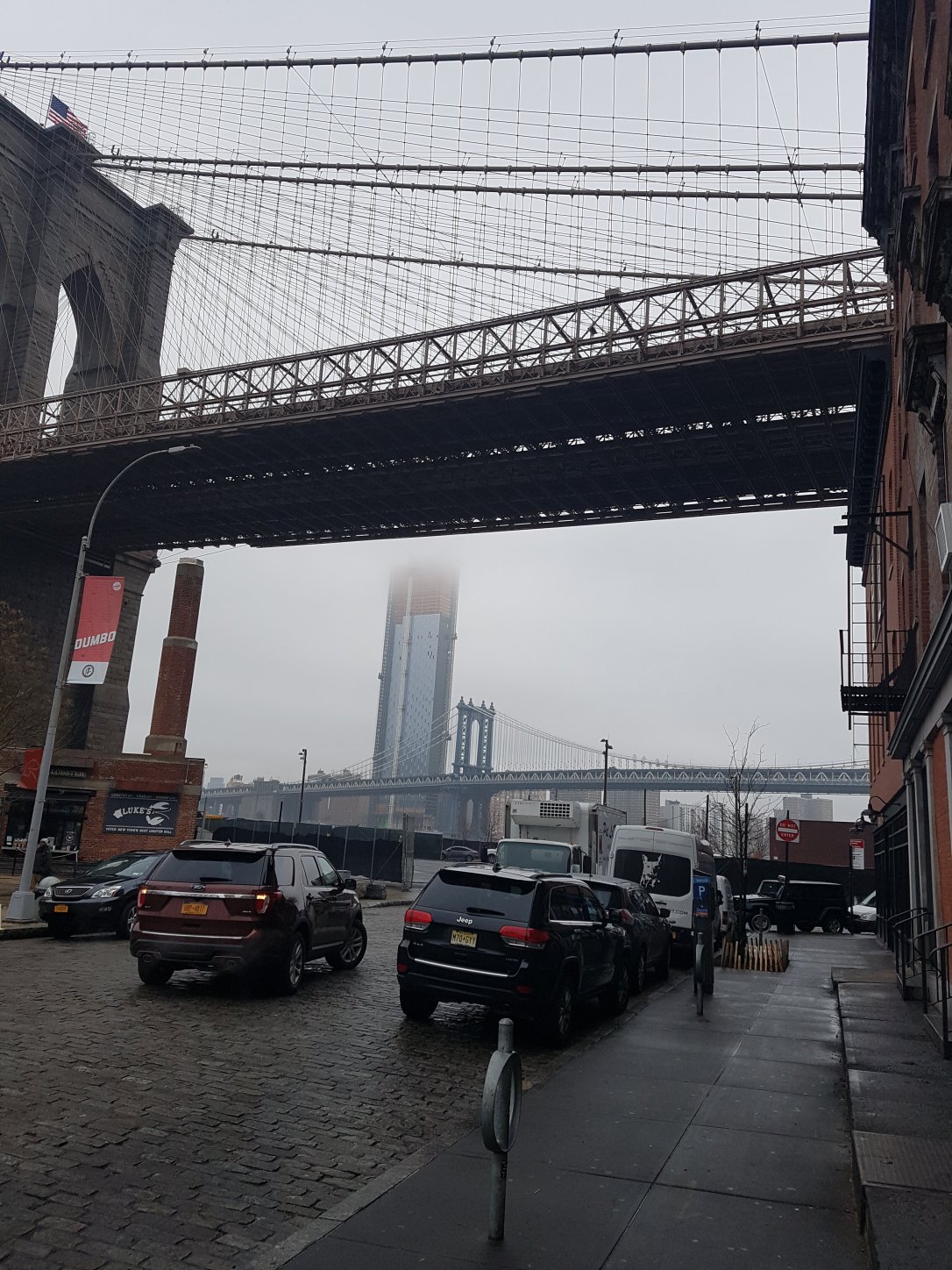 It was still foggy and we were hungry so we walked up the street to a famous Brooklyn Pizza joint called Grimaldis. Apparently it’s New York’s #1 pizza! The building is older and when we walked in the guys were making fresh dough and throwing it up in the air. It was super authentic and I couldn’t wait to try the pizza! We only wanted a slice but they only sell full pizzas so we ordered a small and it was huge! We ended up finishing the whole thing because it was so good! The fresh mozzarella and basil leaves with the fresh crust was just so delicious. We decided it was the best pizza we have ever had because we have nothing like it to compare it to! 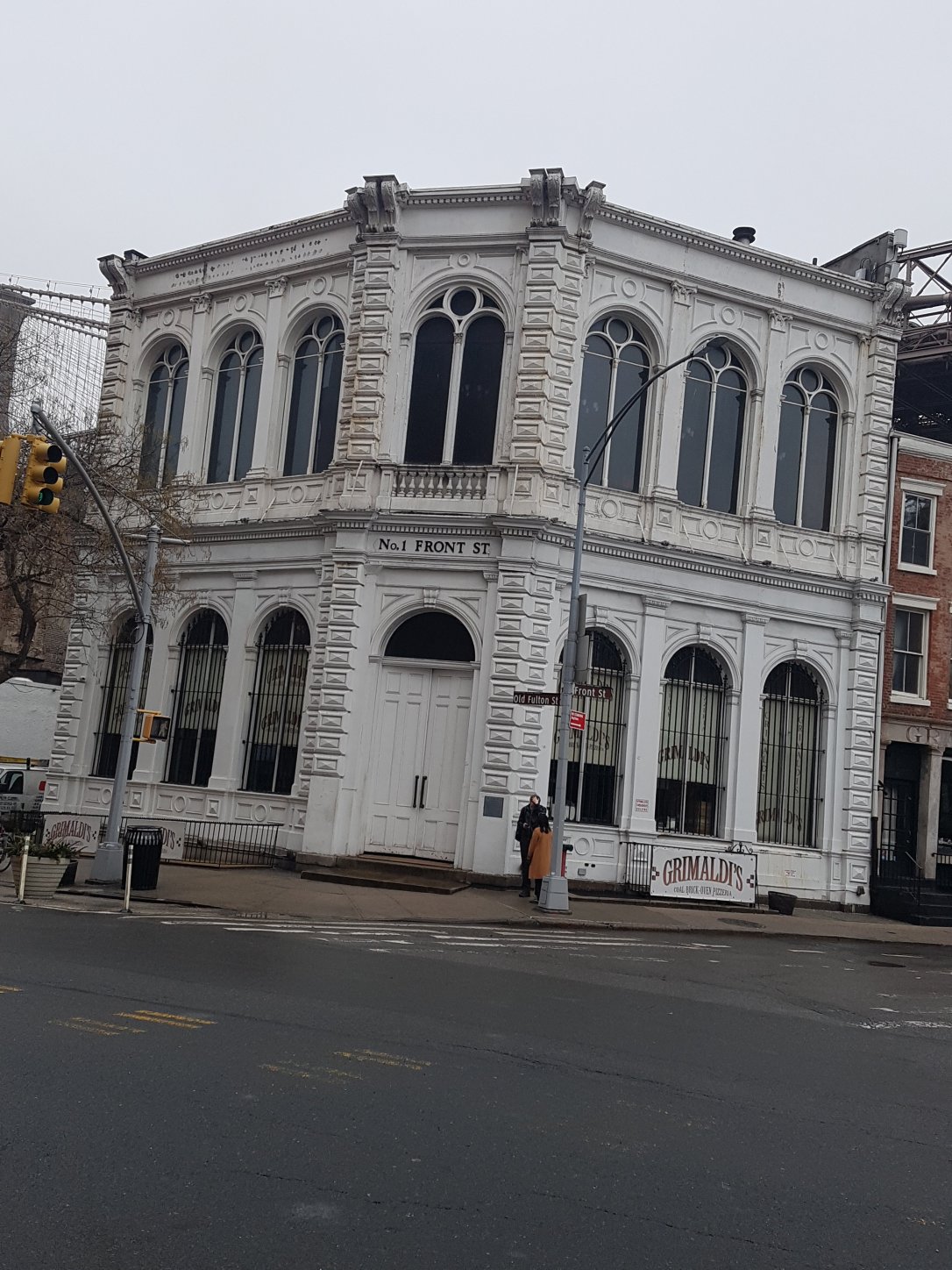 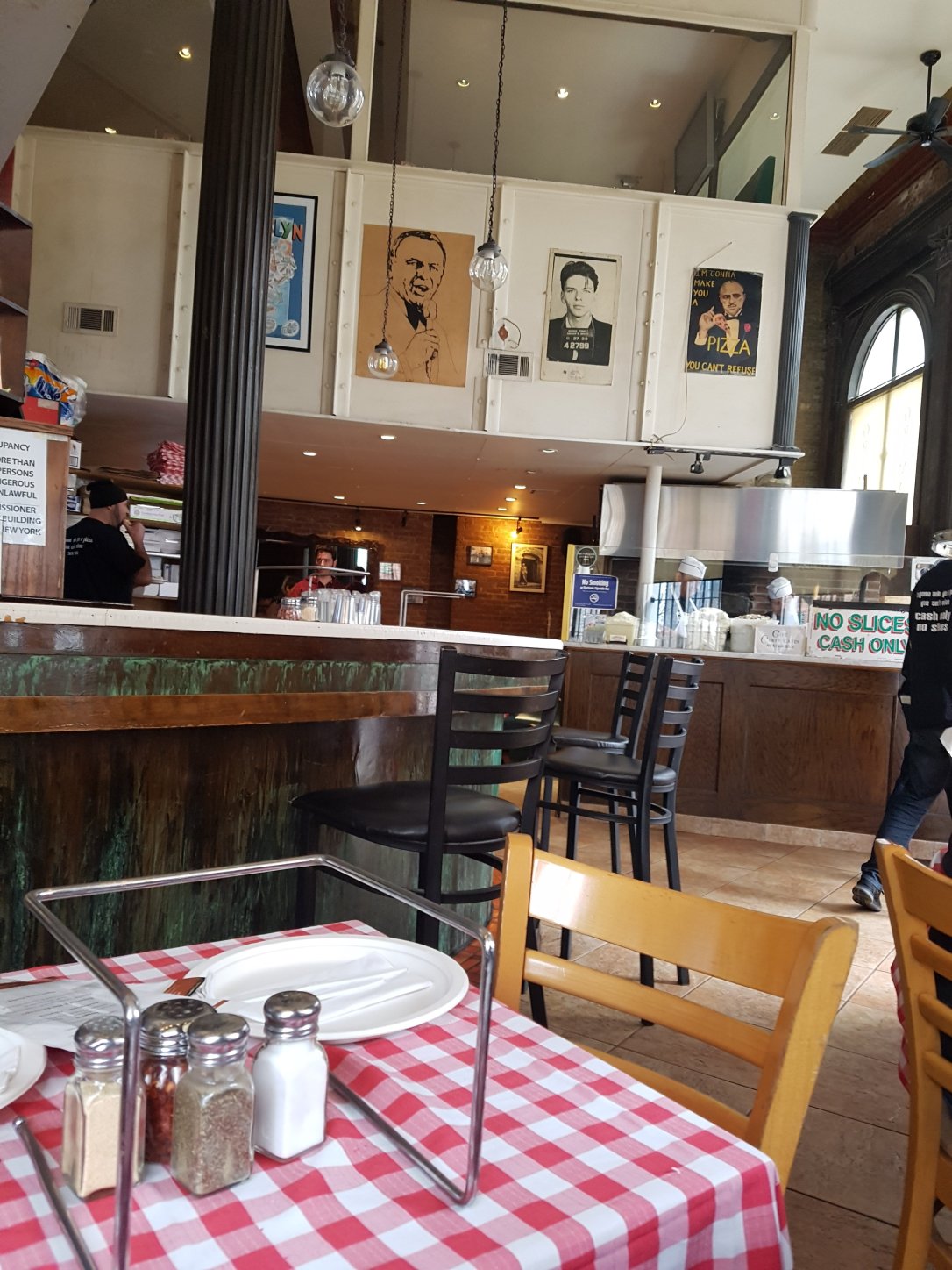 Yum!! Now to waddle to the bridge and walk across back to Manhattan. We found our way to the stairs up to the bridge and as soon as we started walking again, the fog cleared and the sun was shining! Perfect timing and it was so hot! On the left side is the walking path and on the right is the bike path. If I was riding a bike I would have screamed at so many people. All these tourists (Not us lol) were not paying attention and when bikes came by they would yell and ring their bike bells to clear the path. Then the people walking would be all annoyed that they were yelled at while the lanes are clearly marked. The views of the bridge were so beautiful. I love how these pictures turned out. 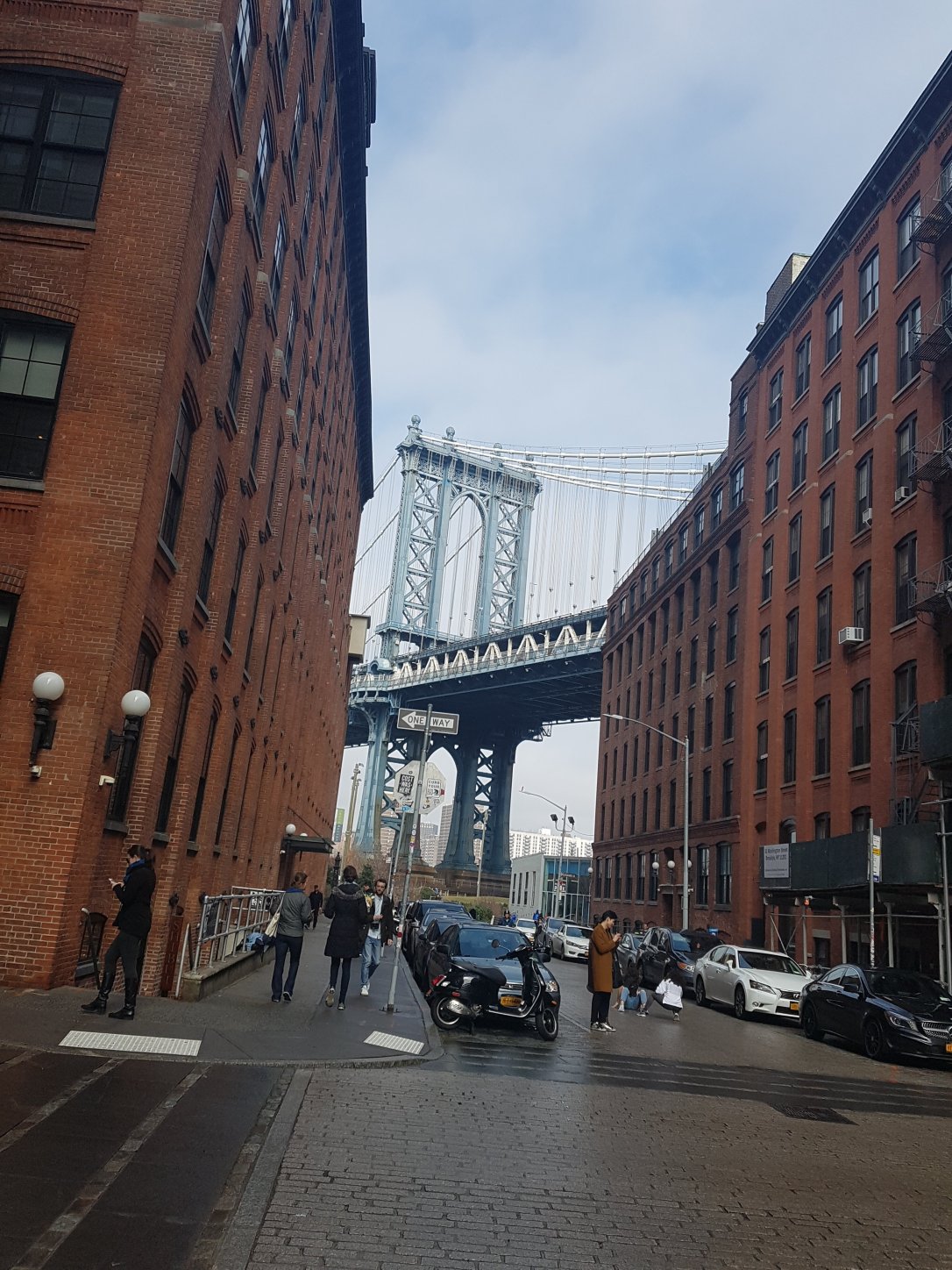 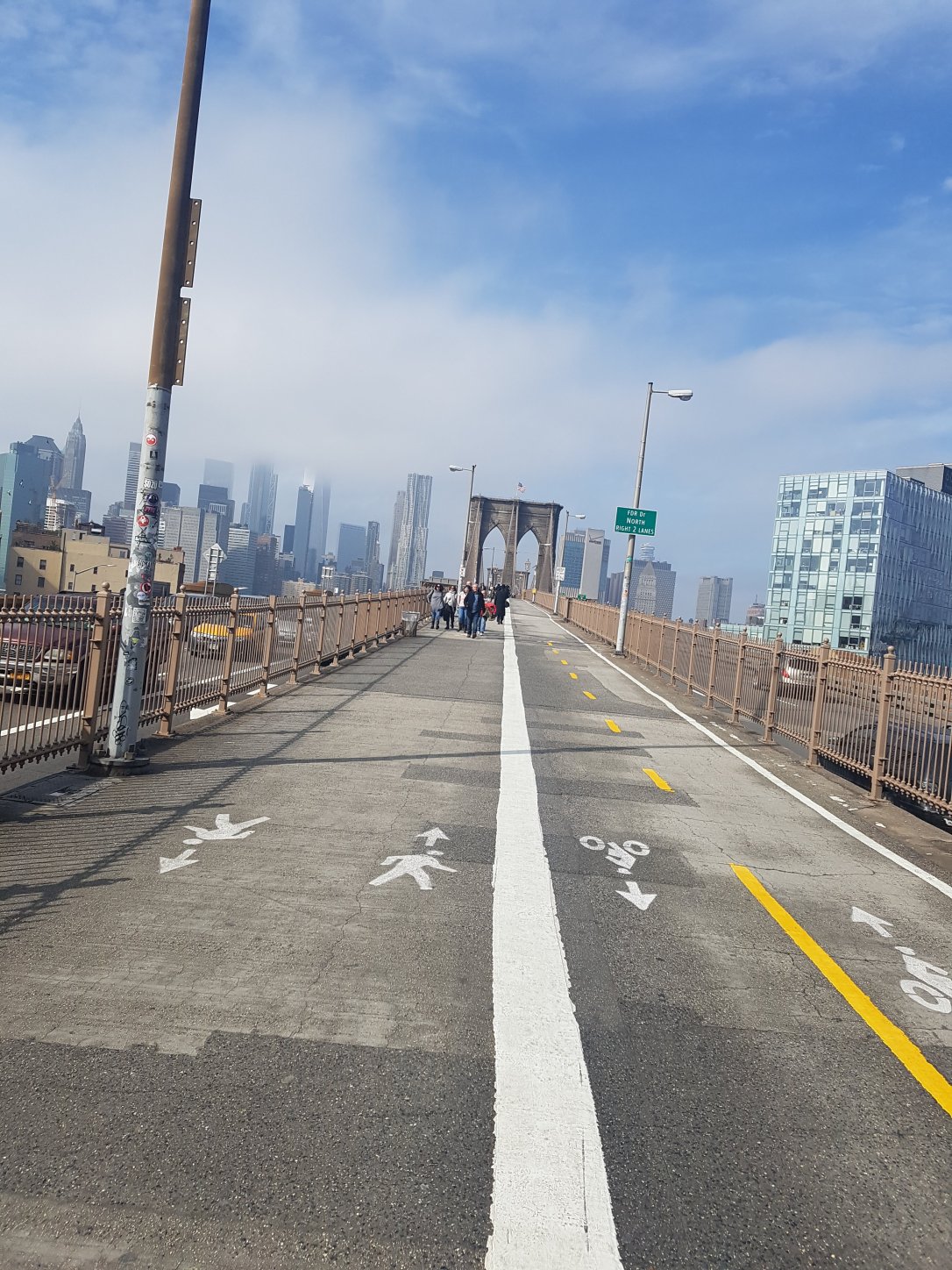 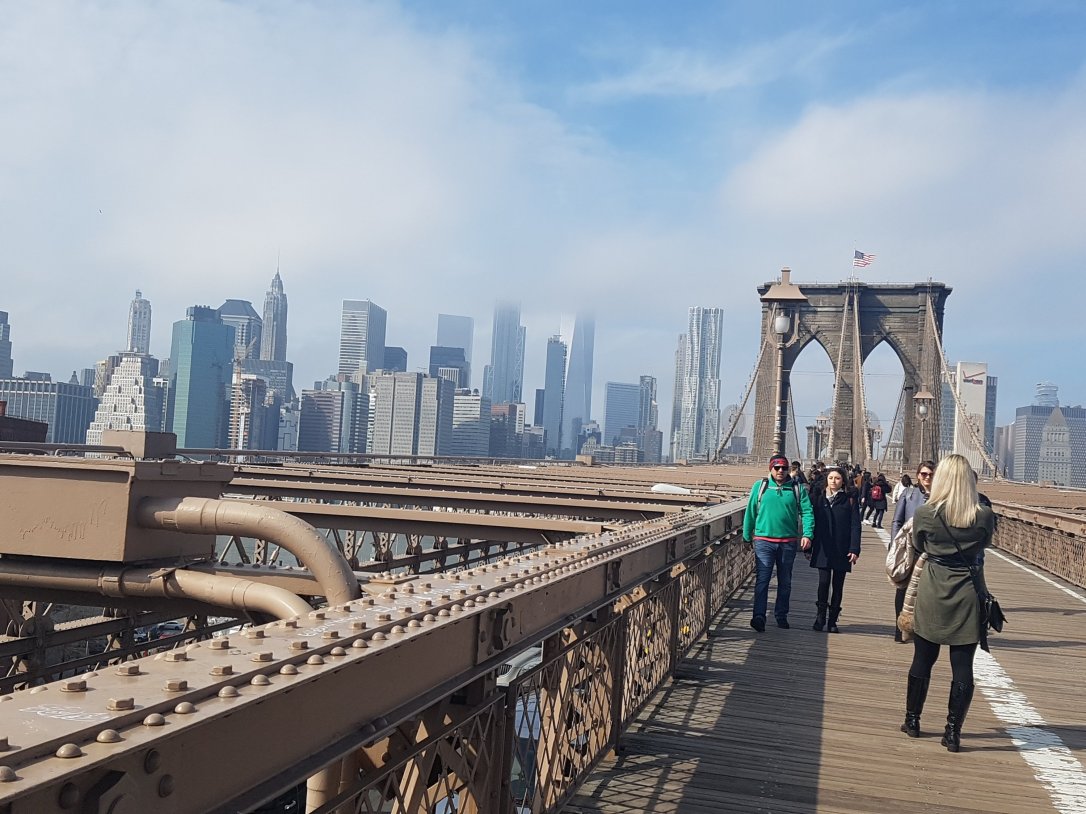 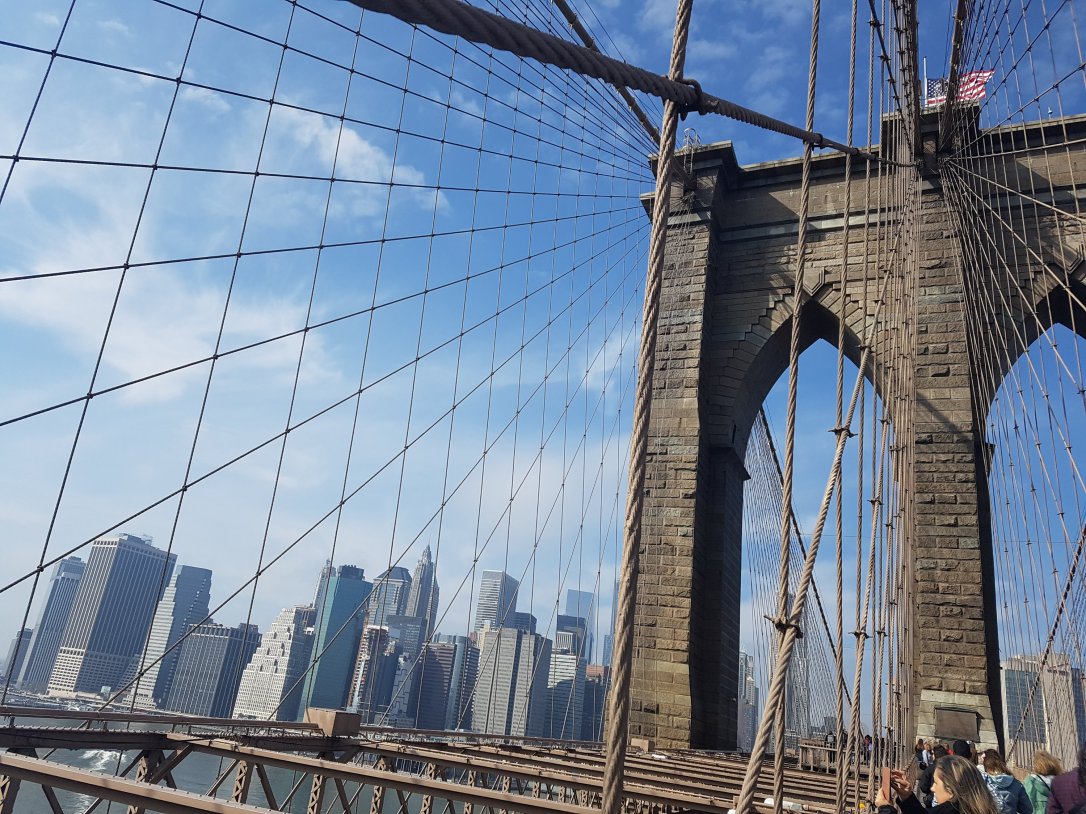 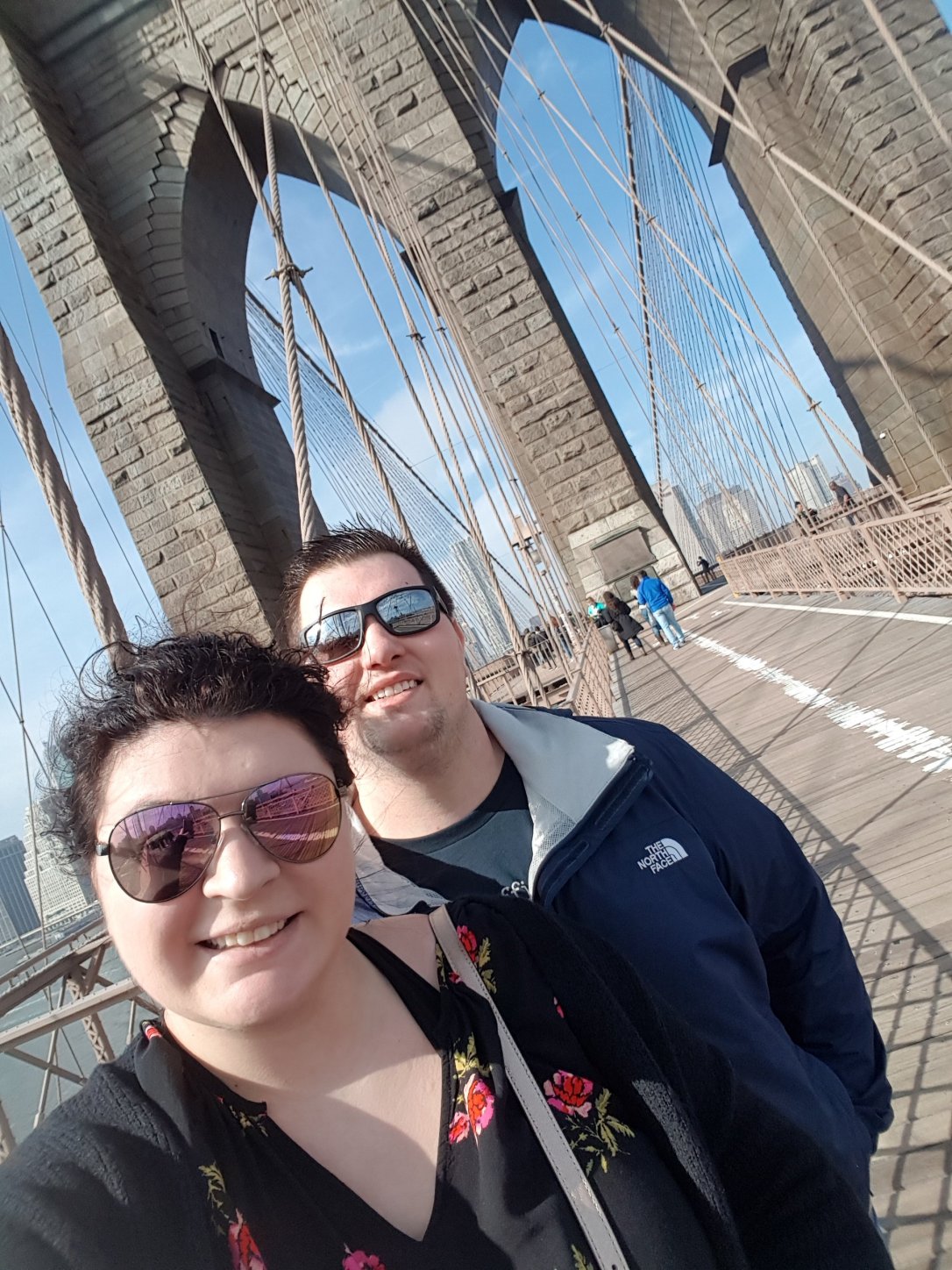 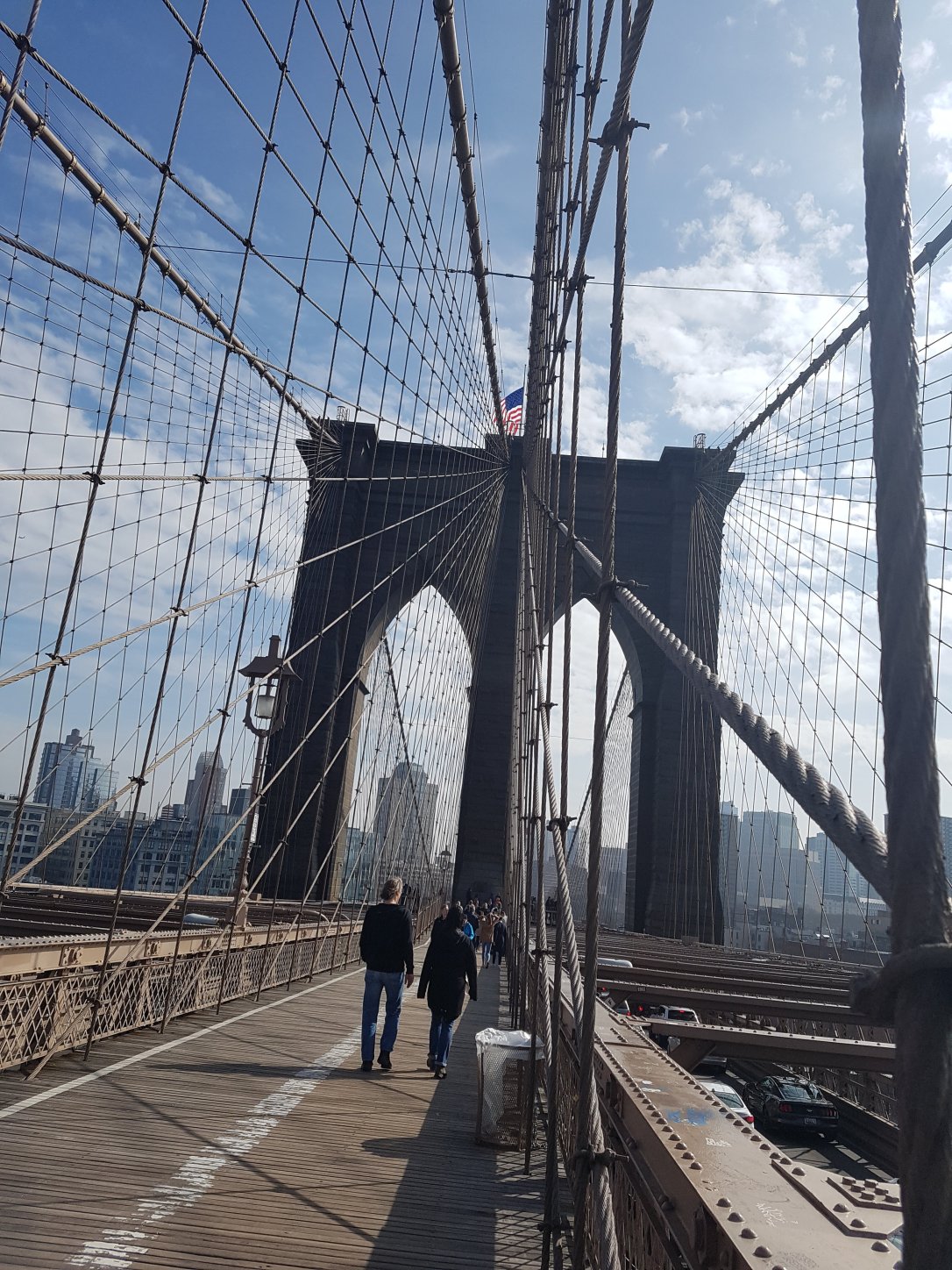 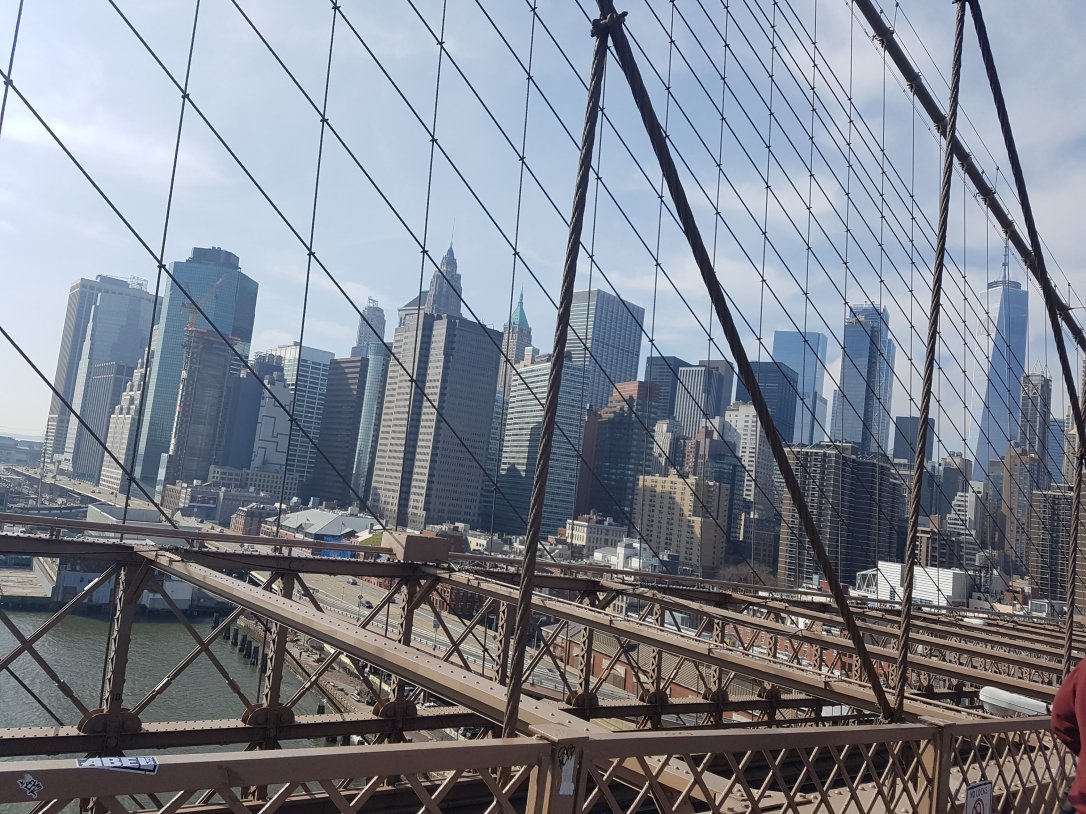 So cool!!!! I’m so glad we decided to do this. It was already getting close to the time we had to head to the airport so we found our subway station and took a train back to our hotel. On the way we passed City Hall. 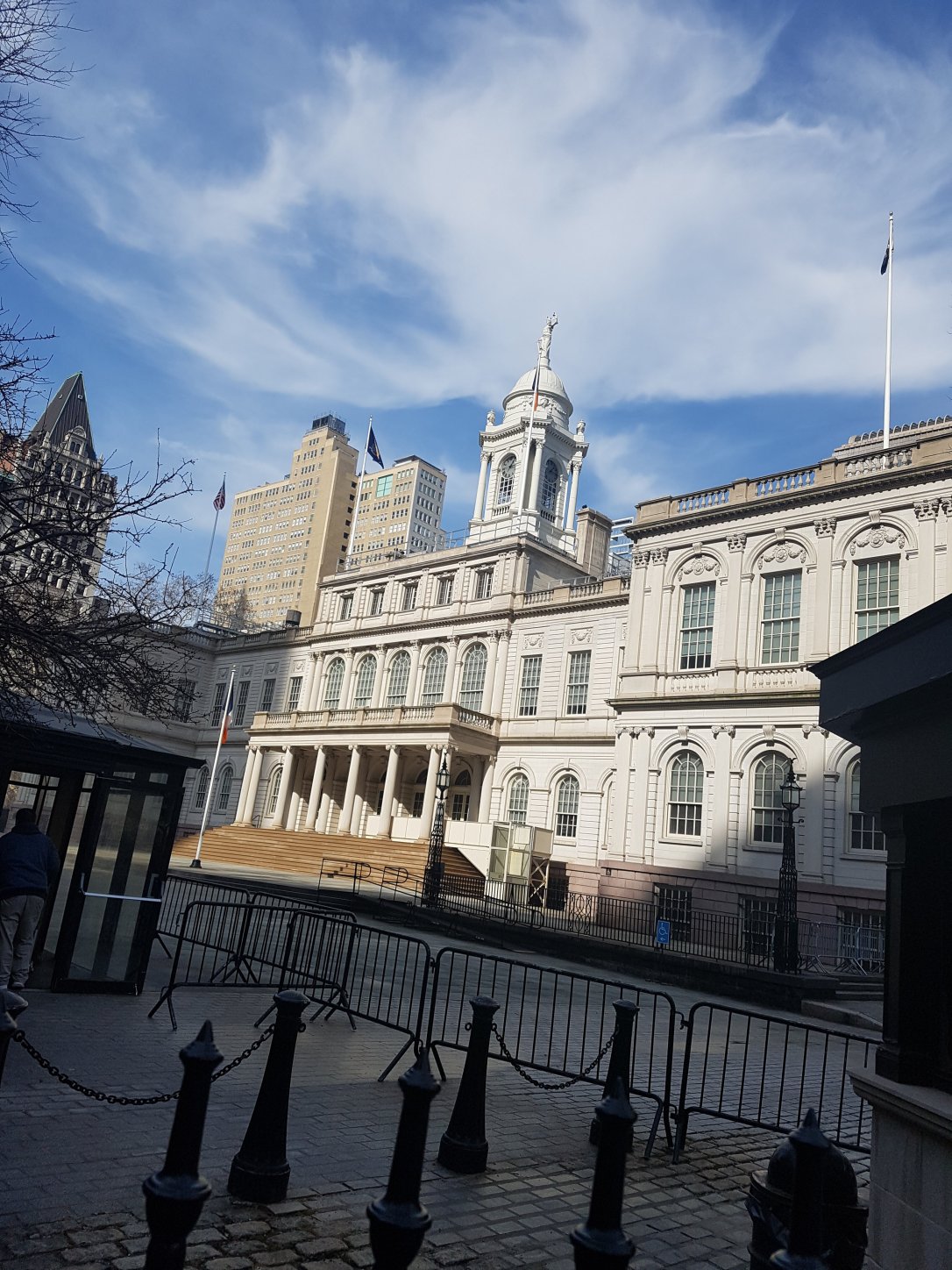 We got our luggage back from the basement of the hotel, stopped for a cold drink and headed across the street to Penn Station. We have to take the New Jersey Transit back to the Newark airport which takes about half an hour, then take the Airtrain to Terminal B. When we were on the train, I got 3 emails from Porter saying our flights were cancelled and delayed. When I got to the check-in desk, they said weather in Toronto was causing delays. She moved our Toronto-Thunder Bay flight later as well. We went through security, found our gate and had a drink/lunch right beside it. There were 3 Porter flights to Toronto and they were all delayed. We sat for about 1 1/2 hours and then the lovely announcement came on that all flights were cancelled until tomorrow. Great! It’s a good think I didn’t have to work tomorrow. Andrew had a meeting for his degree project with his professor in the morning so he emailed him explaining and told his group. Everyone was in an uproar and the Porter staff had to call security to come calm everyone down. We figured there was nothing we could do about weather so why get riled up about it. My main thing was that I was pissed we came all the way in from the city and were stuck in Newark for the night. Sounds boring! And we have to pay for our hotel because weather can’t be controlled. So we quickly booked a hotel before everyone else and we grabbed a cab there. I was texting my auntie and mom and they were suggesting things for us to do in Newark tonight. Do we take a train back to the city? It was already 530 and I still didn’t know what time our new flights were tomorrow. Right then I got an email saying it wasn’t until noon and my mom suggested an NHL game. Andrew went on his phone and quickly booked cheap tickets to see the New Jersey Devils and Columbus Blue Jackets and within half an hour we were in an Uber on the way! We don’t like either team but we were looking forward to seeing Taylor Hall and Bobrovsky. We had great seats in Row 15 and the arena was empty! Not many fans here in NJ!? The game wasn’t great but it was cool to sit so close to the ice. 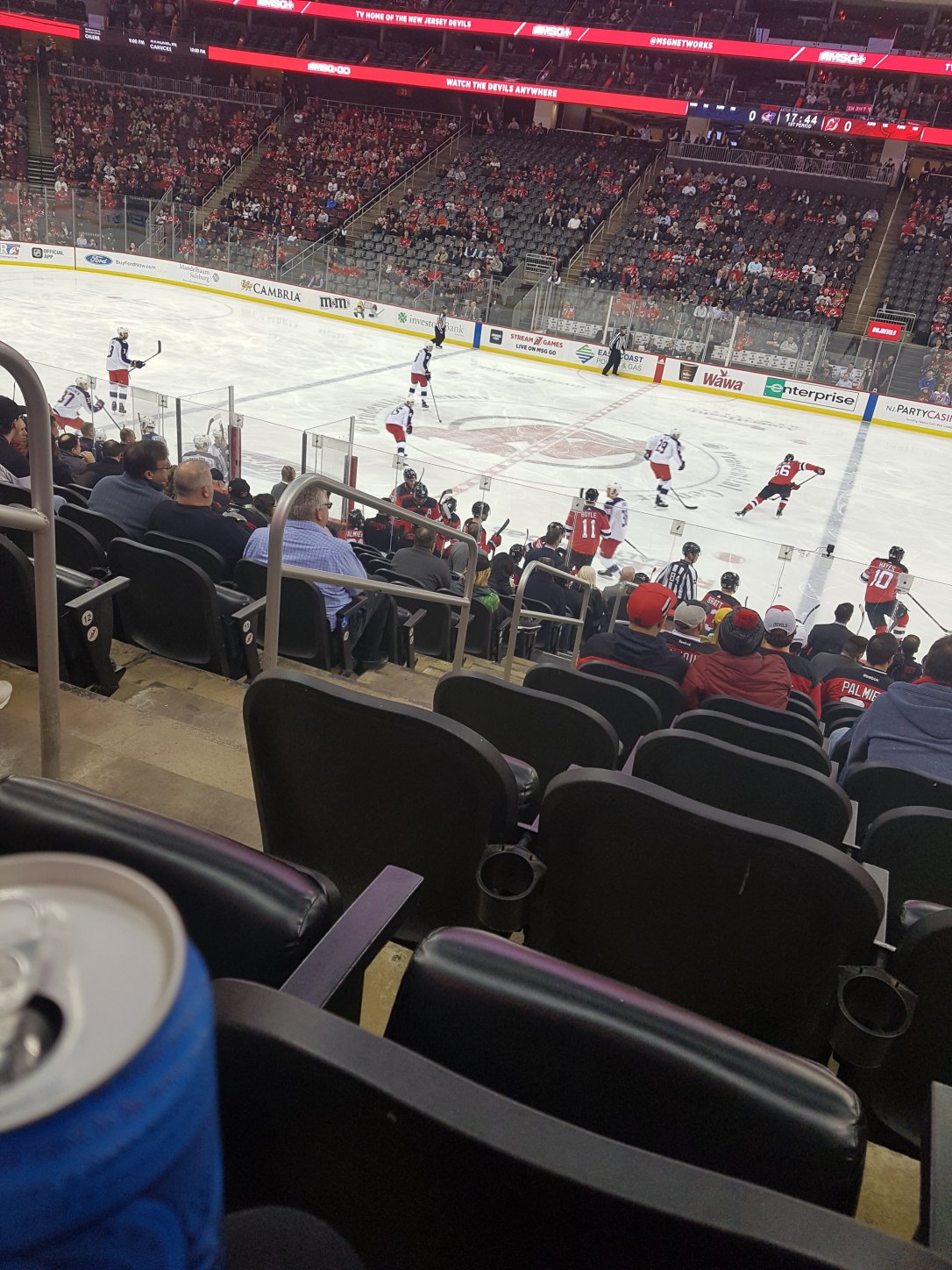 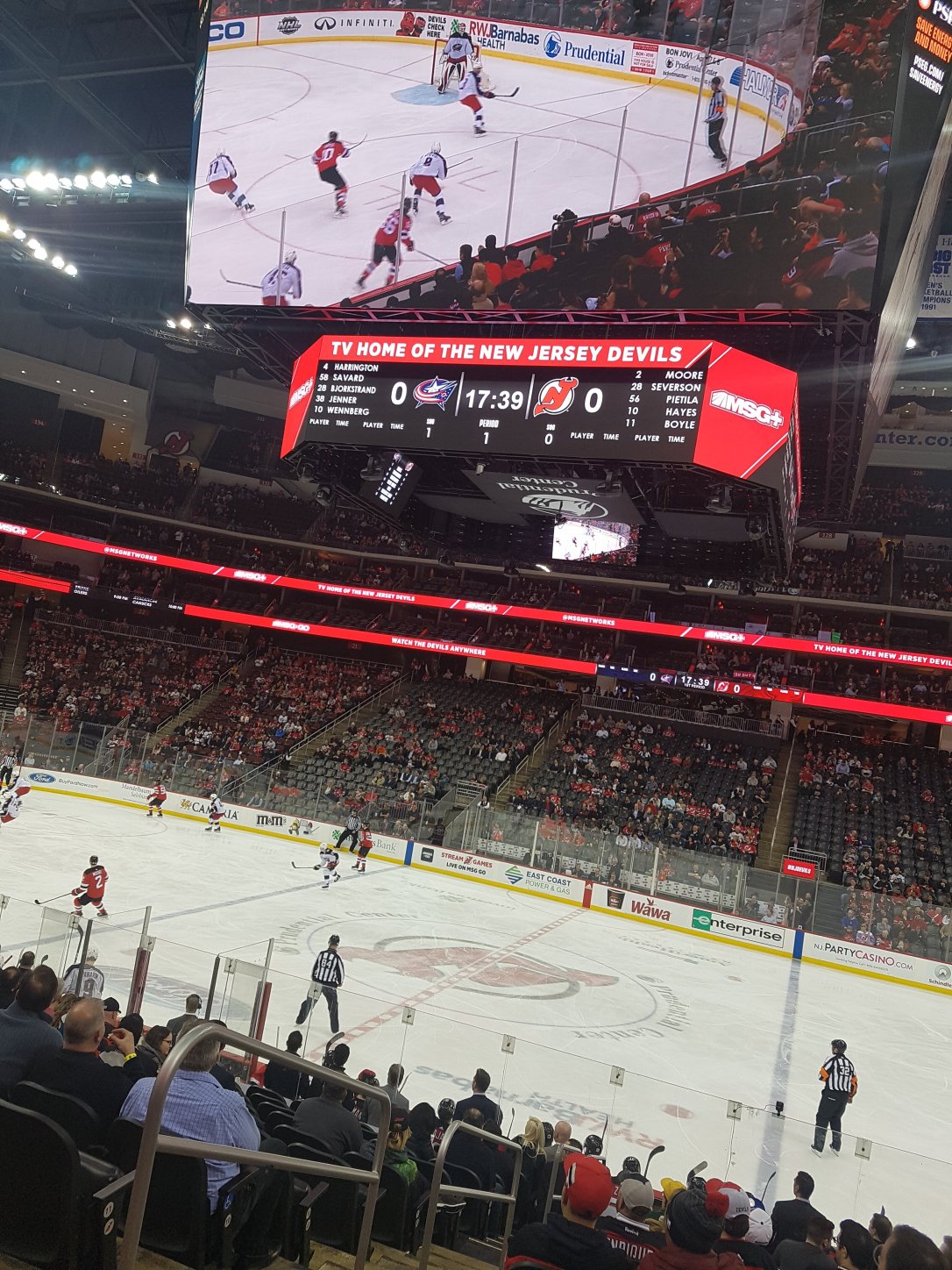 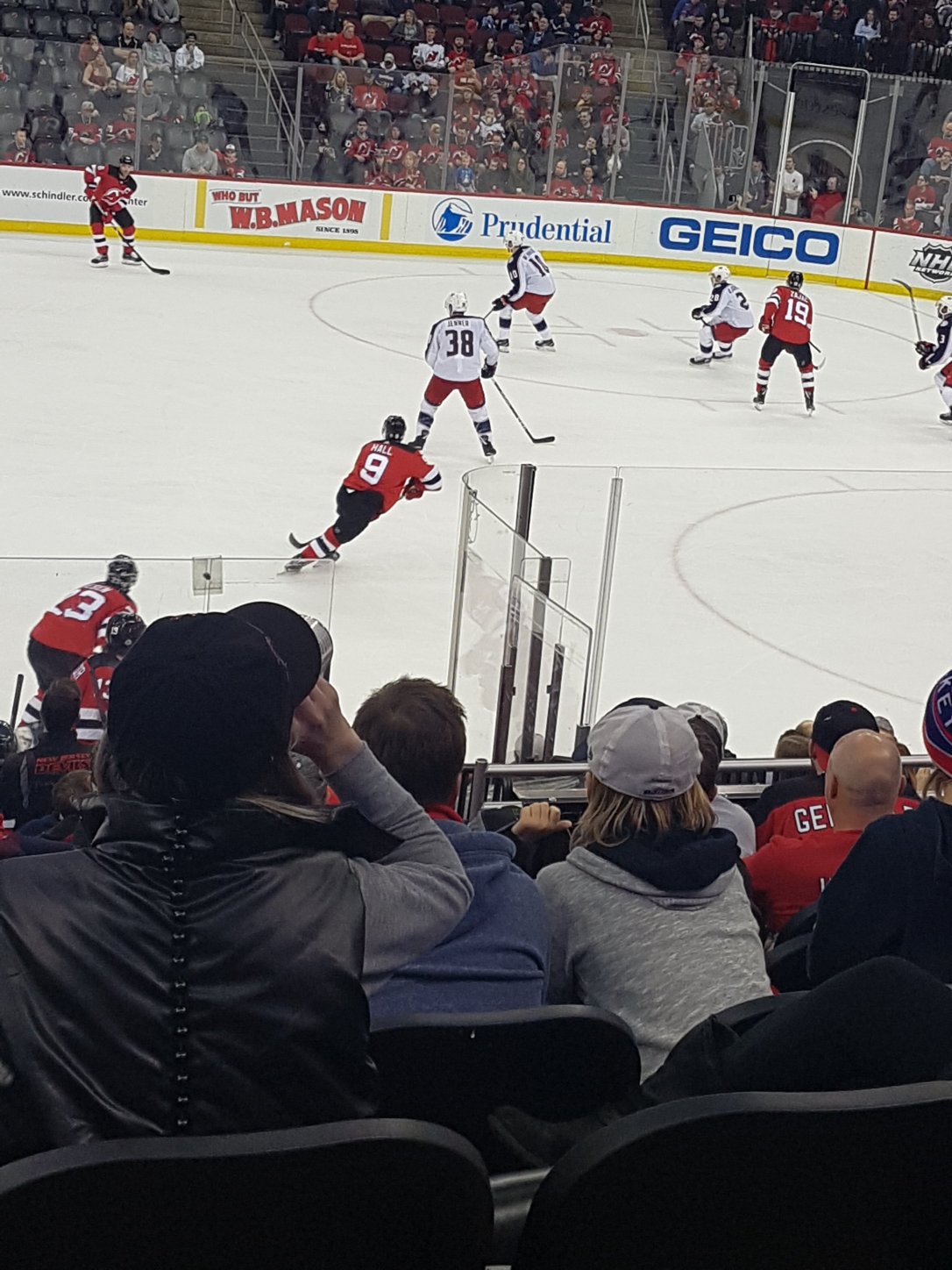 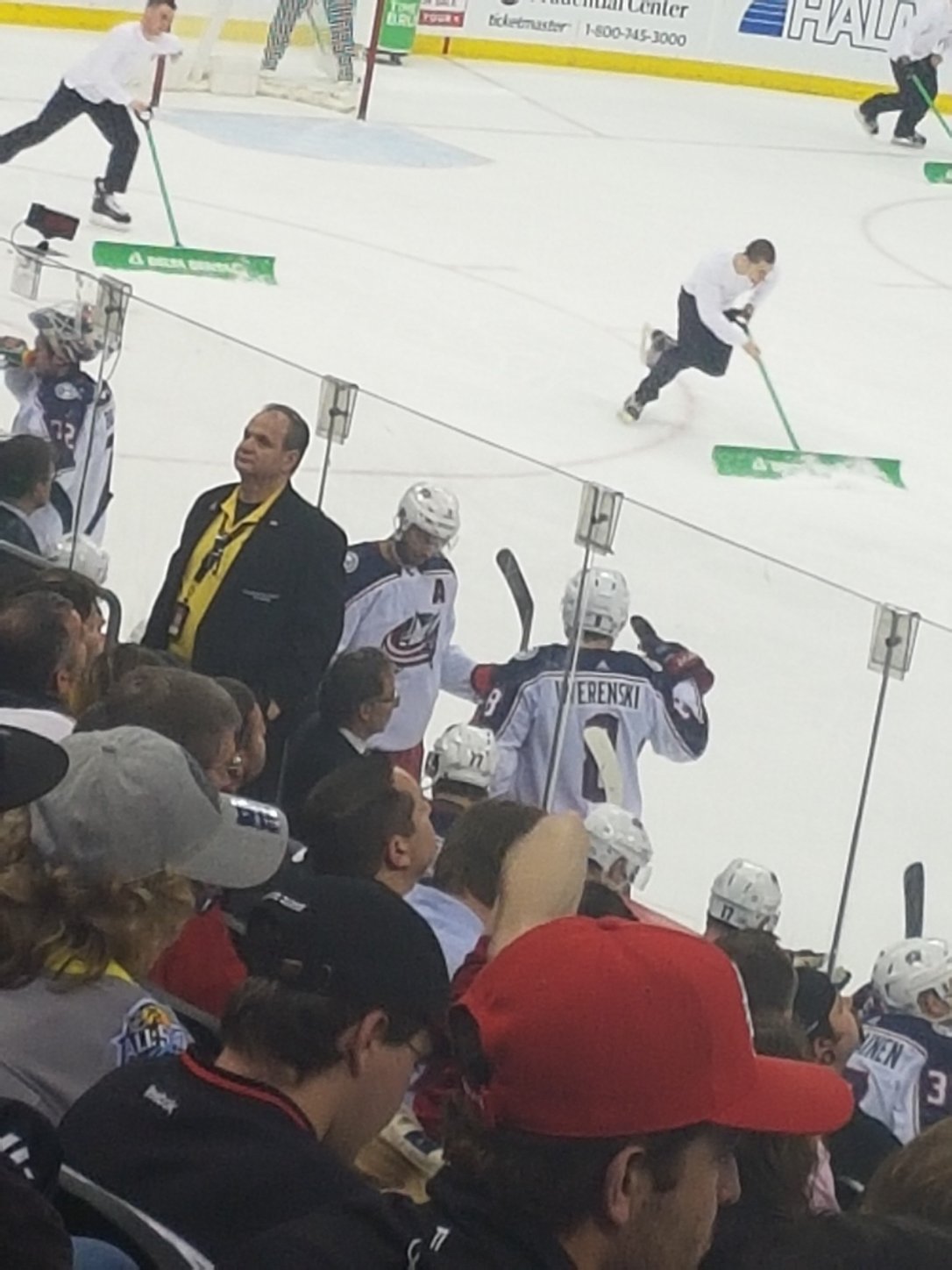 We got an Uber back to the hotel, had some food at the restaurant and went to bed! Tomorrow the hotel shuttle is taking us to the airport at 10 and hopefully we don’t have any more delays! What am amazing weekend it’s been!